Sam & Max: The City That Dares Not Sleep on Game and Player 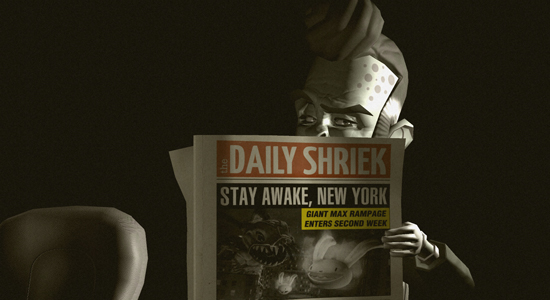 Sam & Max: The City That Dares Not Sleep

Sam and friends unite to save New York from their not-so-little buddy.

t the conclusion of Beyond the Alley of the Dolls, Max had involuntarily merged with the destructive elder god known only as Junior and begun a Godzilla-style rampage through New York. Now, Sam and a crack team of recurring characters must find a way to prevent the complete destruction of the city at the hands of their not-so-little buddy.

As foreshadowed several times earlier in the season, Sam and friends volunteer themselves to be gobbled up by giant Max in an attempt to put a stop to his possessed rampage and hopefully return him to normal. Strangely enough, their bunny buddy's insides are a lot more pleasant than expected, apparently resembling a kitschy 1960s household.

From here the game is divided into two distinct sections of play, one following Sam and his infiltration team on the inside and the other controlling monster Max.

The former is much like you'd expect from a Sam & Max game with Sam and his cohorts having to puzzle their way through Max's innards. The majority of the puzzles are typically excellent too, tapping into biological logic to create some satisfying conundrums. The episode even manages to avoid the momentum destroying finale syndrome I talked about in my Beyond the Alley of the Dolls review.

However there's one weirdly forced puzzle that spoils this otherwise superb record and really stuck out to me (minor puzzle spoiler ahead).

A situation arises early on where a heavily pregnant Sybil Pandemik is offended by Sam and refuses to help him out. Our usually easygoing protagonist has suddenly developed as disdain for parenthood and what's more his thoughts can be heard by Sybil as a convenient side effect of being inside Max. Stranger still is the solution to this situation, where Sam does a 180 on the matter after instantly growing attached to a baby cockroach that hatches in the very next room. Reading his mind again, Sybil of course finds his new found love of fatherhood and proceeds with assisting him as originally planned.

Sam's sudden objection to Sybil's pregnancy about an hour into the game just felt arbitrary and out of character for him. Given the exceedingly simple solution and Sam's speedy turn around this puzzle felt strangely arbitrary and very much like padding; something very strange to find in a Telltale game.

I was also left a little deflated by the game's conclusion. Once again, it's hard to discuss the subject without dropping major spoilers but the divergent direction Telltale pursued here didn't provide a sense of closure for this season's supporting cast and felt like a bit of a cop-out. With a season so serialized and plotted out from the start, I was expecting a resolution at least as satisfying as those of the previous Sam & Max seasons.

With a disappointing ending, annoying Max controls and that particular puzzle, The City That Dares Not Sleep is definitely the most problematic episode of the season. But it's by no means a train wreck and of course doesn't undo all of the hard work from the previous four episodes.

It's just unfortunate that The Devil's Playhouse couldn't quite end on a high note.

Sam & Max: The City That Dares Not Sleep