Remembering Halo 3 on Game and Player 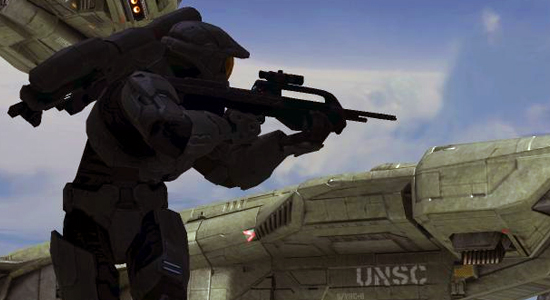 We couldn't have asked for a better resolution to Master Chief's tale.

Finish the Fight," the marketing slogan told us. While it didn't change much of the franchise's core gameplay, Halo 3 was still a thoroughly entertaining package bursting with much to see and do. Ultimately, it was a fight very much worth finishing.

Of course a big part of the game's appeal was discovering just how developer Bungie would wrap up the trilogy's epic tale.

After the political intrigue of Halo 2, Halo 3's story was pretty straightforward. Master Chief has arrived back on Earth to team up with the Arbiter. His one-time enemy and the rest of the Elite race have seceded from the Covenant and are actively working with humanity. It's a race against time to stop the deranged Covenant leader from activating the Halo rings and causing genocide on a galactic scale, prevent the Flood from spreading their infection to Earth, and to rescue a certain friend. 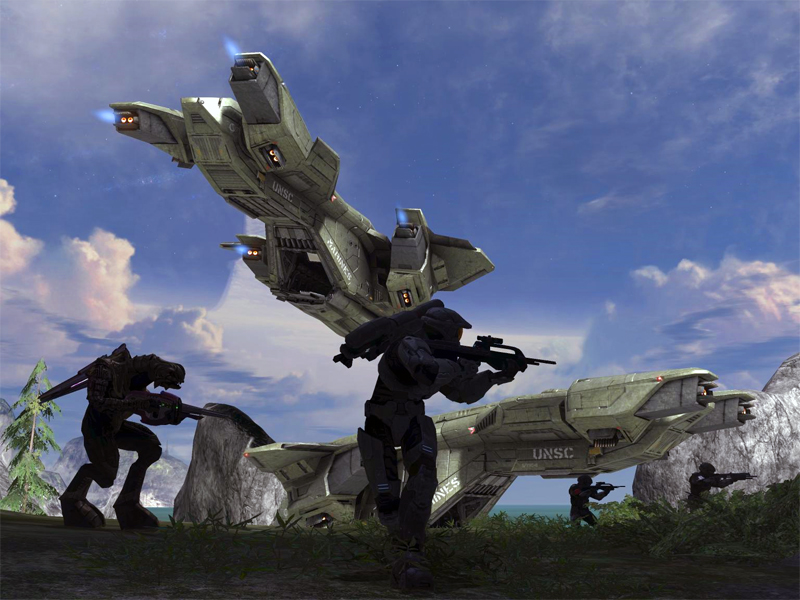 Fantastic finish: Master Chief arrives back on Earth to team up with his one-time enemy, the Arbiter.

The plot might have been simple but this ultimately helped the final campaign in the Halo trilogy. Gone was the switching between the roles of Master Chief and the Arbiter, something that had irked many fans in the previous game. Personally, I felt that Halo 2's plot was a little too complicated for its own good but this time I knew what the characters' motives were and where they were headed. Also, filler segments of the past like long slogs through Flood-infested lands were cut down to a minimum, resulting in a flowing and distilled campaign experience.

The only thing that bothered me about Halo 3's story was the subplot involving the AI Cortana. Having volunteered to stay behind at the Covenant's home city at the end of Halo 2, she has since been on the leash of the Flood's leader entity, Gravemind. Throughout the game she is treated like some sort of torture or rape victim and if that wasn't strange enough there are even intimations that she has developed romantic feelings for Master Chief. Considering her status as a holographic artificial intelligence, these elements came off as more than a little odd.

That aside, I don't think fans could have asked for a better resolution to Master Chief's tale. The epic final set piece that mirrored that of Combat Evolved's (taking place on the original Halo ring no less) was both a nostalgic and poignant way to end the trilogy. In what I consider a pitch-perfect conclusion, it turns out that the Chief survived the apocalyptic finale — and though a potential sequel is ever-so-slightly teased it's made pretty clear that it will be a long while before we see him in action again.

But what Halo 3 will probably be best remembered for is the sheer amount of content it provided.

Halo's excellent multiplayer made a comeback, bolstered with new features.Campaign play was expanded to allow four to take part cooperatively instead of the traditional two, letting four friends play as the Chief, the Arbiter and two of his Elite troops. No longer did the second player have to suffer the indignation of being the non-canon second Spartan who was never addressed by the story.

The meta-game system added a scoring element, incentivizing competitive play and increasing the potential replayability of the campaign. Halo 2's skulls made a return but in a larger role than that of simple Easter eggs. Their effects could be activated before playing a level, adding further challenge and score multipliers to meta-game play.

Halo's excellent multiplayer of course made a comeback but was also bolstered with new features. Entire match replays could now be viewed in theater mode where videos and screenshots could be saved and shared with other Halo 3 players. Forge mode allowed players to get creative and heavily modify the existing multiplayer maps, some of which where designed to be entirely manipulated for level creation. The file share system allowed easy distribution of the content players could produce in these modes, both between players and through Bungie.

Halo 3 became a huge financial success, leapfrogging many of Halo 2's milestones. It set a new record for the highest grossing entertainment product launch in history, with Microsoft citing $170 million earnings in Halo 3's first 24 hours on sale in the U.S. Over a million people played Halo 3 in its first 20 hours on sale, marking the biggest day in Xbox Live activity. It also helped boost sales of the Xbox 360 console and was even blamed by some movie studio executives for slow box office sales in the week of its release.

I've got a shotty, I've got to move: in theater mode, videos and screenshots of multiplayer matches could be saved and shared.Microsoft announced in 2008 that Halo 3 was the top-selling game for the Xbox 360, having shifted 8.1 million copies since its launch. Despite recent, fierce competition from the likes of the Call of Duty and Gears of War series, this two year old figure still places it at the top of the pile. The company also calculated that 48% of 360 owners had purchased Halo 3 though even that figure didn't take into account the number of people who have bought it used.

On top of the seemingly evergreen appeal of Halo, additional content like the Bungie-created downloadable maps and the creations shared by the players have helped maintain Halo 3's place as one of the most played games on Xbox Live since its 2007 release.

But now the eyes of both gamers and Bungie are upon Halo: Reach, the upcoming prequel set just before the events of Combat Evolved. In many ways, Reach is the successor to the trilogy — unlike 2009's series sidestep Halo 3 ODST — taking place in a scenario key to franchise lore and building on the modes first seen in Halo 3 and ODST.

It's also Bungie's last Halo, as it's handing off the franchise to pursue other original projects. From what's been seen so far, it's looking like the developers will deliver on their promise of going out with a bang. Regardless of how their Spartan swansong is received, they can take pride in having created one of the most influential and well-loved video game series of recent times.

Once again, I'm overcome with memories of the game that, for more than a year, our circle of friends played almost daily. I remember the two or three days we spent pushing through the campaign, followed by months and months of multiplayer.

Bungie's video features were, like its multiplayer in 2004, ahead of their time. My only lament is that videos couldn't (normally) be viewed outside of the game — whatever legal risks I'm assuming Bungie and Microsoft sought to mitigate, the loss to online discourse was greater.

The irony is that Bungie's successes bore competitors — one of whom has stolen my heart for now. I may not be looking forward to Reach as I did Halo 2 and Halo 3, but those sequels marked a couple of eras in my life.