Commander: Conquest of the Americas on Game and Player 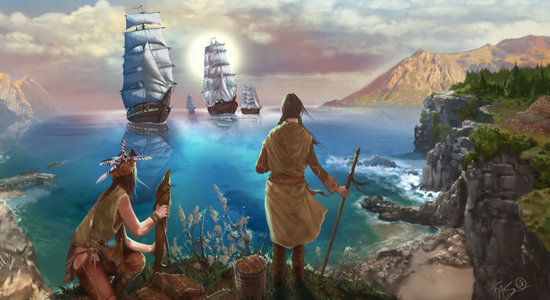 Commander: Conquest of the Americas

A good try, but worth more in lessons than successes.

have had the pleasure of playing two titles developed by Nitro Games. East India Company and its first expansion, Privateer, showed off Nitro's tidy real-time strategy and tactical engines for sending tall ships sailing to and fro for trade, exploration and, sometimes, maritime combat. Commander: Conquest of the Americas is an attempt to portray the exigency and patience of claiming the New World, as European powers rushed to settle then endured to survive. As Nitro comes up short on mechanics to distinguish colonial rule from its trade-route forte, however, its solution is a loose fit — and players may find it difficult to ignore the resulting frustration.

Games, whether in campaign or free-play modes, begin with the player's two-vessel fleet, from one of seven countries, racing competitors to seize a spot of coastal land along a wide, longitudinal stretch, as far north as present-day Quebec and as far south as Brazil.

Founded with no more than fifty souls, colonies are immediately able to collect whatever resources lie within a "sphere of influence." The SOI expands as ships ferry more and more colonists abroad, and through the construction of buildings that raise morale or process raw materials into products of the age, trade goods carried back to Europe — or sold to rivals — increase in both volume and value.

Founded with no more than fifty souls, colonies are immediately able to collect whatever resources are nearby.

Some colony improvements are driven by practical necessity and regional circumstances. Morale in the New World influences the pool of aspiring colonists in the Old World; and hospitals, for example, are required to meet the demands of rising population levels. Other checks and balances on growth include garrisons, missions, and Indian affairs offices, all natives whose responses to European settlers range from toleration and alacrity to resentment and open hostility.

The actual depiction of cross-cultural relations, however, goes no further than free-flowing materials from Indian villages (if natives are content) or reports of damage and losses following a raid (if natives are restless) — and insubstantiality is, in Conquest of the Americas, a recurrent problem.

Even in a game centered on the Atlantic, taking place long before even King William's War, the fun of political intrigue between competing powers and their native collaborators would seem vital to this theme. And yet it's almost totally absent. Who are the tribes? Their only identification is the raw material they supply. Other dynasties would occasionally offer my colonies pacts — worthless as far as I could tell, apart from the complimentary gold — or materials for which I had debatable use. Why bother to ally with or against them?

Most problematic are the Advisors — Nitro's interjection of adversity and, unfortunately, one of Conquests's principal features. Four representatives of the crown — the royal advisor, trade advisor, military advisor and archbishop — regularly make demands of the player. These are at first reasonable and sensible, even didactic: establish and populate a colony, bring trade goods back to the homeland, establish a second colony, minimize the threat of unfriendly Indians.

Where's the Go to Hell Button? Advisors seem determined to ruin you.But not too long into a game, these four will become determined to bring their sovereign's colonies to ruin by insisting on arbitrary and redundant constructions or purchases. Worse, prior expansions seem to be ignored. Erect a courthouse one month before the royal advisor asks for a courthouse, and the advisor will only be satisfied if another is built or the newly finished building — if chronological limits oblige — is upgraded.

And when told to go pound salt, advisors return with another demand; one even more outrageous. Fail to build an expensive fort with hardly a month or two to gather funds? After a smug reprimand, the military advisor orders six, count them, six warships. Chop-chop! The premise of competing political interests is sound. Execution, at an apparent disjuncture to Conquest's state of colonial or world affairs, exasperates.

Two more problems involve the game's otherwise streamlined trading system. Ships may be set to automatically follow routes of up to five destinations and effectively unlimited transactions per port. However, colonies gaining the capacity to process raw materials will convert all resources in that chain to the end product, and routes do not account for the absence, forcing players to micromanage with every upgrade of this kind. Unhelpfully, when changes are made, clicking the wrong button will result in the selected fleet resuming its path from the very beginning — with obviously hair-pulling consequences.

Finally, Nitro's ship-to-ship combat, while well-designed and fun for simulation buffs, is superfluous to gameplay. At no point in time did I expect, or look forward to, naval battles. None of the other six powers harassed my fleets. Irritatingly, the one pirate ship that ambushed two vessels appeared out of nowhere. Yes, my caravels escaped; and yes, fleet protection is important; but the random nature of the encounter could easily have been the result — had it been designed — of my choosing a more direct, and reportedly perilous, ocean route.

A good try, but worth more in lessons than successes. Commander: Conquest of the Americas left me instead wanting to play Stardock's Galactic Civilizations and Nitro's own East India Company, each being an exemplar of its kind.

Commander: Conquest of the Americas