Sam & Max: Beyond the Alley of the Dolls on Game and Player 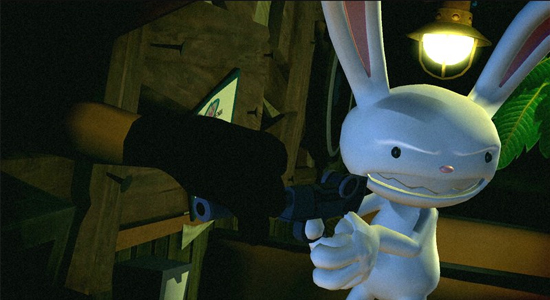 Sam & Max: Beyond the Alley of the Dolls

hen we last saw our heroes at the climax of They Stole Max's Brain! it seemed they had foiled the insidious plans of both General Skun-ka'pe and Anton Papierwaite. But the continuing plot of The Devil's Playhouse took another turn for the inexplicable when an army of barely clothed Sam clones attacked, forcing both sides to flee.

Could there be yet another force at work? Who is behind the disembodied voice known only as "Dr Norrington"? And just what has girl Stinky been scheming for the last three episodes? These secrets and more will be revealed in Beyond the Alley of the Dolls!

In terms of game play and structure, Beyond the Alley of the Dolls is probably the least remarkable episode of The Devil's Playhouse. But if you've played a full season of any of Telltale Games' series you'll probably be expecting as much. The formula is well worn at this point with Max's new psychic powers complimenting Sam's usual item combination and dialogue (the interrogation game play from They Stole Max's Brain! makes only a fleeting appearance).

Another turn for the inexplicable: an army of barely clothed Sam clones attacks!

But that's not a bad thing. The puzzles retain a balance of logic and challenge appropriate to modern adventure games and I found the episode to be the funniest of The Devil's Playhouse so far.

The story has clearly been a big focus for this third season and only now can we truly see how complex it is. To be able to write such an intricate serialized plot, split it between five interlinking narratives and wrap them up in five episodes that feel like substantial games in their own right is incredible. If it wasn't obvious before, The Devil's Playhouse further demonstrates why Telltale Games is the master of both the adventure and episodic gaming spheres.

The adventure genre at large has struggled to create compelling climaxes (after all, how do you provide a climatic resolution when the game revolves around puzzle solving?) so its not all that surprising that Beyond the Alley of the Dolls manages to lose some of the wind from its sails right in its closing moments.

While this isn't uncommon for the Sam & Max episodes I think this ending in particular is perhaps the series lowlight. It falls into the same trap that so many adventure games have for one reason or another — giving the player too many options.

While I can't say too much for the fear of late-game spoilers, let's just say the less time the player has to undertake in trial-and-error puzzling during what's supposed to be the climatic conclusion, the better. Past episodes have benefited greatly by having more straightforward puzzles at the very end, preventing the momentum from dropping off before the inevitable cliff hangar. I realize I'm asking for something that's an anathema to traditional game design but if it means preventing similar finish-line frustrations in adventure games I think it's worth developer consideration.

But this is the only gripe I can find with an otherwise excellent episode. Should the final installment maintain this quality and deliver on the epic story teased so far, The Devil's Playhouse may just become Telltale's best season so far.

Sam & Max: Beyond the Alley of the Dolls