Crackdown 2 on Game and Player 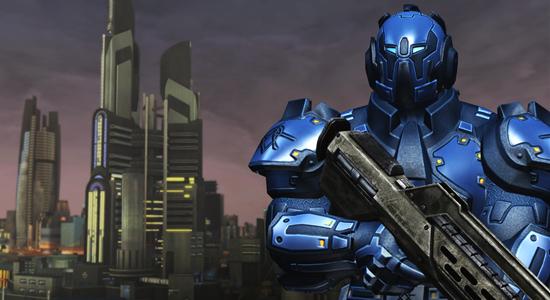 Crackdown 2 is more Crackdown. There's no two ways about it.

Its premise and location are the same as the 2007 original; players take the role of a genetically engineered operative of the Agency, a shadowy organization tasked with policing Pacific City.

A decade has passed since the events of the original Crackdown where players inadvertently helped the Agency create a totalitarian state. But the organization is hardly ruling with an iron fist. A new rebel faction called Cell has risen up to strike a blow against the Agency. Worse still, a mutant epidemic has turned a large portion of the populous into zombie-like "freaks," causing further mayhem and collateral damage to the city.

Though what occurred between Crackdown and Crackdown 2 are revealed via audio logs scattered throughout the city, the game's story is as wafer-thin as before. All Crackdown 2 really demands that you know is that the Agency has a plan to eradicate the freak threat by capturing special beacons placed throughout the city. Once activated by super-soldiers like yourself, these beacons will send out powerful ultraviolet pulses that annihilate the surrounding freak populous.

Cell forces replace the gang members from the original, though working to eliminate them isn't required to reach the end of the story as before. They're primarily resigned to populating strongholds throughout the city which when taken back provide players with weapon and vehicle drop points known as tactical zones.

Though these primary objectives are a little different this time around, leveling up your player agent remains the same. You still have five core skills: agility, firearms, strength, explosives and driving. Using these skills either in combat, through completing objectives or by collecting the relevant orbs, earns experience points in the appropriate field. When you level up a specific skill either your agent's prowess will significantly improve in said field or — in the case of firearms and driving — you'll gain access to a new piece of kit.

Combat is also identical to before with the same lock-on mechanic allowing you to target specific limbs on a target. Aside from a few mounted turrets that can be yanked from their emplacements a la Halo 3, your available arsenal is also very familiar.

The supplementary objectives from Crackdown also make a repeat appearance. Rooftop and street races, vehicle stunt rings and of course, orb collection, all return. There are a few new mission types this time though most are riffs on these existing tasks such as co-operative orbs can only be gathered with friends and glide suit stunt rings that provide an aerial spin on the vehicle based ones.

On the surface, the expanded four-player co-op and new competitive modes seem like the only major additions in Crackdown 2. But the game requires a fair bit of your time before it will reveal many of its other new features, tying most of its unlocks to your agent's skill progression.

The addition of helicopters and glide suits represent the first time you can take wing over Pacific City, though you'll need a high agility skill to reach the Agency helipad and be granted the outfit upgrade. Vehicles and items that were previously only available through Crackdown's premium DLC like the tank and harpoon gun now come as standard in the game, though you'll need to advance your firearms and vehicle skills a set amount before you're allowed to go hands-on with them.

Nighttime means something: mutant freaks come out and swarm the city streets.Veterans of the first game will also appreciate more subtle extras and tweaks like the ability to wield objects as weapons and the expanded hand-t- hand combat. One of my personal bugbears of the original, having to return to Agency HQ in to deploy the best vehicles in the game, has also been addressed: vehicles can now be airlifted to the multitude of tactical zones throughout Pacific City.

The day and night cycle — which was merely for aesthetic purposes before — now has new meaning. The freaks (as they are prone to do) come out at night and swarm the city streets. With citizens safely in their homes you have complete license to cut loose on the mutated menace. This is a subtle but smart design decision since killing civilians (whether accidently or intentionally) once again deducts experience points and eventually incurs the wrath of local Agency NPCs.

Crackdown 2 recreates its predecessor's blend of city-based sandbox madness and super hero action-RPG to a tee. By digging a little deeper you'll find numerous little additions and improvements, narrowly making Crackdown 2 a better game than the original. Therefore, if you missed out the first time around then this one is definitely worth your time.

If you're expecting something significantly different from the original you'll be disappointed. But if you set your expectations correctly going in there's a good chance you'll enjoy the same over-the-top action, character progression and orb hunting.

Is the overall package worthy of being a full-priced boxed product? After all, this is a straightforward, borderline lazy sequel that probably could have been released as an expansion pack to the original game.

That's really down to you. Personally, I was about ready for some more Crackdown and the allure of the increased co-op count from two to four players was just about enough of a draw for me. That said, if the game had been priced the same as an expansion or downloadable content pack it would have been a lot easier both to recommend and to look past its general lack of innovation.

Hey, groovy. I have been looking forward to this game. Yet, I didn't pre-order it, nor did I get it right away.
I needed somebody to tell me whether or not it really is super-fantastico, and one concern I had in mind was its sameness.