A Hermit's Tale on Game and Player 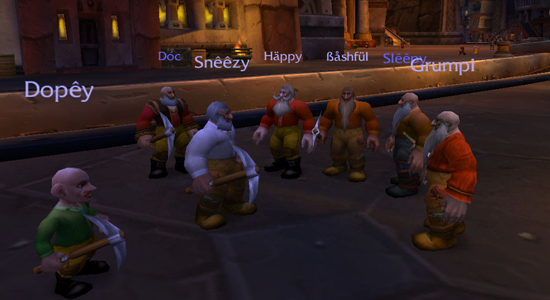 Discovering the casual side of WoW.

ike fellow Game and Player editor Mike Ubaldi, I was lucky enough to receive a Cataclysm beta invite in my inbox about a week ago. There's a whole lot to do and see in this latest expansion and the world of Azeroth has been drastically changed. After spending about four hours downloading the beta client, I did what any sensible person would do: renew their World of Warcraft account and proceed to log nearly ten hours playing old content. Don't you worry — I'll do my share of exploring in the beta, but for now, there's solo adventuring to be had.

WoW offers plenty for the casual player to enjoy.Many probably find the idea of playing a massively multiplayer game by oneself to be a bit odd — in a game where 25-man cooperative play is the only way to land the most powerful items, playing alone seems downright counterproductive. However, after a six-month stint of moderate raiding and daily play in the second half of 2009, I was left feeling unfulfilled. The grind for gear had a "keeping up with the Joneses" vibe that I couldn't beat. Returning to World of Warcraft now, I'm convinced that my path to happiness in Azeroth will feature far less raiding and far more casual endeavors.

I don't think I really understood the nature of casual WoW play until earlier this week. As I ventured through the Grizzly Hills fishing for salmon, I came to the realization that I was basically playing a giant slot machine. Every time I cast my lure, I expected salmon but hoped for something more — something unexpected. Gathering and collection in WoW can be monotonous or it can be therapeutic. It all depends on your frame of mind. The same thing that drives the hardcore raider away from these tasks is the very thing that attracts the casual, Vegas-going slot machine fan. WoW's casual demographic may include your mother, sister, brother, or even yourself. There's plenty to do in this game besides raid, and much of it caters to folks who prefer their gaming in five-minute chunks.

In catering to a subscriber base of more than 11 million players, Blizzard has done something unprecedented. The game they've created is truly a user-defined experience, and while many find it hard to play in moderation, there are others who I'm sure are perfectly content to spend ten minutes fishing each day and then calling it quits. For every top tier rogue battling in the Lich King's frozen halls, there's an entrepreneur selling potions in the auction house, an herbalist picking flowers in the fields and a role player acting out Shakespearean tragedy just outside Stormwind. For all the new content that will be unveiled with Cataclysm there's still a whole lot to discover and experience in the Azeroth that's here right now.

Even though it might not appeal to me, a dedicated series of casual features would be welcome in Cataclysm. I know a player like you, Ed, and he's pleased as punch leveling and exploring on his own.

Re: the image, my favorite part of our Seven Dwarfs afternoon was jumping up and down from the same spot on the ground, popping as if corn kernels.

I've often thought that I avoid WoW merely because I'd be unable to stop playing it. I still think that's the case.

But the cost has always been a question too. For the people who play it daily, and really are trying to suck all the nectar from the experience, perhaps a monthly fee makes sense. But I would find it difficult to justify paying for a virtual place to go fishing every afternoon.

Obviously that's hyperbole, but still, I'm interested: how do casual gamers of this (or any other fee-based MMO) justify the expense?