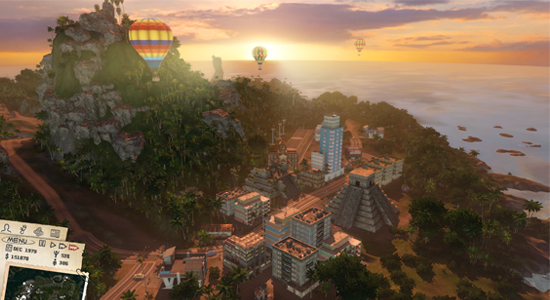 bsolute Power is a pretty straightforward expansion to banana republic simulator Tropico 3. It builds on the already fantastic original with new buildings, megalomania edicts, and an additional campaign, though everything ends up feeling somewhat incremental.

New constructions mostly consist of tourist attractions like the marina, ferris wheel and balloon ride, and lavish landmarks like the gigantic statue of Christ (à la Rio de Janeiro's Christ the Redeemer), the Eternal Flame tower, and a golden visage of your character. But the most useful addition here has to be wind turbines, which — as in real life — provide a cheap and pollution-free alternative to power plants.

You now have a megalomania score which feeds into your total point tally at the end of your reign as El Presidente. This is largely based on how many members of the new loyalist faction you've managed to nurture and how many landmarks you've constructed. However, unless you're someone who likes to compete for online high scores, there's very little relevance to this aspect of Absolute Power.

There's also an additional menu of edicts, many of which evolve around the loyalist faction and megalomania score. These include the Hola Presidente television channel that provides an annual influx of megalomania point; printing money, which grants you $20,000 but at the cost of surge in inflation; and declaring a national holiday that might sway people to become nationalists or loyalists.

The ten new campaign missions are significantly more difficult than the ones from the original game. Many feature a series of changing objectives or extreme financial, economic or environmental situations to deal with. Even Tropico veterans will be pushed to their limits here, though more leisurely players will be pleased that all ten new islands are available in sandbox mode.

There's an additional menu of edicts, many of which evolve around the loyalist faction and megalomania score.Though these additions aren't as sweeping as I'd hoped, the biggest single disappointment of Absolute Power has to be lack of development in the audio department. One of the bugbears of Tropico 3 was that the handful of catchy salsa-themed songs were limited in number and became extremely repetitive when playing the game for extended periods. This expansion misses a huge opportunity to appease this problem by not expanding the song list.

Something else that might have annoyed players before was Juanito, the energetic DJ who would periodically make radio announcements pertinent to your progress in the game. In Absolute Power, the developers expand the DJ role, adding a new person on the radio by the name of Betty Boom.

This righteous senorita quickly begins to grate on the nerves as she broadcasts vitriol in the direction of El Presidente seemingly after every other building constructed or edict issued. It was a good idea to expand the radio chatter (especially in lieu of any new music) but this one-note character will probably just drive players to mute the sound even faster. Ironically, there's now an edict to kill Juanito when it would've been much more apt to want to shut up Betty Boom.

Absolute Power doesn't drastically change the way Tropico 3 plays and could've shipped with more content. If you're in the market for more Tropico it's more than likely worth your time and money, but don't expect a radically different or refreshed experience here.

It strikes me as a "content overflow" expansion — but still, there are certainly players who want more of the same.