Sam & Max: They Stole Max's Brain! on Game and Player 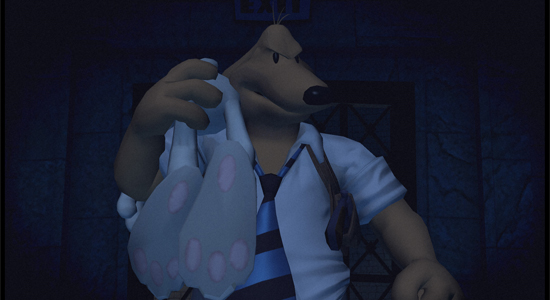 This season has hit its stride and is promising great things.

ast time, on Sam & Max: The Devil's Playhouse! The climax of The Tomb of Sammun-Mak ended on a horrific note (well, horrific for Sam and Max). Not to spoil anything — the game's title has already handled that one for me — but while Sam was on an ill-timed bathroom break someone has apparently pried open his partner's skull and stolen his brain.

With his hetero life-mate all but clinically dead, Sam goes on the warpath determined to find out who has swiped Max's vital organ and then bring them to justice. He literally becomes a grizzled private detective, swapping his laid-back attitude for a volatile temper, a five o'clock shadow and an inner monologue.

The new look Sam is mirrored in a rather different opening act for the episode. By hearing the accounts of three suspects, listening out for discrepancies and key information, the player must use this new array of interrogation options to help the lone freelance policeman get to the bottom of the titular mystery. The already Mass Effect-like conversation wheel moves even closer to BioWare's system, allowing Sam to interrupt a character's passage of speech. Here he can accuse them of lying, threaten them or even use the "noir" option to demoralize them into giving up information or items.

Okay, talk: Sam can use the "noir" option to demoralize suspects into giving up information or items.

This new mechanic is a big trade-up from the previous episode's frequently nonsensical time travel puzzles. It's logical and works like you'd expect an interrogation to. It doesn't overstay its welcome, either. The second and third acts return to familiar Sam & Max territory, resuming the point and click adventuring that we've come to expect from this season. I suspect that it'll surface again later in the season.

Out of The Devil's Playhouse episodes released so far, They Stole Max's Brain! feels the most well-rounded. It's hard to explain in-depth without venturing into late-game spoiler territory, but there's a very natural sense of progression throughout the three acts. Plot threads set up in The Penal Zone and The Tomb of Sammun-Mak are also beginning to converge as we start to see the shape of a complex and interweaving story. The jokes are also better this time around, though it's pretty clear at this point that the humor is secondary to the plot and the new mechanics of the season.

As is the norm for Sam & Max, the ending leaves us on a huge cliffhanger that won't be resolved until the next episode in four weeks' time. Still, it feels like this third season is just starting to hit its stride and is promising great things in its remaining two episodes.