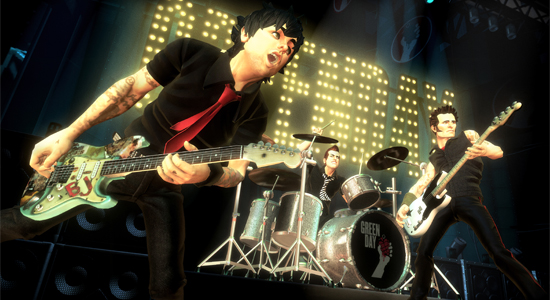 Entirely dedicated to the trio from California.

o you like Rock Band but think it doesn't feature enough Billie Joe Armstrong, Mike Dirnt and Tré Cool? Well, the gods of (punk) rock have provided for you with Green Day Rock Band.

Continuing in the vein of the band-exclusive The Beatles Rock Band, Green Day is entirely dedicated to the trio from California providing tracks from across their career for you and your friends to rock out to.

Some might consider the leap from the Liverpudlian rock legends to Green Day a mere cash grab. In actuality this isn't the case. Green Day Rock Band is another solid production from Harmonix and the band's back catalogue — though not as large or as famous as The Beatles' — proves to be a great fit for the rhythm game format.

From their early punk rock stylings to their modern rock opera sound there's good variety here both sonically and game play-wise. Lead guitarists will have a blast on powerful riffs like those found in Holiday and the high-speed chords from the Dookie album. Eager bassists will love Mike Dirnt's prominent and surprisingly varied parts that are often ranked as more difficult than that of lead guitar.

Whether you're a drummer who enjoys speed play or more laid back-beats, there's plenty here for both schools of thought. The vocal harmonies first experienced in The Beatles make a welcome return too, expanding the singing role for up to three players.

The career mode is more simplified than that of Rock Band 2 or even Lego Rock Band, so don't expect things like character creation, entourage customisation and flexible set lists. It features authentically recreated gig venues featuring era-appropriate set lists, band member appearances and even instruments. There's some nice attention to detail here, even if Green Day themselves suffer from the same plasticky caricature style that John, Paul, Ringo and George did before them.

Old standbys like quick play and the competitive score duel mode return, thankfully with all tracks available from the outset. Online play also returns after skipping the family-friendly Lego Rock Band, while the game supports all previous and future Green Day downloadable tracks for the Rock Band platform.

The game's track list presents a pretty comprehensive Green Day experience. The band's two most critically acclaimed albums, Dookie and American Idiot, are both present in their entirety. Eight songs from the intervening albums are also represented, most notably the hit singles "Minority," "Warning" and "Good Riddance (Time of Your Life)."

Only a portion of their latest record 21st Century Breakdown appears in the game despite having a dedicated venue — but more on that later.

Even if Green Day themselves suffer a plasticky caricature style, there's some nice attention to detail here.The reason behind the absence of tracks from the band's earliest albums 39/Smooth and Kerplunk is the poor condition of their master tracks, an issue preventing them from being digitized and used in the game. But given that Dookie was their breakout album, only the most hardcore Green Day fans will miss these.

Though I'm sure my friends and I are going to get many hours of fun out of Green Day as with most Rock Band products, this one does feel a tad overpriced for the content provided.

Part of the problem is that this doesn't feel like a voyage through the band's career as in The Beatles Rock Band. With only three venues on offer and no interstitial story or cutscenes, the package surrounding the core game play and song list gets older faster than usual. There are a host of unlockable photos and videos taken throughout the band's actual career, but these are readily found on the world wide web or — at a stretch — on a Green Day DVD.

Also, considering the game is selling for full retail price it seems like the two extra associated costs could have been smaller or even waivered entirely.

The ability to export all 47 tracks to your console's hard drive for use in Rock Band 1, 2 and 3 is a very welcome feature, though it will set you back 800 Microsoft Points (approximately $10/£7). The game also lacks six tracks from the 21st Century Breakdown album since they had already been released as DLC for 880 Microsoft Points. Choosing not to buy them doesn't affect achievements/trophies and the ability to finish the career, but it is irksome to have an incomplete set list and three out of the four singles of that album unavailable without extra cost.

Though these content and price issues blemish the game a little, Harmonix did manage to hit the key bullet points with a set list that probably includes all the Green Day tracks you'll ever want and the ability to use them in future Rock Band games. Quality assured — if you like Green Day and Rock Band, you're going to like Green Day Rock Band.

The fact that this one's tracks are exportable makes it a bit more tantalizing — the lack of that feature was but one of the many problems I had with the Beatles game.

I second the approval and wish to add a measure of amazement at the backwards compatibility.

I've heard that music companies demand extra fees to allow their songs to be exported for use in other titles. This might explain the somewhat hefty additional cost required in order to use your Green Day tracks elsewhere.

In the case of Beatles it already cost Harmonix/EA/MTV a ridiculous sum to use the band's master tracks - guess they didn't want to pony up more cash for the export feature.