Sam & Max: The Tomb of Sammun-Mak on Game and Player 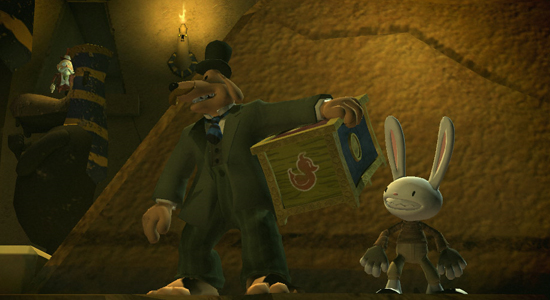 Sam & Max: The Tomb of Sammun-Mak

Or, Sameth and Maximus and the Raiders of the Lost Tomb.

he Devil's Playhouse continues to defy expectations for Telltale Games' Sam & Max series with The Tomb of Sammun-Mak. Refusing to settle into the typical structure of past seasons, this latest episode instead places us in the shoes of new characters and a completely different time period.

Without spoiling the ending to the previous episode The Penal Zone, it turns out that Sam and Max's great-grandfathers had a great deal to do with its final moments. Thanks to the convenient discovery of another of the magic toys called the Astral Projector, the anthropomorphic duo is able to use old film reels to literally relive some key events in the lives of ancestors Sameth and Maximus.

It seems that this turn of the century duo love mysteries and puzzle-solving just as much as their descendants as they quickly find themselves on an Indiana Jones-style adventure to plunder the lost treasure of Sammun-Mak. During their quest, we find ourselves in some very different locales for the series, traveling on the Disorient Express train to Egypt, the exploring the expansive pharaoh's tomb and frequenting various places in New York City circa 1901.

Thanks to the Astral Projector, the duo uses old film reels to relive key events in the lives of ancestors Sameth and Maximus.

These areas are very large for the series' standards, and greatly benefit from the Tales of Monkey Island-inspired controls established in The Penal Zone. Thanks to the greater degree of control over Sam's movement (or Sameth's in this case) the developers were able to break away from the largely static wide-angle scenes and provide a more dynamic framing. From the long and narrow halls of the Disorient Express carriages to the large, branching chambers of the titular burial grounds, Sammun-Mak looks and feels like the biggest, most cinematic Sam & Max adventure yet.

Although the game utilizes the popular television trope of having a character's ancestor portrayed by the same actor (in addition to a similar character model), there are enough fresh faces to keep the cast feeling unique and appropriate to the era. Amongst the newcomers is the adventurous baby Amelia Earhart, the exotic quest-giving Monsieur Paperwaite and a new dysfunctional Moleman family.

The change of setting is The Tomb of Sammun-Mak's main strength, providing a completely new series of scenarios rather than drifting towards the office-Bosco's-Stinky's-Sybil's-new location combination that became a little too transparent in previous seasons.

However, beneath the new, grander premise, I can't help feel that Telltale have started to get a little sloppy when it comes to the fundamentals of Sam & Max.

The Penal Zone lacked some of the comedic edge of past seasons and sadly The Tomb of Sammun-Mak doesn't improve on this. Personally, I found it to be one of the least funny episodes of the extended series so far. There were even a couple of instances where I was almost cringing when gags fell completely flat, which is something I've never before experienced in a Sam & Max game.

Amongst the newcomers is the exotic quest-giving Monsieur Paperwaite.The Penal Zone had an excuse for this, since it spent most of its time rebooting the series. While Sammun-Mak is somewhat out of its element thanks to the flashback setting, you'd still expect an improvement in this department.

The other key ingredient to good Sam & Max game — the puzzles — also left me underwhelmed and frankly a little frustrated. Thanks to the Astral Projector, the player is able to move at will between four different points in Sameth and Maximus' journey (though the fourth and final one can't be completed until the others have) and though items and Maximus' familial physic powers can't be transferred from one period to another, certain pieces of information can. This opens a new line of puzzle solving that initially seems interesting but quickly became faintly nonsensical.

Take the very opening of the game for example. We find Sameth and Maximus unable to escape from Sammun-Mak's tomb since they find themselves with no memory of the password they had to recite to open the entrance. It turns out that this is because the player has yet to complete the scene where the two originally learned the phrase . . . yet the characters must have known it to enter the tomb in the first place. Huh?

If that sounds confusing, that's because it is. Chronological sense takes a back seat here in order to support this type of brainteaser. It is a little easier to forgive in the none-too-serious cartoon world of Sam & Max, but it's still confusing and not particularly satisfying. And if you're being reductive about it, it's really just a word-based alternative to the standard formula of bringing item X to point Y.

Throw in one particular protracted sequence of puzzles that seemed to exist only to set up a character from a past season and overall, Sammun-Mak's puzzles just ended up rubbing me the wrong way. Let's hope the coming episodes of The Devil's Playhouse manage to strike a more even balance between the humor, the puzzles and the ambitious direction of the series.

Sam & Max: The Tomb of Sammun-Mak