MechWarrior 4: Mercenaries on Game and Player 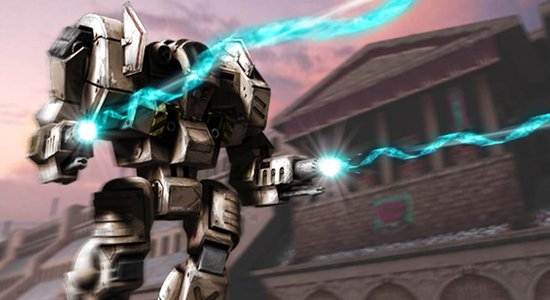 This free re-release is worth the wait.

attleTech was made for computers. This I inferred early on when a tabletop match with two friends took three summer afternoons to complete. My first introduction to game-maker FASA Corporation's game of mechanized war atop giant, humanoid vehicles — as per trademark, the BattleMech — was in 1990 with PC title The Crescent Hawk's Inception. I found translating the automated and animated clash of lasers, missiles and cannon into heavy-stock, illustrated maps and six-sided dice expansive, if cumbersome — the more complex the simulation, the more rules to follow and rolls to decide. Most of the years I was most active I spent studying my growing library of sourcebooks and designing original 'Mechs.

Blame my adolescent privation of spending money and a fast computer on obtaining the franchise's next two games four or five years later in an Activision bundle. One of the re-releases, MechWarrior, saw three sequels and several expansions over the last half of the decade. I didn't purchase or play any of these, my enthusiasm for the fictional universe having diffused some time before. A copy of Microsoft's MechAssault shipped with the Xbox I traded for in 2004, and I spent several hours playing online with friends, but the product, unattractive to a fan with its muddled canon, also lacked the tools for creation so essential to BattleTech — a need met a couple of years later with the unaffiliated but consanguine Chromehounds. 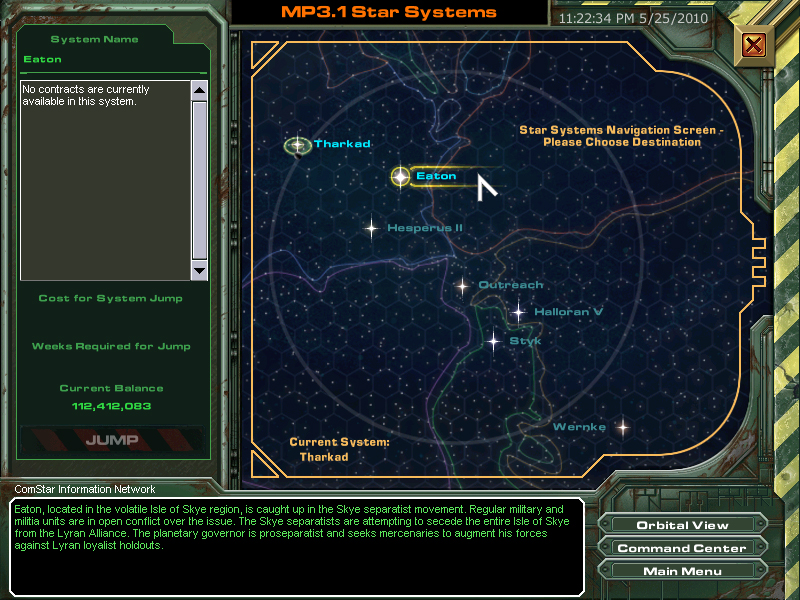 Make your way in the 31st century: the galaxy's factious status quo has resumed.

When current franchise owner Smith & Tinker announced a rebirth of the MechWarrior series last July, MekTek — a newly incorporated group of longtime amateur testers, designers and coders — followed suit with a promise to release 2002 expansion MechWarrior 4: Mercenaries freely to the public. Whatever curiosity that might have drawn me to learn more was throttled when Microsoft's legal check silenced news on the effort. And then, like that, a press release went live in late April of this year.

"Free" is not to be confused with "premium." MekTek operates on a shoestring and goodwill, and its early attempts at distribution left eager players waiting a little longer. First, servers were overwhelmed. Next, the process wouldn't work as intended. I downloaded the group's MTX download client and failed to connect for a week. Two installations went bad before my Startup menu, days later, finally contained a functioning shortcut to the game.

Although I question the wisdom of my eight-year tardy, Mercenaries is worth the wait. This game may not only herald Smith & Tinker's eventual — hopeful? — incarnation, but serve as an example of what sustains players for, and swallows them up after, a long time. 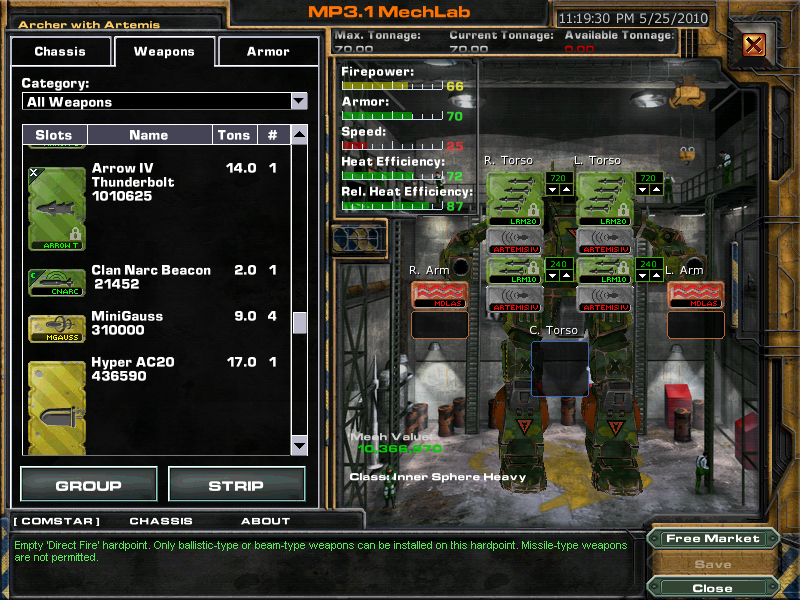 The sheer joy of subtractive design awaits in the MechLab.Mercenaries' campaign mode is reminiscent of the original MechWarrior, inserting players into the surplus boots of a small-time mercenary captain who seeks his fortune in the 31st century. After the Inner Sphere, a warring galaxy ruled by five major houses, was invaded by the Clans — martial and tribal but highly advanced descendents of exiles — a factious status quo has resumed, with bloody irredentism under all banners, and jobs aplenty for soldiers of fortune. Completed contracts mean survival and salvage of a battle's losers, enriching the player character and facilitating the growth of his pilot roster and 'Mech stables.

Narratives change according to the side a player chooses as employer. Tip the balance on a planet here or there to House Davion and the only price rivals in House Steiner will offer are on heads. Resulting plots are dispassionate — this game lacking the quest for revenge driving the protagonist of the original — but fortified with an impressive, suspiciously professional attention to military detail in fiction. Talented actors deliver smart, concise dialog — absent in the plodding mysteries of the MechAssault series, to say nothing else of other contemporary releases. When an arc has been finished, a player can return to the beginning and emerge the galaxy's shrewdest rogue through another path. 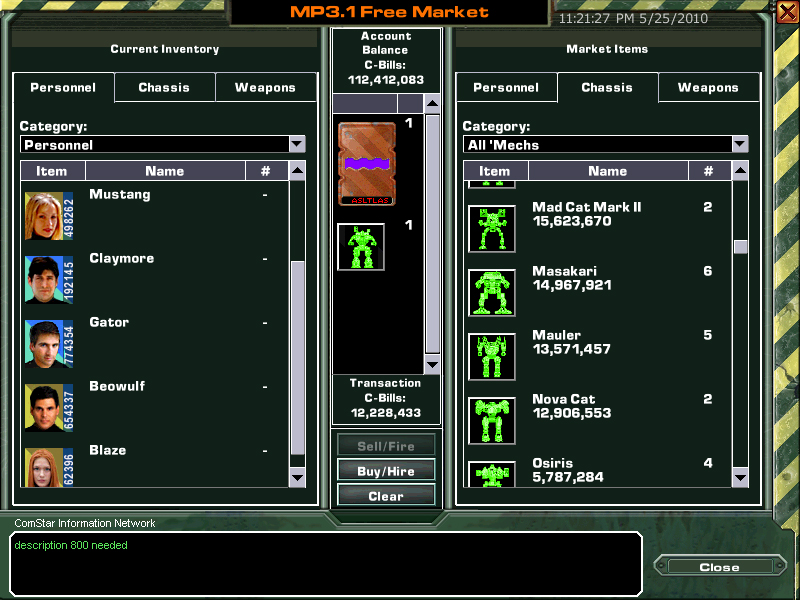 Completed contracts mean grow a player's pilot roster and 'Mech stables.Fans of the slower, simulative gameplay most recently seen in Chromehounds will enjoy the fairly complicated controls inside of a 'Mech cockpit. Graphics and sound otherwise redolent of an earlier time will hardly offend players who accept the aging charm of, say, World of Warcraft. Superior hardware certainly helps, but success depends on skill in out-maneuvering and out-shooting opponents. Up to seven AI-controlled lancemates — hired and assigned by the player for each mission — perform just as ably as the enemy. Acting out the engagements that sprawled over hours on the tabletop is a fun vindication of FASA's imaginative wargaming.

Mercenaries dominates the time of a player like myself in the garage, or MechLab, where the sheer joy of subtractive design awaits. BattleMech models range from 20 to 100 tons, the lighter types naturally suited to reconnaissance; the potential for firepower and armor increasing with mass. In this game, all 'Mechs can be refitted.

As expected, each function, offense and defense entails a sacrifice. Beam weapons — lasers, particle cannons — trade indefinite use for heat-production fire control, a caveat that inspired BattleTech's convenient tableau of pilots, especially those with curves, in scanty flight-suits. Ballistic weapons and missiles offer many varieties of payload and effective range, and run cool at the expense of limited ammunition. One nagging loophole — with so many options, how does a model retain its identity? — is closed with the use of weapon-specific hard-points, 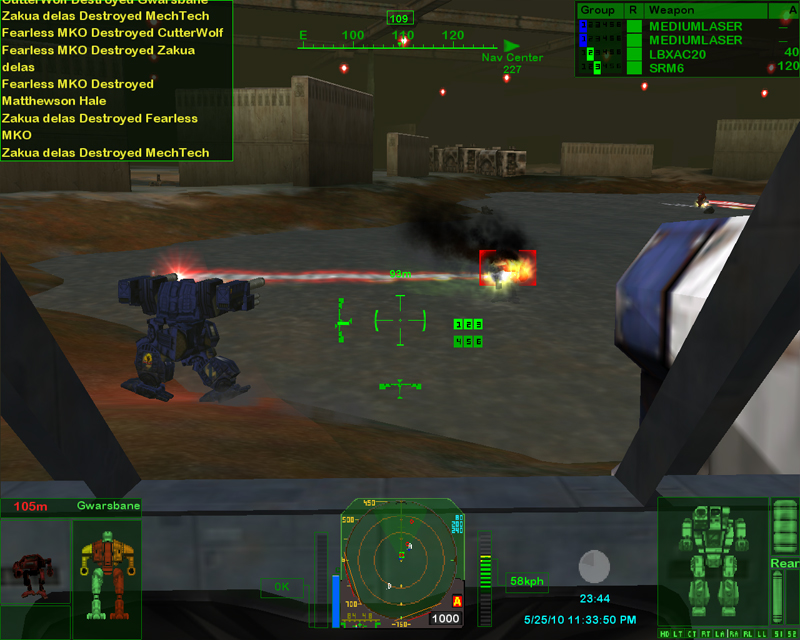 Stomp, stomp, stomp: gameplay is a fun vindication of FASA's imaginative wargaming.encouraging players to shape their designs to match the essence of a Mech. Clan technology freely mingles with that of the Inner Sphere, and insofar as most of it is better, practical players will miss out on the more challenging choices by selecting lighter, more powerful hardware every time.

There is no question that multiplayer kept the Mercenaries community satisfied all this time. Players can choose from a score of maps and more than one hundred 'Mechs to arrange team-based and free-for-all battles or objective games for up to sixteen units — including those deadly competent AI bots. Want to try re-enacting a battle from BattleTech sourcebooks or novels? Or something more ambitious? Barring host-arranged limitations, any number of variant models can be deployed, making multiplayer an ideal testing ground. The interface is hardly the most intuitive, but the vast array of options make a little extra effort worthwhile.

For the acquainted who somehow missed it, MechWarrior 4: Mercenaries is not to be missed in the months before mecha titles Front Mission: Evolved and Smith & Tinker's revision; certainly not as a gift from MekTek. For the unacquainted, the BattleTech universe is an enjoyable one, captured near-flawlessly here.