Where We Gamers Run to Ground on Game and Player 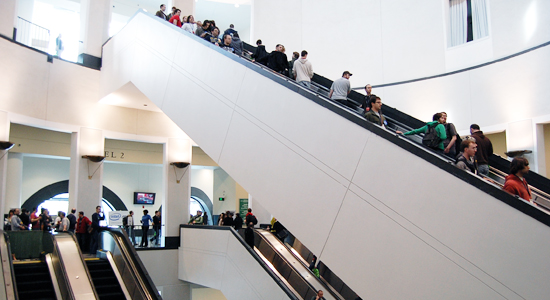 Where We Gamers Run to Ground

My thoughts on PAX six years on.

enny Arcade seems to specialize in proving that gamers are wonderful, mature, and capable people. They have arguably done more to dispel the myths and stereotypes about gamers than anyone else on the internet.

Child's Play, the Penny Arcade charity, has donated millions of dollars worth of consoles, video games, and accessories to children's hospitals all across the country, and a large part of those donations comes directly from gamers. Gamers possess a kind of creativity and energy that, while occasionally used for lazy, destructive, or even dangerous purposes, is far more often and just as easily harnessed for fun, charitable, and wonderful reasons.

It's easy to make new friends at PAX. There are rooms upon rooms full of nothing but tables, which eagerly await the next magic card, miniature, or game board to be placed upon them. There are rooms set aside for finding people to play with, called "Looking For Group" rooms, whose sole purpose is to bring strangers together to have fun. There are concerts. There are dinners, and tournaments, and tons of opportunities to revel in the community and camaraderie surrounding you. PAX, more than anything else, is about coming together and having fun.

This year, I had the special pleasure of volunteering for PAX. On Saturday, the theater I was helping to manage a panel called "Raising the Next Generation of Gamers." It was hosted by Gamerdad, a website devoted to intelligent and responsible gaming between parents and their children. The response for this panel was overwhelming. Our theater held 360 people with standing room, and before I and the other Enforcers knew it we had 500 people in line.

The unique thing about this line was that most of the people waiting were couples. There were single people here and there, but it was easy to see that pairs of people made up the bulk of the group. Some of them had children, ranging from infants to elementary school age, but a lot of them didn't. As I managed the line, joking and talking with people while compressing them against walls and wrapping them down hallways, I realized that these people took this panel extremely seriously. This wasn't a mere flight of fancy, like, "hey, let's go catch Scott Kurtz. He's funny, right?" This was a step these people were taking to ensure that they did right by their children or future children. They had questions that needed to be answered, and they were standing in line for hours not as gamers or con-goers, but as parents. More than any other moment, this proved to me beyond a shadow of a doubt that gamers are amazing people.

PAX might have started out as a mere convention, where people can come to see their favorite video games and see a panel or two, but it has grown to be much, much more. It's a celebration of gamer culture and an affirmation that we do, indeed, have our own culture. The things that we can't accentuate or maybe even acknowledge in our day-to-day lives are the things that we celebrate every day of PAX. It's a weekend when tens of thousands of people descend on a convention center, and for a few short days, turn it into a gamer mecca, full of beanbag chairs, dance parties, acronym jokes, armor, dice, cables, and fun.

During PAX Prime in Seattle, the streets around the Washington State Trade and Convention Center are adorned with banners proclaiming that PAX has arrived. Walking down the streets of Seattle (and now Boston), you feel like you belong nowhere else. My favorite design simply reads, "Welcome Home."