Sam & Max: The Penal Zone on Game and Player 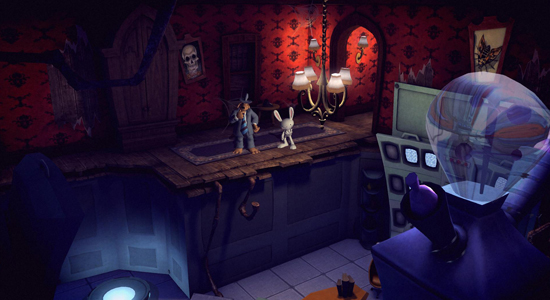 or as great as the first two seasons of Sam & Max were, Telltale Games needed to mix things up with the third to prevent the series becoming stale. The Penal Zone, the first episode in five-parter The Devil's Playhouse, proves that they're doing just that.

The story may sound like a typical Sam & Max outing. A maniacal space gorilla named General Skun-ka'peh is trying to conquer Earth and it's up to the eponymous hound-and-rabbit duo to save the day.

But the game makes it immediately obvious that things are different this time round. The opening scene begins in the depths of space with a strange voice speaking about the mysteries of the universe. Had the scene not concluded with a spacecraft shaped like a gorilla's head descending to Earth it might have felt entirely like the wrong game.

A much grittier look, with a muted color palette, film grain effect and more realistic textures.

Soon this voice is revealed to belong to a new character, an omniscient achromatic narrator who, along with his framing monologues, clearly references paranormal television classic The Twilight Zone. This kooky 1950s sci-fi vibe works well here given Sam & Max's pre-existing film noir and B-movie influences and allusions.

The Penal Zone's new art direction both complements this motif and brings the game closer to the aesthetic of the original comics. It's a much grittier look, with a muted color palette, film grain effect and more realistic textures. Ever willing to poke fun at it itself and take a sledgehammer to the fourth wall, the game has Max explain away this change by recalling New York's recent grime-adding campaign to bring it more in line with the look of a real city rather than that of "a freakin' day-care center."

Characters — especially Sam and Max themselves — also have a new range of animations and higher polygon counts that better help convey emotions and keep dialogue exchanges interesting. Furthermore, lighting is better utilized, with areas like Stinky's Diner and Skun-ka'pe's ship benefiting from some moody contrasts between light and dark.

In addition to these aesthetic differences there's a host of new gameplay mechanics for solving the case. Not only has Max acquired powerful psychic abilities since last we saw him, but he's also directly controllable for the first time in the series. Upon hitting the new Max/Sam toggle button, the game drops to the perspective of the hyperkinetic, rabbity thing where magical toys — the artifacts that grant him these new powers — can be manipulated. For example, the View-Master toy enables Max and the player to view potential future scenarios that can provide vital clues on what has to be done next.

New gameplay mechanics: the View-Master toy enables Max and the player to view potential future scenarios.The game introduces a map system this time — one of several sly references The Penal Zone makes to the original Sam & Max game Hit the Road. Identifying and opening up new locations crucial to the case is done through a new crime lab system in the back of the duo's car. By feeding two corresponding inventory items into the so-called "Crime-Tron," new areas of the city relating to these objects will become accessible.

Both this detective system and Max's powers add a new dimension to unraveling the case and look to provide a lot of puzzle-solving potential during the course of the season.

The Penal Zone is mostly preoccupied with establishing its new game play workings and as a result it's not quite as entertaining as it could have been. As you'd expect, there's a lot of handholding early on but also the reintroduction of previously established elements — apparently the developers were keen to make the start of the season accessible to those who haven't played any of the past eleven episodes. Consequently, the plot and the number of laughs are a bit lacking when compared to previous installments.

Still, the joy of experimenting with the new mechanics and soaking in the new, grittier world is enough to balance these unavoidable and somewhat minor issues. The Penal Zone does more than just whet your appetite for the coming season, but — as with all good Telltale episodes — it nevertheless leaves you hungering for the next installment.

I love this series. I've been playing it since high school. this and DoT.