Army of Two DLC: Chapters of Deceit on Game and Player 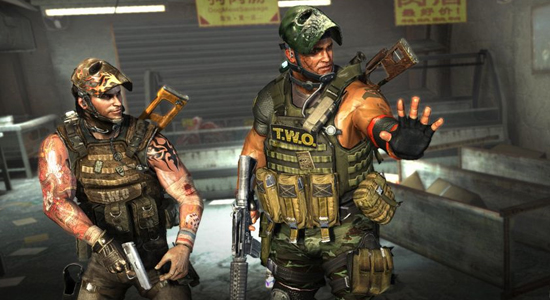 lliot Salem and Tyson Rios are right where we left them — smack dab in Shanghai aflame. After defying institutional gravity by producing a winner on the heels of a dud, EA Montreal has released its first downloadable content package for Army of Two: The 40th day, a commonsensical, two-chapter extension of the solo-or-cooperative campaign.

Part mercenary corps and part cult, the Fortieth Day Initiative occupies the ruined Chinese city, committing violence in service to its bizarre eschatology. Salem and Rios, fresh from last chapter's Hobson's choice between salvation for the many or for the few, have picked up a fresh lead on FDI's pietistic leader, Jonah. The original plan was to escape, but the two can't evade the marauding soldiers any better than they can avoid being witness to FDI's atrocities, so conscience pesters them into putting a stop to high-minded mayhem.

Wherever Salem and Rios must punch through the enemy comprises an intricate puzzle to be unwound.

Battle locations aren't as ambitious or novel as the release's — no oblique, collapsing skyscrapers or big-cat zoos. But each discrete level plays about as smoothly as those prior. Wherever Salem and Rios must punch through the enemy — from street-corner barricades to fortified garrisons — the combination of sentries, mounted gunners, mini-bosses packing heavy weapons, and streams of reinforcements comprises an intricate puzzle to be unwound.

Moreover, EA Montreal plainly offers tactical multiple-choice this time, distancing its property even further from the contrivances of the original. In particular, the "shield" ability is usable at some point on nearly every level. A team can deliberately advance, thinning ranks with clever aggro misdirection and sniper fire; or it can muscle along from behind a sturdy, arm-slung barrier. Untimely checkpoints still frustrate along the way, but with no confusing or unconventional segments — the pointless and indulgent "Back-to-Back" finally absent — a playthrough, accounting for difficulty settings, should be smooth.

Chapters of Deceit had room for only one "morality moment," but the ethical decision, cowboy-simple as it may be, follows after an hour or two of the subject's actions and consequences — where the release tended to spring these without warning. When players choose, they do so having contemplated judgment.

For a shooter of this intensity, the real reward of advancing is to hear the smart-aleck banter between Rios and Salem. EA Montreal has kept the two buddies — Salem played by Uncharted's and Prince of Persia's incomparable Nolan North — rakish and lovably meatheaded. Every pause makes a fine excuse to tell a joke. What else happens when you cross a tongue in a cheek with a license to kill? Chapters of Deceit leads the pair from a smoldering metropolis down an even darker road, but the adventure — Saturday-night action-flick passim — still entertains.

how many people play this game