The Misadventures of PB Winterbottom on Game and Player 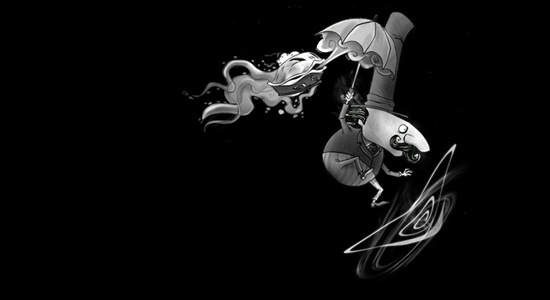 The Misadventures of PB Winterbottom

pparently I only like a challenge that yields quickly; not so much one resisting my attempts to beat it and think myself clever. The Misadventures of PB Winterbottom, begun a student project and culminated as a chastely peculiar release from 2K Play, should puzzle the shrewdest among us — perhaps leaving the rest a little brighter.

Speaking to Ars Technica, co-creator Paul Bellezza complimented 2K's deference to artist's intent when the publisher discovered Winterbottom at the 2008 Independent Games Festival. "Some wanted it to be in color, while others wanted Winterbottom to talk or be a Space Marine. 2K didn't want us to change it at all." Stylistic to a fault, the release title borrows from illustrator Edward Gorey (the leptorrhine burglar Winterbottom showing a little Arnold Roth), composer Danny Elfman and selections from the novelty ragtime library, and princes of the silent films beginning with Chaplin.

Winterbottom's wrong turn into a time-shattered flipside world forces him to be in as many as six places at once.

Screenshots hardly describe what distinguishes Winterbottom. There are platforms, there are perils, and there are treasures — pies — to collect. But most levels are single rooms; and the actions a player takes are few, yet very, very precise. Winterbottom's wrong turn into a time-shattered flipside world forces the pastry glutton to, in a sort of affirmation of quantum states, be in as many as six places at once.

Chronoberry Pies blink in and out of existence too quickly for one mad dash — so players record looping sequences of Winterbottom leaping, pulling a lever, riding an elevator, launching from a spring, or whatever else is necessary among the mastodonic Victorian gears, pulleys and pistons separating man from baked desserts. Winterbottom interacts with his echoes, but, a player will soon discover, must do so carefully lest he disrupt causality and unravel an entire chain of Winterbottoms. Timing? Indispensable.

Such a thoroughgoing assault on linear thinking is delightful and infuriating, often at once, especially with a few steep inclines of difficulty between levels. Winterbottom creates anthropogenic Rube Goldberg inventions, and players should not expect advancement to be steady. For those interims, whimsical couplets paired to tableaux — singly about subjects of the Queen gone without apple, cherry, or mince — entertain.

Those, at least, aren't too difficult to figure out. Who knew puzzler-platforming had this left in it? Here is to at least one sequel before Winterbottom claims his pulse rifle and goes colonial.

I finally got a chance to pick this up amidst the chaos that is Steam's holiday sales. I have become infatuated with the style that the creators have made with this title. I applaud them for pursuing a publisher that would allow them to stay as true to the game's original intentions as possible.

Agreed, Bryan. 2K could have thrown its weight around like the rest and given us just another platformer. Smart move.

The Misadventures of PB Winterbottom