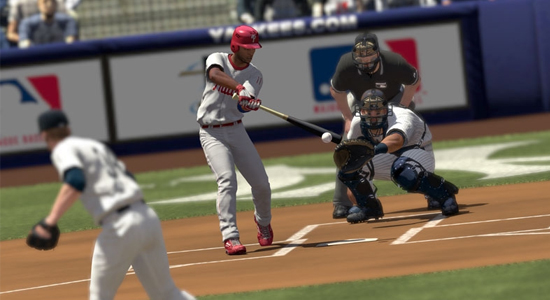 Because it feels good to play ball.

The last time I fit my hand to a mitt or swung at a pitch is further back than I can distinctly recall. Not to say America's own gentlemanly athletic abstraction wasn't a part of my youth: shortly after I could walk, my father introduced me to the game care of a company called Wiffle. Summers were punctuated by benign cousins tee-ball, softball, and neighborhood pickup; and, during my early teens, managing teams with three friends in an Electronic Arts title featuring the shrewd roughneck, Earl Weaver. A renaissance was due, and Major League Baseball 2K10 stirred the fan and fielder — not through any developer's éclat, but only because it feels good to play ball.

In sports, experience is king — in the years since I looked closely at this genre, verisimilitude to stadium contests has caught up with the urban, rustic, and alien landscapes elsewhere in the industry. MLB plays like a match televised on a broadcast network; humdrum to regulars, surely, but startling for a newcomer. Here is fantasy baseball in the flesh: after a brief exchange with data servers, a few taps can start a game using statistics and matchups of the day. Graphics, complete with whooshes, chimes, jangles appear on command as an announcer and color-man — who is bona fide garrulous — follow every pitch and play. Bats crack, crowds roar, pipe organs tease. And at the Mets' Citi Field, jets whine overhead on final to LaGuardia.

At-bats turn on throwing what the batter won't expect; or sees coming but can't hit, and hates you for.

Controls are mostly intuitive, considering transliteration necessary in the absence of motion control. Pitching, perhaps the most complicated, seems the easiest to catch on to and improve upon. The developers, however, do not clearly explain mechanics. Apart from controller mappings and on-screen graphics, players are left to trial and error in a drill mode; an inattention to learning that is throughout this game. Once arrows and animations are deciphered, delivery depends upon form. At-bats turn on throwing what the batter won't expect; or sees coming but can't hit, and hates you for. If men find their way on base, composure and acumen deteriorate. That one costless mound visit from the manager allays but can't cure, and anyway, there is a certain charm to escaping the half-inning with a called third strike.

Batting — elementary, right? Make contact between bludgeon and sphere and get safely on base. Except that in baseball, somebody who fails a little more than sixty percent of the time every season enters the Hall of Fame. In MLB, pitches approach at what appears to be a faithful model of 90 MPH, and pitchers need not throw strikes if you will try for anything else. Players, especially new ones, will concede a lot of outs on account of early or late swings of the bat — even before they contend with the staid procession of ground- and fly-outs. Drill mode is more apropos, though needlessly sluggish — the purpose of batting practice does not extend to losing ten seconds each contact to watch where the ball goes.

The game of failure: batting is a challenge. Wait until you try to pull a suicide squeeze.If only that immemorial sixty-foot-six-inches showdown were the whole of baseball. The sport's joy is bled along nine innings of sloppily performing and incompetently presented fielding mechanics. When a batter puts a ball into play, AI may or may not automate the sequence of fielding — proximity dictates, but isn't especially clear, so prudence requires handling the controller as if to make a catch or scoop. Protecting the outfield, especially against line drives, is maddening; the camera's zoom often cuts off the proper fielder, who himself must be selected before he can be directly controlled; at which point a player struggles with awkward pathing, trying to prevent Texas League singles from rolling all the way to the fences. Inexplicably, the only drill mode available is configured for MLB's My Player feature, locked into a third-person over-shoulder perspective with baseman buttons reversed. A player looking to practice must do so while the heat is on.

MLB's alternate modes may attract some players, especially those seeking management or simple continuity in play. Franchise mode allows season-long control of a team and its roster, with the option to instantly simulate games or play them through. My Player follows a player-created minor- or major-leaguer to dazzle his way to the top. I tried it and created a stout, center-fielding brave named Red Pontiac, whose farm team fed to, in all irony, Cincinnati. By completing objectives, players can increase the skill and effectiveness of their character — but, given the discrete nature of baseball, a entire game could pass without a single ball to field, and as few as three or four at-bats. As a result, each objective plays out as a sort of mission, and the disassociation from actual runs at odds to the appeal of any sport.

Not easier than it looks: the sport's joy is bled along nine innings of sloppy, incompetent fielding mechanics.Multiplayer? Purportedly. Crossed wires mean many can't join games over Xbox Live — including me. I assume online play would be characterized by insistent use of one type of pitch, compulsive base-stealing, and batters wriggling as if ataxic while an unseen hand toggles them in and out of a bunting stance three times a second; for the moment I am unable to verify.

My father, a New York City native whose inherent loyalty to the Yankees outlasted Washington, DC, but dissolved thirty years ago under the blithe charm of the Cleveland Indians, joined me for an evening of single-screen, head-to-head MLB. Arriving in a Chief Wahoo cap, he nevertheless chose a series of National League teams — as I did — on grounds that pitchers were meant to anchor the lineup and get a taste of their own medicine. My father's unfamiliarity with an Xbox controller compounded with MLB's obscure handling, but within an hour the two of us had begun a game we intended to play until the last inning. By midnight, we closed the ninth inning of our second game. By the end of this month, we will have enjoyed at least a couple more nights this way. Happy memories can be had of mediocre releases.

I bought last year's and despite the flaws, I enjoyed it but I'm still holding out for the one day that I get a PS3 and can finally play Sony's baseball game.