Flotilla on Game and Player 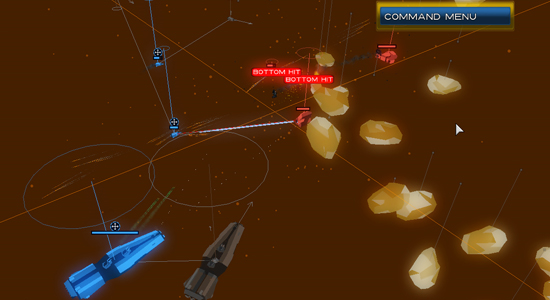 Quirky space combat from the maker of Gravity Bone.

lotilla is a quirky strategy game where you take command of a fleet of space craft and do battle with opposing armadas in three-dimensional space. Encounters are turn-based, with you assigning orders to each of your ships before watching the following thirty seconds of action play out in real-time.

Gameplay is simple once you get the hang of directing your ships through 3D space, but offers a surprising amount of tactical depth. The crux of the game is to land hits on the ventral and aft compartments of your enemies' hull, causing critical amounts of damage and speeding up their destruction. Positioning, ship rosters, fleet setups, and environmental hazards must all be considered to efficiently battle the opposing flotilla whilst keeping your own weak spots out of their lines of fire.

Adventure, Flotilla's campaign mode, is where you'll spend the bulk of your time. Your overall objective is to earn the highest score possible within seven months of game time, jumping from planet to planet destroying enemy flotillas whilst upgrading your own fleet.

But it's not just a constant stream of battles as more often than not you'll be presented with a multiple-choice scenario. While upgrades and new craft can be acquired in the right situations, you'll have to make your decisions wisely as bad choices can lead to you making enemies and initiating further skirmishes.

While it's hardly Mass Effect, this "choose your own adventure" structure is certainly entertaining, especially in combination with the game's oddball tone. Expect to encounter Rastafarian cats on the lam, an afro-sporting goddess riding a unicorn, and aggressive pirate chickens amongst other things on your voyages.

Rastafarian cats on the lam: Adventure mode is certainly entertaining.Each campaign is designed to be relatively short with only a certain amount of moves across the map permitted before the game ends. However, repeat playthroughs are encouraged in order to improve your performance and chart higher on the online leader board. They're also randomly generated so you'll never quite have the same adventure twice.

My only complaint about this mode (and the game overall) is that it could have done with an additional campaign with a longer or even nonexistent time limit. With the seven month hard-stop it's standard to finish one run in under half an hour, never allowing for enough time to build up a perfect full-sized fleet.

The game also features some neat multiplayer options. If you have a gamepad for your PC, or are playing the Xbox Live version, a second person can play cooperatively in adventure mode. You can also team up or go head-to-head with a buddy in skirmish mode, where you engage in one-off customizable battles.

Flotilla is easily recommendable to anyone with an interest in strategy or space combat games. With deeply tactical battles, replayable campaigns and robust multiplayer options, it's highly substantial for an indie game.

Part Weird Worlds, part Homeworld. Not particularly original, but if the Chopin-like piano I heard playing through the demo accompanies gameplay, this one has got a lot of character.

Rasta cats for the win! This game looks sweet.