Doppelganger on Game and Player 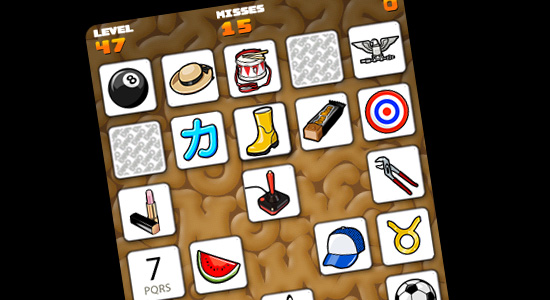 What cell phone games should be.

he first board games we were exposed to in preschool all shared a common thread: simplicity. While Candyland, Chutes and Ladders and Memory would never hold your attention for too long, they excelled at providing quick thrills. It's not surprising, then, that one of the aforementioned games has just been translated into one of the most addictive iPhone apps I've ever laid my hands on. Doppelgänger, the latest from developer One More Games, is perhaps the ultimate in pick-up-and-play experiences — a game to keep you entertained for when even solitaire is too involved.

A lot of this game's charm comes from its design.Like the games on which it's based (Memory and pairs), Doppelgänger is a simple matching exercise: flip over cards to find like pairs. The only twist is that in Doppelgänger you have a limited number of chances in which to match all the cards on the board. Each round adds more cards to the table, and special bonus rounds add variety to what would otherwise be a rather basic experience. You're scored merely on efficiency, earning a point multiplier every time you make two or more matches in sequence.

A lot of Doppelgänger's charm comes from its design — the sets of images you're asked to match are varied, each catering to different sets of life experiences. While one round may have you matching musical notes, another will ask you to pair up roundels of the world's air forces. As levels progress, these sets increase in size and are eventually mixed with one another in ways that would try even the strongest memory.

It may seem strange that someone with a penchant for the most complex of turn-based strategy titles would lavish such praise on a simple memory game, but Doppelgänger really is something special. Sure, the iPhone can play host to highly complex titles, but is that really what the majority of owners are after? There once was a time that cell phones played host to simple games that were meant to be played for minutes (if not seconds) at a time. Viewed under the microscope as a "traditional" cell phone game, Doppelgänger stands as one of the best.