Across Age on Game and Player 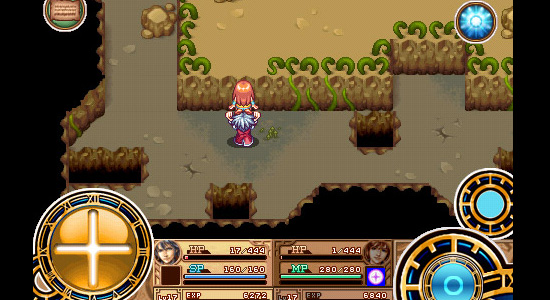 How not to control an iPhone game.

old on a second — I just chucked my iPhone against a wall and need to see if it's broken. All right, no harm done, but take this as a warning: do not, under any circumstances, download Across Age for the iPhone. What's marketed as a competent and portable Japanese-style RPG is in fact an exercise in frustration. Despite a well-formulated menu system, high quality art and a script that might even make you chuckle, nothing can overcome the debacle that is this game's control scheme.

Nothing can overcome the debacle that is this game's control scheme.Across Age seems an attractive proposition at first glance: take control of a magic user and a sword master as you travel the land on a quest to save the kingdom. Combat takes place in real-time, and you control your characters by tapping the direction you'd like to move on a simulated directional pad in the lower left corner of the screen. You'll wonder how well this will play out as you stumble through the game's starting village like a drunken sailor: two out of four times, left is left. The real test, however, comes during combat — considering you attack your enemies by running into them, you'll soon wonder if both the game's protagonists are actually pacifists. The controls for movement really are this ineffective, and it renders the game virtually unplayable.

In terms of its visual and aural design, Across Age is serviceable if not pleasant. Crisp HD art illustrates characters that are so generic they're practically caricatures of themselves. The musical score is nonoffensive and never drowns out the yells you're destined to direct at the game's inane controls. Oh yeah — did I mention that this game is nigh uncontrollable?

I'd like to think I'm being too hard on Across Age — it's reassuring to think you might be able to have a traditional Japanese action-RPG ready to play regardless of where you are. But for all the comparisons one could make to the Zeldas and Final Fantasies of this world, Across Age is neither. Developers, take note: cater to your platform's strengths. The iPhone didn't ship with a joypad, and no degree of tinkering will enable you to simulate one on screen.

Wait a moment - did we actually play the same game? I have seen the ending of Across Age and what you describe as abysmal controls is just something that takes a few minutes to get used to. Normally virtual DPads in RPGs on the iPhone react delayed, the scrolling is slow etc. In AA everything is smooth and fluid and since version 1.1 works perfect. I think a problem is that they enabled diagonal movements in the game as people with a thumb movement blockade might have issues..like Ed