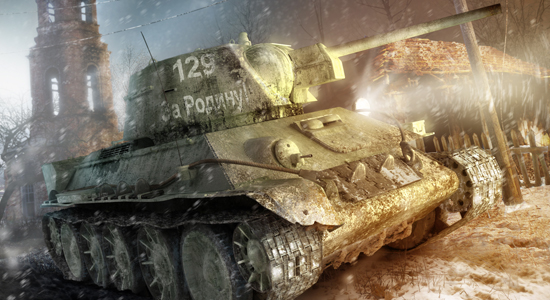 here's a certain appeal to recreating historical battles in video games, allowing players to partake in and maybe even alter dramatic moments in history. This, along with some extreme attention to historical accuracy, is really Achtung Panzer: Kharkov 1943's raison d'etre.

The game invites players to participate in the series of conflicts during World War II over the Kharkov region of the Ukraine between Nazi Germany and the USSR. It represents the short series of actual skirmishes and lets the player command the battlefield from a strategic perspective.

There's a narrow balance between realism and fun in video games, and Achtung Panzer falls heavily on the side of the former. Although a lot of effort has gone into recreating the exact conditions of the battles for Kharkov, from the correct unit rosters for

Well, yes, that is the Ukraine in winter: presentation of the game is fairly bland.

both sides all the way down to the geographically correct terrain, this has had an adverse effect on the scope of the game play. Mechanics that usually provide depth to RTS games like unit building and resource management are absent because they aren't historically appropriate. As a result, skirmishes end up feeling really quite simple, with their outcomes becoming largely determined by your initial unit deployment. Also appropriate to the scenarios are slow movement speeds, meaning that covering large distances can be a real drag.

To put it bluntly, the game play ends up feeling simple, slow and pretty dull.

The campaign, a term I use lightly, is made up of a mere six skirmishes that can be played in any order. This lack of content is underwhelming, but again, they were limited by the number of actual conflicts. Of course, these missions can be replayed multiple times with different troop deployments and tactics if you wish. Something that does puzzle me about the six battles provided is why the game doesn't force you to go through them in a linear, chronological fashion. Surely this would have made more sense given the game's historical nature. It may also have provided a better sense of context and persistence to the fighting, something you don't get unless you read the pages of historical accounts provided in the manual and the mission analysis screens.

Only six missions, though they can be replayed multiple times with different troop deployments and tactics.While there's no multiplayer in the game, there is a battle editor that allows for creation of your own skirmishes. But given the restrictions of using the pre-existing terrain and the already simple game play, there's not a lot for the more creative gamer to get stuck into.

The overall atmosphere and presentation of the game is low-budget and fairly bland. A no-frills approach is immediately obvious the first time you boot up the game and are dropped straight into the campaign menu after the company logos without any sort of introduction. The main visual highlight is the highly detailed and authentic combat units, but even those you rarely see close up. Furthermore, the game's audio is poor at best, comprising mainly of stock, low-quality sound effects and music, the latter of which is pretty sporadically used.

Achtung Panzer: Kharkov 1943 strives for historically accuracy above everything else, resulting in an objective and almost educational strategy game. As a result, its appeal really seems limited to hardcore World War II enthusiasts since there isn't much here that would be considered fun by most gamers.