MAG on Game and Player 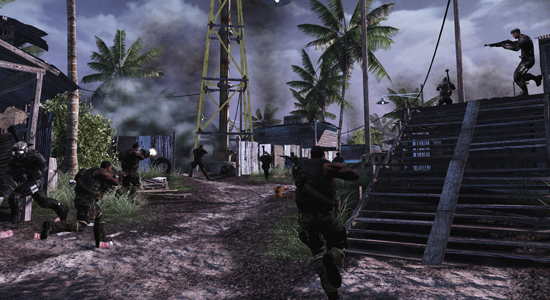 et me preface this review by stating what needs to be said: MAG is an outstanding game. Its grand scale coupled with a deep leveling system makes for the most engrossing first-person experience available on any home console. Reading about 256-player matches and experiencing them are two entirely different things — once you've been part of a game populated with a few veteran players, MW:2 will feel like a poorly planned spring break in Panama City by comparison.

MAG's maps are unique in the first-person arena. Their vast size plays some role in setting them apart from those of Halo or Call of Duty, though there's something else that's nearly impossible to overlook: their lack of choke points. Where most games funnel characters from place to place along predefined paths using terrain or other "trickery," MAG's world is generally wide open. Oddly enough, you'll still find plenty of enemies to engage in these open world free for alls — all sides are competing for the same objectives, after all, its just that holding a particular point won't be the game winning strategy that it can prove to be in other titles. By the same token, players really need to keep their heads on a swivel. By limiting these popular "camping grounds," MAG's developers have essentially made every inch of every map a potential ambush.

Further separating MAG from the pack is a character development system that's unparalleled in the genre. Moving up through the levels (and through the ranks) will unlock new skills and abilities that will completely change the manner in which you play the game — the resuscitate skill, for instance, turns your character into a field medic, an invaluable asset to any team. Once you reach level 15, you'll be able to lead your very own platoon into battle, issuing objective-based orders to your "troops" and buffing their stats and experience accruals.

When you begin playing MAG, you'll choose one of three factions with which to align yourself: the ragtag and clandestine S.V.E.R., the tech-driven Raven Industries and the American armed forces-inspired Valor Company. Balance seems to be excellent between the three factions, yet your decision will alter more than just window dressing. Weapon loadouts and available equipment change depending on your faction. This being a near-future combat experience, many weapons are fictitious in nature, but their roots are always firmly planted in reality.

So. MAG seems to have a lot going for it, right? What could possibly go wrong? Well, despite the usual server-side issues which always seem to plague a game of this scale, little that is directly under the control of developer Zipper Interactive. Ever since the Beta went public over a month ago, MAG's been plagued by an elephant in the room: voice chat. You see, as mature as PlayStation 3 owners may be, and as dedicated as the MAG user base may ever become, this remains a simple fact: the vast majority of PlayStation 3 owners do not own headsets. Sony's official line on the matter is that any Bluetooth cell phone headset can be paired with the PS3, but really, who's going to do that? The fact that Sony's own headset was available as a pack-in with the most recent SOCOM release but not with MAG is a testament to how badly the publisher has missed the boat. Sure, the diehards will slog through menus and manage to get voice chat up and running as they play MAG, but what of the "everyman" that actually drives video game sales?

MAG is a brilliant shooter experience which far too few will be able to experience as its developers intended. While I'm sure it will see a great deal of success far into the foreseeable future as a niche classic, the limitations of its platform will more than likely keep it from enjoying mainstream success. As immature as the users of Xbox Live can seem from time to time, they do have one thing going for them: an infrastructure on which to enjoy the games they play. Until Sony wakes up and starts to support its developers with a solid social network, titles like MAG will continue to be the "best games you've never played."

When I'd gotten in on the closed beta of this early on, I had only dabbled in online multiplayer shooters. I had been unimpressed with most, but something about MAG really captivated me and you've pretty much summed it up here. The wide open maps, no camping points, and character development.
True Sony's online crowd is relatively small but dedicated and not many use headsets, but I don't think that's a huge issue. You don't need to chat with your comrades to know what's going on. Voice chat has never been a factor for me when purchasing or playing a game.

Joseph for a game like MAG voice communication essentially makes, or breaks the game experience. This isn't the kind of game wherein you can constantly 'run-and-gun' like in MW2 or Halo. Proper teamwork needs to be used constantly. Case in point with the above mentioned resurection ability. If someone in your squad gets taken down they can verbally tell you where they are, and more importantly if any opponents are waiting nearby waiting for someone to come by to revive them.

Ed was pretty much right on that the PSN community as a whole has a low take up on with headset use. The decission to include a headset with SOCOM: Confrontation was a poor one, it would have been much better utilized if it had been included with MAG.

Other than that my only other issue with the game is in slight disagreement with Ed on the balancing issues. Things seem to change to a small extent based upon connection issues. Such things with are always infuriating when they occur but not really all that much that you can do with them. As well there's always my constant gripe about unlockable rewards which seem to constantly punish newer players since they lack the fancier of toys.

Still a damn fun game to play when you manage to get on a good squad that communicates.

I have the game for 5 days now, and I haven't experienced any lag or glitches. I'm sorry, but there's no other platform capable of doing this. Everything. Runs. Smooth. Everywhere. And fighting from A to B to C in a good squad can be the most thrilling experience you'll ever have. 2 tactical squads meeting up in a 128 player aquisition map & moving forward as one killingmachine, reving eachother so no respawning, taking the objective & getting the hell outta there:) MAG delivers, esp. if you're willing to deliver and fight and use skills (perks) tactical. And then you join a clan...
MAG is unique, solid, addictive & awesome. It's simple, if you want to go to WAR online, you got to play MAG. Absolutely amazing.

I have played many large scale warfare based games. Mostly on the PC. I feel MAG not only has delivered what these games offer, but exceeded as well. I have not experienced the lag that other have, I am sure at some point I will. While the lack of voice coms is there. I don't feel it limits the game. If the leader has voice and players can follow his lead the team work is relatively smooth. Too much voice com in a game on this scale can be hinderance. Trust me. I have played in events on this scale on the PC. With over 200 players logged into a voice server. All organized into 2 chain of command. I've seen erratic voice chat make things difficult for a side. I agree with Shooterfan. MAG is WAR online. Zipper has made it simple and it does allow for non-headset users to play as a team if they choose. Real teamwork requires playing together regularly anyway. Truthfully I do enjoy a break from the immature I seem to constantly run into on XBL ;)

I am a member of a very good clan on MAG, and even before that found MAG to be one of the best shooters I have ever played. But to address the issue of balancing. I totally disagree. I am a member of Valor, and compared to SVER, our weapons are like shooting a pop gun at an elephant. Compared to Raven? Our armor is a paperbag. Don't get me wrong, I LOVE the game, but balancing will ALWAYS be an issue with games such as this I'm afraid.