BioShock 2 on Game and Player 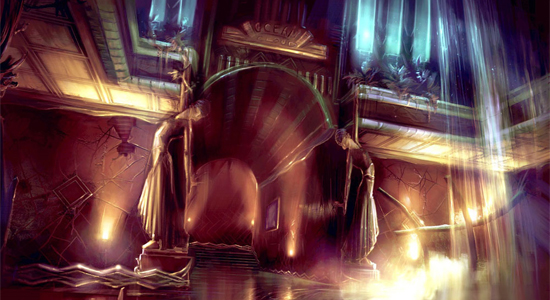 A near-flawless return to Rapture.

completely new kind of fiction, with new images, sounds, characters, premises, effects, and laws, does not come very often. When Super Mario Bros. debuted in 1985, the world had never seen anything like it before. Now it's almost impossible to imagine a world without starmen, magic mushrooms, or the sound of a coin being punched from a block. It's like trying to imagine a world without orcs, spaceships, or vampires; yet at some point in time the world lacked all those things.

It's difficult to imagine a culture without such icons, but ask anyone who was old enough to buy their own ticket to A New Hope in 1977 and you can get an idea for what it's like when one of them lands. The culture literally transformed around Star Wars, allowing it to leave an entirely new genre and style of movie making in its wake. Just like Star Wars revolutionized film, Super Mario Bros. revolutionized video games, and it was because both of them were a new kind of fiction.

The original BioShock was the first video game I had ever played that felt like a completely new kind of fiction. It was unlike anything I had ever experienced.

Success in its principle task: recreating the feeling of the first game.

The setting was beyond comparison; even Hyrule, one of the best-represented and most interesting settings in the video game world, is a largely traditional fantasy setting with villages and castles. There is nothing like Rapture; the underwater, art-deco, metropolitan dystopia in which BioShock is set.

I had never played a game that presented deep, philosophical questions about human existence; whether creativity should trump the institutions of law and order; whether true individual freedom is possible within a society of others; whether the kind of genetic modification demonstrated in Rapture threatens our identities as human beings; presented in video game format. I had never played a game with the kind of moral dilemma that BioShock, with its Little Sisters, presents the player with.

For me, BioShock was the kind of revolution in video gaming that I can only imagine Super Mario Bros. was. It was almost a paradigm shift, and it is largely responsible (along with games like Metal Gear Solid and the Final Fantasy series) for my current passion for story, characters, and messages in video games. It seems only natural that BioShock would get a sequel, and so it has. BioShock 2 lives up to the standard set by the original in more ways than one; it tells an interesting and captivating story, improves upon weaknesses of the gameplay of the original, and it even has multiplayer.

BioShock 2 succeeds tremendously in what I consider its principle task: recreating the feeling of the first game. More than anything, the process of navigating Rapture is what made BioShock great. There was an incredible amount of detail that went into making Rapture such an original, captivating, thought-provoking, and rich setting: the sounds, the color palette, the lighting, the rubble, the graffiti, the splicers roaming the halls, the audio logs, the bosses, the announcements over the PA system . . . all of it combined to make you want to explore and plumb the depths of Rapture with surprisingly little in the way of in-game motivation. Exploring every nook and cranny in Rapture does not have a significant in-game reward, but I left no hotel room, apartment, or safe unplundered in the original because I was dying to see each and every square inch I was able to.

Familiar yet better: the experience of exploring may be marred if you've spent time there already, but gameplay is much improved.Rapture is equally well represented in the sequel. It feels like Rapture, and so I applaud 2K Marin for achieving that. The only flaw that I can find in this game is that it's a sequel at all. Rapture is the kind of place that can only be described as awe-inspiring. Coming around the corner in the bathysphere and seeing Rapture's art deco skyscrapers cast against the ocean floor in the original BioShock was an experience that I'll never forget, and no matter how hard the sequel tries to impress, it's just never going to recreate that feeling for me. The experience of exploring Rapture is just a tiny bit marred by the fact that I've spent time there already, and even though 2K Marin did an outstanding job of crafting and choreographing the setting, I just don't have the same sense of wonder, dread, and excitement that I did when playing through the game.

However, playing through the game is quite a bit more enjoyable now, as there have been smart upgrades to the controls and combat in several different areas. Switching between plasmids and weapons is a thing of the past. Weapon upgrades not only increase your weapon's effectiveness, but add completely new abilities. Same with plasmids. You now have a dedicated melee attack button. Vita-chambers can actually be ignored, which means that death sends you back to your save file. This was a big improvement for me, as the relatively consequence-free death mechanic in the original was one of the only complaints I had. The Pipe Dream-style hacking mini-game is removed as well, replaced with a system that keeps you in the action while you take control of familiar turrets and cameras, which rectifies another issue I had with the original.

The story this time around, while not quite as compelling and personal as the one in the original, is interesting. It does not suffer from the formulaic feel that many sequels do, nor does it feel tacked on to the original like an expansion pack or DLC might. Rapture has been recreated for the sequel in a way that feels both original and familiar, and that's extremely difficult to do when you're revisiting the same setting in a sequel. Rapture holds just as many secrets, surprises, and danger as it did before, but there's very little overlap between the two games in terms of where you explore and what you find.

The story lacks the twist that the first one had, but I think it's stronger because of that. It's a more solid narrative throughout, with far more interesting characters and relationships. Sofia Lamb is a far more interesting villain than Frank Fontaine, and Andrew Ryan's legacy lives on, almost casting him as another character. In BioShock 2 you play as Subject Delta, the first Big Daddy to be successfully paired with a Little Sister, resulting in a psychic link and a symbiotic relationship that should be familiar to anyone who played BioShock.

Rapture holds just as many secrets, surprises, and danger as it did before — with a minimum of overlap of the original.The game opens with a startling revelation, which results in Delta committing suicide, only to awaken in a Vita-Chamber ten years later. He begins receiving psychic messages from his Little Sister, Eleanor, begging him for help. This is what gets the ball rolling on the story, and it's what makes Subject Delta a more interesting protagonist. In the original, the protagonist has no relationships to anyone. He's thrown into Rapture alone and navigates the city by himself, except perhaps for Atlas on the radio. His motivation is always unclear, and although the story does address and explain this issue, there were times in the original where I was left wondering, "Why am I doing this, again?"

Subject Delta, on the other hand, is spurred onward through the story because of his dedication to Eleanor, which creates a much more believable motivation for the character. You know exactly why you're braving the chaotic and dark hallways of Rapture. It also creates a much more enjoyable, meaningful, and powerful story. The ending of BioShock 2 does not disappoint, and critics of the first game's ending will be extremely pleased to play this game to its completion.

In addition to single-player, which meets or exceeds the standard set by the original BioShock, BioShock 2 also has a multiplayer mode. The multiplayer does have a backstory, casting you as one of several splicers fighting in the ADAM-fuelled civil war that tears the city apart just before the events of the original BioShock. The multiplayer is also story-driven; as more experience is gained by playing the same character over and over, audio logs and clues about that character's past are revealed. It feels firmly rooted in the world of BioShock, and this is largely due to the story elements.

As far as gameplay, the multiplayer is clearly inspired by Modern Warfare, with levels, ranks, achievements, weapons, plasmids, and perks all tied to your combat prowess. Between the "level-up" mechanic and the urge to reveal more about your character's past, it creates quite an incentive to play. The multiplayer maps are solid and the gameplay is satisfying, with plasmids and weapons working together with the terrain on the map to produce some interesting and strategic results. Players who enjoyed exploiting the relationship between water and electricity to fry splicers in the original BioShock will take a particular glee in BioShock 2's multiplayer. I don't necessarily know if it's a necessary add-on for the game, but it isn't done badly. Quite the contrary.

BioShock set one of the highest standards in recent memory for a sequel to match, and ultimately BioShock 2 meets or exceeds that standard. It recreates Rapture in a way that's both original and familiar, which is always a challenge for any segmented work of fiction, whether it's Star Wars, Dune, or The Legend of Zelda. It tells a story that is interesting, compelling, powerful, moving, and shocking, with characters that have more depth than the first. It is just as fun, nerve-wracking, and exhilarating to play as the original, with the same mixture of horror, exploration, and fast paced combat. On top of all that, it has a solid multiplayer component. As far as sequels go, it doesn't get much better than this.

You've installed a great deal of faith in me, Jace. I had a rollercoaster relationship with the first (which ended in me absolutely loving the game), but I couldn't see how forcing a trip back to Rapture could be made interesting. But I think I get it now.

I understand what you mean by it not quite feeling 'new,' and while that can be a bad thing, it also means I'm not quite as terrified by this game as I was by the original.

Then again, that could also have something to do with actually /being/ a Big Daddy this time around. I feel powerful, and I feel like Splicers really make no difference to me one way or another - probably not unlike a real Big Daddy would have felt while roaming the corridors and hallways of Rapture.

Sorry to spam, but one more question: did any of you feel like money and ammo were much easier to find this time around?