The Sky Crawlers: Innocent Aces on Game and Player 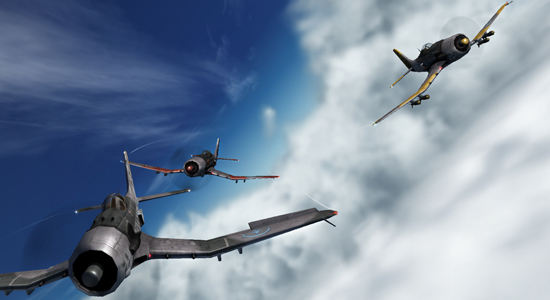 he anime tie-in: regardless of how much you enjoy watching Japanese animation on the big screen, video games based on these works have a deserved reputation for awfulness. With a few exceptions, I feel pretty comfortable making this generalization — games based on anime stink. It seems almost counterintuitive. These two mediums are linked so closely in Japan, yet somehow, game developers never seem to get things right. Of course, The Sky Crawlers: Innocent Aces isn't the work of just another game developer, nor is the film on which it's based the work of just another Japanese director. Project Aces and Mamoru Oshii seem made for each other, after all, and for the most part, this Wii exclusive doesn't disappoint.

The Sky Crawlers: Innocent Aces is an arcade flight game developed by the masters of the genre. Unlike Project Aces' other work, this title takes place in a fictional past, jet turbines and sidewinders having been traded in for propellers and guns. This transition is seamless, no doubt aided a great deal by the terrific aircraft designs featured in Oshii's film. The Sky Crawlers menus and briefing screens will feel familiar to veterans of Project Aces' long-running Ace Combat series, but the game's default control layout is as foreign as they come — a correctible foible which I'll go into in a moment.

The same story hooks which came off as laughable amidst Ace Combat's photo realism seem natural and poignant when packaged alongside The Sky Crawlers cell shaded graphics. Once again, a great deal of credit here should be dealt to Oshii's work, but somehow, this story's conflict between military-industrial complexes gels seamlessly with Project Aces' traditional mission design. In the world of anime, over-dramatization is par for the course — in turn, those "serious" moments seem a bit less comical here. In The Sky Crawlers, two huge military corporations spar over resources and public opinion in a 1940's-era society. Players fill the role of an eternally youthful pilot, taking to the skies to fight in vague conflicts over a detached populace. Your character's childlike appearance is a stark contrast to your fighting nature — you probably could grow older, but when fighting's all you know, what's the point of a future? The Sky Crawlers serves as a prequel of sorts to Oshii's film. The characters are different, but we see that this futile conflict between capitalist superpowers was the same in the past as it will be in the future.

Tapping the 'A' button at the right time can quickly place you behind oppopnents.Like far too many third-party Wii games, The Sky Crawlers visuals slightly under whelm — muddy textures and muted colors do little to endear one to the game, especially when compared to Project Aces' last Ace Combat title on the Xbox 360. Thus is the cross that Wii games are forced to bear. Unless you have the might of Nintendo and Miyamoto San behind you, there's only so much you can do to make your b-list game look "stunning" at 480 lines of resolution. Despite aliasing and a lack of detail, The Sky Crawlers' visuals are still perfectly serviceable. Of course, poor graphics rendering isn't the only obstacle standing in Project Aces' way — the developer's approach in handling Wii motion controls is both unique and unexpected. Rather than concentrate on the Wiimote to provide control of the player's aircraft, the developer has shifted focus to the Nunchuk. That's right — the angle at which you tilt and rotate the Nunchuk controls your aircraft's motion, while tilting the Wiimote fore and aft controls speed (akin to a plane's throttle). While it takes a great deal of getting used to, the end result is far more intuitive than you might expect. I'd liken it to controlling Mario Kart using the Wii's steering wheel accessory — while series' veterans may complain about the change, novices should have no problem picking up and playing the game in this manner. In the event that you can't survive without Project Aces' traditional twin-stick control layout, there is hope for you: plug in an original Gamecube controller or the Wii's classic controller, and the game will control just like any other twin-stick flight game. Unique and novel or familiar and precise? It's your call, and I promise not to fault you either way.

Despite glaring graphical shortcomings and default control settings that may infuriate diehard fans of the arcade flight genre, The Sky Crawlers: Innocent Aces has a lot to offer. It's not everyday that Wii fans get to play a well made flying game on their platform of choice, nor is it every day that an anime title successfully transitions to the gaming medium. Chalk this one up as another win for the folks at Project Aces.