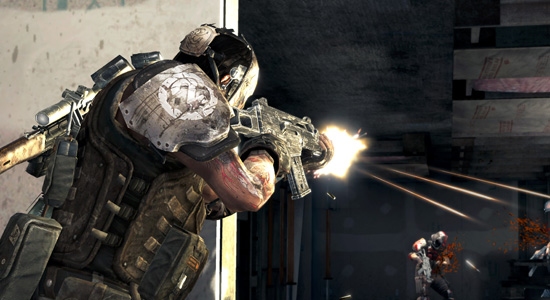 The return of a less-than-dynamic duo.

ust as a note, EA: attaching a riot shield to the front of SAW doesn't do too much for accuracy. For this and other exercises in the absurd, check out Army of Two: The 40th Day for Xbox, PS3 and PSP. Admittedly, we were rough on this cooperative shooter's first outing. Here's hoping the sequel gives us a few more reasons to play.

Sky Crawlers: Innocent Aces would be a throwaway anime tie-in if it weren't for its developer — Project Aces has long been an ace up the sleeve for Namco Bandai, consistently producing the best arcade flight games for home consoles. This Wii release may be without a traditional twin-stick control scheme, but I've got a hunch these bright developers have found a way to utilize the Wiimote's finer qualities.

Sega once again brings the Olympics into our living rooms: Vancouver 2010 features a wide variety of events that aim to get you excited about the world's games. Sadly, only Xbox and PS3 editions arrive this week. Wii fans should check out Mario & Sonic at the Olympic Winter Games.