Darksiders on Game and Player 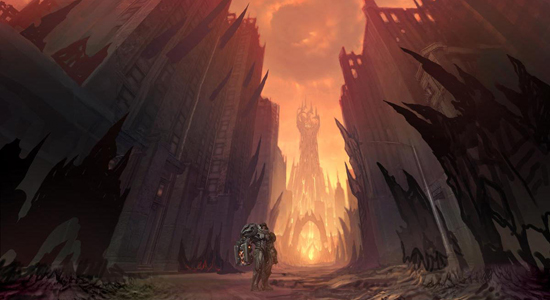 A well-executed and enjoyable, if derivative, package.

arksiders is a game that wears its influences on its sleeve. Legend of Zelda, God of War, and Panzer Dragoon are just some of the games that have been cribbed from, whilst its story is heavily grounded in Christian mythology. As a result, it isn't going to win any awards for innovation, but it does successfully manage to bring many disparate forms of game play together in a well-executed and enjoyable package.

Players are dropped into the role of War, one of the Four Horsemen of the Apocalypse, who is tricked into triggering Armageddon early. Caught between the ensuing battle over ownership of the Earth between the denizens of Heaven and Hell, War is quickly defeated and loses all his abilities. Years later, he is sent back to the post-apocalyptic world in order to exact a penance on those responsible for this chain of events and to clear his name by any means necessary.

War: one of the Four Horsemen of the Apocalypse, tricked into triggering Armageddon early.

The game's biggest and most obvious influence (aside from the Bible perhaps) is The Legend of Zelda series, particularly in the dungeons of the game. In each of the four expect to find puzzles, chests, a map, a new item, a boss to kill it with and a life bar extension upon completion. Even some of the weapons are immediately recognizable like the hook shot-esque Abyssal Chain and the boomerang-like Cross Blade. Despite this clear inspiration, it rarely feels cheap thanks to some really well-designed levels and taxing puzzles. It also doesn't hurt the game that we're not exactly inundated with Zelda clones; the only high-profile one I can think of from recent years is Okami.

The combat of Darksiders has drawn comparisons to gory hack-and-slash titles like the God of War, albeit it simpler. Confined entirely to one button, it initially feels simplified in the battle-heavy first hour or so of the game. As you purchase more upgrades and combos for War and begin to head into the world's dungeons, it thankfully starts to feel less of a grind and better integrated into the flow of game.

The comparisons don't end there, with a gryphon-riding section inspired by the Panzer Dragoon games as well as a mythical version of the gun from Portal, which even uses orange and blue colored vortices.

The game's influences rarely feel cheap thanks to some really well-designed levels and taxing puzzles.For as well as Darksiders combines and executes these different modes of play, it's partly this derivation that holds it back from be a truly top-tier game. It doesn't have the charm or depth of most of what it borrows from, with its anti-hero, over-the-top violence and its sinister take on religious mythology not likely to capture your imagination like, say, a Legend of Zelda game.

It's not aided by the fact that the post-apocalyptic city you are confined to is by and large linear and not very interesting to inhabit. You won't find epic vistas, hardly any wide open spaces, and barely any signs of life outside of things trying to kill you and the handful of NPCs integral to the plot.

A few technical problems also haunt the game. The Xbox 360 version in particular suffers from a series of minor niggles like the occasional screen-tearing, frame-rate dips and some generally poor anti-aliasing. While these aren't damaging enough to hurt the overall experience, if you have the choice and achievements are inconsequential to you, go for the smoother PlayStation 3 version.

Darksiders does all lot of things right, but they've ultimately been done better many times before. It lacks the depth any of these source materials originated, and doesn't bring in enough of its own personality and creativity to reach that top-tier of gaming besides the likes of God of War and Portal. It's an enjoyable romp while it lasts, but this damaging lack of a soul means you probably won't feel compelled to revisit it like you would the classics in years to come.

Although it looks like even War's horse uses anabolic steroids, the game's bulked-out visuals look appropriate. I'd love to ride that charger.

Sadly the horse riding only really comes in to play in two boss encounters. You can ride him in set places in the 'overworld' but these areas are so small its hardly worth the hassle.