Army of Two: The 40th Day on Game and Player 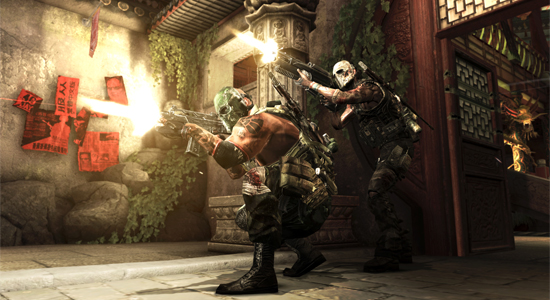 The only direction to go was up. They went there.

A Montreal gave Mark Twain's adage a switcheroo — Army of Two occurred first as farce, then tragedy. The developers apparently needed to work through a chest-thumping, gimmick-laden tactical third-person shooter before finally realizing a game that captures the guts and panache of a summer action flick. Nearly two years later, how many will give Army of Two: The 40th Day a chance, enough to justify a sequel more deserved than graced?

After trudging through the original title's affected controversies of modern war and military financing, mercenary heroes Elliot Salem and Tyson Rios spend all of The 40th Day in one city, fighting one enemy, yet taking players on a colorful, engrossing ride. The two are caught in Shanghai when meteor strikes tear the city to rubble and ash. Like buzzards to the stricken, soldiers of fortune enter Shanghai, eliminating civil authority and killing whomever they can't control. At first caring only for their own survival, Salem and Rios cut a path through the urban ruin to confront the misery of frightened citizens — and then the man responsible for it.

Simplified and more engaging: combat must be what EA originally had in mind.

At once the game shows improvement. The epilogue is delivered with subtle inflections — yes, Shanghai is in flames, but not a word needed saying. Salem's opening line draws a laugh. EA Montreal maintains its principled stance against modesty; the two's underground contact could have retired from NFL defensive play and wears even more fulsome battle gear. After salutations, the contact presents Salem and Rios with their gear which, garish and missing only NASCAR-grade logo placement, could actually serve as urban camouflage. Guns start firing within minutes, and the verbal tutorial — previously offered by the disembodied skull of Gunnery Sergeant Hartman — comes succinctly from the contact. "This is you, this your partner, these are the guys that want the both of you dead."

Combat must be what EA Montreal originally had in mind. Muscling through hostile gunmen and collapsing, burning buildings is a matter of simplified, and thus more engaging, teamwork. Two players — or one player and an AI partner — continuously trade aggro, or the enemy's malign attention, as they cover, flank, and bum-rush. All but a handful of 2008's contrived "moves" have been discarded — players can act in concert when they damned well feel like it. Boosting over walls and wrenching open gates no longer feels obligatory; "back-to-back" occurs exactly twice; and reviving the other under a hail of bullets is easy to do. Obstacles haven't been dropped simply as a pretense for vaulting with the A-button. Environments — inventive ones, like the façade of a leant-over skyscraper or a peculiar zoo run by a Chinese patriot with a long memory — are entirely traversable.

Environments — inventive ones — are entirely traversable.Having played the first with Ed Kirchgessner, I relied on an AI-controlled Rios to complete The 40th Day. He was impressive: tactically shrewd, situationally aware, and a marksman. Responding to D-pad commands, AI teammates usually know the difference between advancing and drawing fire, moving forward only when ground has been secured. Gun battles very nearly approach Bungie Studios' "30 seconds of fun" underwriting the dynastic success of the Halo franchise. Players still contend with bad guys at preposterously close quarters, and in spite of a backdrop depicting competing mercenary groups, enemy types, appearances and behaviors vary only slightly throughout. But firefights are enjoyable and challenging; rarely frustrating or unfair. Targets react to fire; they jackknife or recoil when hit, some of them even staggering or crawling for one last, spiteful pistol shot. Do cutthroat gunmen abruptly neglect attackers when bullets fly from another direction? Doubtful in real life, but not in action movies. Vindication for the aggro system comes from the fact that fooling the enemy is ineffably gratifying.

As for other gratuities, weapon customization sees more practical value than novelty this time; yes, you can line your G36 with zebra stripes, but accessories like scopes, muzzles, and stocks enhance and even specialize a primary weapon, special weapon, and sidearm. Beware, however. Automatic checkpoints allow seamless and uncomplicated progression but later on in the campaign arrive at a few exasperating intervals. Moreover, weapon upgrades are liable to any unsaved activity: stop short of a checkpoint and every upgrade made since the last segment disappears. Still, with items unlocked with campaign completion and other achievements, retooling your arsenal in this degree is worth the extra sweat.

Guess who? Fooling the enemy is ineffably gratifying.Another way in which EA Montreal looked more closely at the duo is ethically. Five times during the campaign, either Rios or Salem faces a moral dilemma with two choices, one of which must be made by the player (or, if co-op, one of the players). Double-cross? Be merciful? Do what's asked instead of what feels right? Consequences are immediately revealed in comic-art cutscenes from third-person omniscient, each poignant. At several more points, players may rescue Shanghai citizens who have met the wrong mercenaries at the wrong time. Salem and Rios can try to gun down the heavies or subdue them, earning rewards for each hostage spared.

Substance confers depth to Salem and Rios. After the first game's superfluous and indulgent backslapping, players couldn't be sure if the developers truly wanted them to root for the guys. With a sharper script and meaningful characterization, they now know. Respectively sardonic and Neanderthal, the men's camaraderie — even their high-fives and paper-rock-scissors mini-game — however lowbrow, is genuinely endearing. "You're supposed to avoid elevators in a fire," protests Salem; to which Rios chides, "And you're supposed to avoid bulls—t in a warzone!"

The plot could be considered desultory. No villain emerges until near the end, and as Rios himself asserts, the two haven't any higher priority than simply escaping the devastation. But adventurers live through pastiche, and the raucous zigzag of The 40th Day suits these two well. Episodic content would fit even better. In 2008 EA Montreal aimed at profundity and missed; but found it this time through the plainspoken. Rios, on refusing to put down an escaped tiger: "I don't shoot animals. People, fine; animals, no." Smiles Salem: "You're a good man, Charlie Brown."