The Saboteur on Game and Player 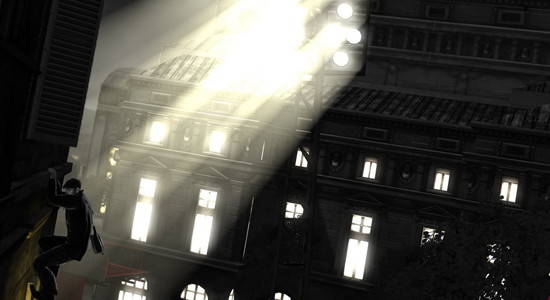 hirty years on, now, and the industry nudges the line of verisimilitude with sophisticated colors, lights, and textures — but hasn't mastered production of a workable game and compelling story? Sometimes, survival of the fittest rightly intervenes: Pandemic Studios closed as it released The Saboteur, a sandbox stealth-action title trapping the spirit of L'Armée des Ombres inside a doltish, fat-budgeted feature as produced by Jerry Bruckheimer and starring Nicholas Cage.

A promotional card was blown inside the game's box. Even if I hadn't pulled it out and read it, Pandemic would have reminded me upon startup that as an owner of The Saboteur, I was privy to such features as (in no particular order) nudity, a VIP room, and new hiding spots. I declined. Are you sure? responded the dialog box, Because these really are choice knockers. OK, that isn't what it said. But it may as well have. The first character on screen was distaff, buxom, and only modest enough for pasties.

Enter a Parisian cabaret, gamely occupied by Germans who also occupy the capital of France. To a sultry chanson, the camera pans along a red-orange, smoky glow of velvet booths seating patrons who take in the wine, song, and soothing languor. It stops on a coarse man in a flat cap drinking at the bar, suddenly joined by a Frenchman. The Frenchman greets him; he answers in an Irish brogue. This is Sean Devlin, who wanted only to race cars before the war, and his conscience, take him into the French Resistance.

Beautiful but dumb: Pandemic's conjury of Paris is interrupted by tepid play and muttonheaded dialog.

But for the brogue, he and the Frenchman, Luc, sound alike: without a doubt, the characters are played by the same voice actor, who can be heard when nearly every other man in the game speaks — a lot to be said of the actor's versatility and, maybe, Pandemic's priorities. Take the script. Were conversations as heavily speckled with the f-word back then? Did the young and debonair have telephone numbers to trade? Should Nazis invariably be linked to abominations in the laboratory?

So Devlin joins Luc, introducing players to the game's primary mechanics: walk or cruise the streets of Paris, brawl, slip past in disguise, run, or shoot and shoot and shoot. I began, already with some loss of confidence. Before asking to meet at a car outside, Luc admonished Devlin to be careful; the Germans are watchful. With Devlin up and able to walk, I was a little apprehensive at the semicircle of enemy soldiers raising their glasses to the woman onstage. But I worked up the temerity to see what might happen — a quick, instructive end-of-game? Devlin crept onto the stage, behind the chanteuse. Nothing. He went down the catwalk, right up beside her. Nothing. Blocked the Germans' view. Nothing. I took Devlin outside.

As Devlin drove Luc down the street in nighttime drizzle, Luc forgot what he said about watchful Germans. Two Wehrmacht hassled an old woman on the sidewalk — Luc leapt from the car and rushed them. Now it was time for me to enter Brawl Mode. Devlin exited the car. He was immediately brushed by another car that had swung up from behind, bloodied and shaking in a convulsion of ragdoll physics. By this time, one of the soldiers had approached. I tried throwing a punch or kick, but the German landed his own. Pushing several buttons in panic, I accidentally led Devlin back into the driver's seat of the car. The German stepped away and rounded the grill. Common sense triumphed: one squeeze of the right trigger and the car lurched forward, killing the first soldier. I waited a moment, turned the wheel a little, pulsed the left trigger and backed up over the second. And that was Brawl Mode.

Oh, what the hell: stealth often isn't worth the effort when objectives can be completed under a hail of bullets.Much in The Saboteur follows downhill. Because stealth-action can only approximate the subtleties of deception and scrutiny, the genre excels when it conforms to the consistency of a puzzle's rules, however inventive and dynamic developers may want to be. Players guide characters through complex routes, even mazes, of patrols and other hazards. Furtiveness is rewarded, conspicuity punished — but each method should be made evident after reasonable study. The Saboteur punishes players by wasting their time with unclear, cluttered stakeouts and unrealistic, unfair consequences.

Devlin obtains his disguises, naturally, from waylaid Germans. When uniformed, Devlin can sprint or run, at the risk of raising suspicions; or staidly walk and close to within arm's reach — ideally. Most paths to an objective are so crowded with soldiers that a covert approach simply isn't worth the effort, particularly when objectives can be completed under a hail of bullets. The practical alternative, unfortunately, doesn't satisfy. What happens when the jig is up? Germans conflate into a hive-mind and, using wire communications of the era, somehow remain aware of Devlin's precise location and deploy troops from every direction. Ducking out of sight, possible in a game like Prototype, won't work. Instead, a player must stream across Paris and penetrate an arbitrary, red radius to elude Devlin's pursuers.

The final insult comes not after an escape but a successful mission. When Devlin removes a disguise, he apparently discards it; players must go hunting for another one. If Pandemic couldn't bear seeing this feature used only once, why not exploit the purpose of uniforms — the conferring of rank and privileges — and require different dress for deeper access? Meanwhile, missions pay in contraband and feats earn perks, and a lot of time seems to have been spent on the concept and presentation. But with such gameplay, what does it matter?

Floor it: driving is one of the game's few delights.Pandemic introduces driving by practically mandating that a player have Devlin commit a carjacking — if for no other reason than because the guys at Rockstar make millions off of it — but sitting behind the wheel is one of The Saboteur's few delights. Parked cars are around for us fuddy-duddies. Rewarded with sports cars and more, Devlin can "collect" a fleet of musclebound classics whose throaty engines simply beg to be pushed.

The city itself is gorgeous, bleak, and flourishing all at once, Pandemic having conjured la belle Paris. As Devlin strikes back at the Nazi occupation, he transforms entire blocks from monochrome, sodden noir to blue-skied, flush days. Once, I brought Devlin out into the sun. To the north, storm clouds were visible from the street. If Devlin were to climb onto the top of a nearby building, could I get a better view? I tried, and found one — rolling umber against a russet skyline, stamped with the black and red of a zeppelin drifting lazily above.

Mere moments, otherwise interrupted by troubled, tepid play and muttonheaded dialog hurrying along a slapdash plot. Is The Saboteur's Paris somewhere we might want to visit? Yes, but under very different circumstances.

That last line in your review says a lot, but still I can't quit the urge to want to pick this game up. Say I see this game for twenty bucks, Michael: Would you think it a logical choice to pick it up then?

Maybe worth a rental? The introductory stages take some dedication to endure, and the open-world mechanics are interesting but not seductive, like GTA, Oblivion or even Borderlands.