Picnic Panic!! on Game and Player 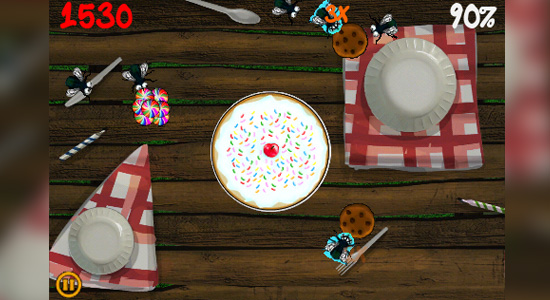 Too basic, even for a mobile game.

or the first time in my life, I can finally say it: I'm ranked number one in the United States at a video game. This day's been a long time coming — I could taste it ever since I turned over a score in Asteroids back in 1987. Still, the accomplishment is a tad bittersweet. You see, I'm actually the only registered player of this game in the United States. Indeed, I'm ranked thirteenth in the entire world at the moment. This is the state of iPhone game development. This is Picnic Panic!!, the latest from Assyria Game Studio.

When Apple's App Store launched in mid-2008, it looked to be a goldmine for independent developers: every day, a new story emerged of a dude in his basement who was made into a millionaire after developing a hot new application. Of course, for every success story, there were hundreds of decent, respectable apps that got lost in the shuffle. While the core mechanics behind Picnic Panic are sound and its production values solid, I fear it lacks the addictiveness, polish and staying power of the iPhone's hottest games. Assyria has authored an application that's perhaps too simple for its own good. More proof of concept than game, Picnic Panic may have been successful as a single mini game within a larger collection. On its own, its purchase is hard to justify, even considering a reasonable $.99 asking price.

For such a simple game, it ships with a robust social client.

The story's a simple one — your picnic spread has come under assault from a variety of insects, and it's up to you to stop them. Bugs are squished by tapping them on the iPhone's screen. Larger insects may take multiple taps, but most can be splattered with a solitary poke. Points are awarded with each successful squish, and a multiplier is earned by destroying more than one of a particular insect species in series. The game ends once all the food on the table has been consumed by the insect horde. This is about as deep as the gameplay gets — while there's a certain appeal to the game's Atari-era simplicity, most iPhone owners are bound to be turned off when the same money will purchase games that are far more complex and engaging.

In terms of overall production quality, Picnic Panic is sound. Both the game's backgrounds and the insects themselves are rendered rather charmingly, and an unassuming soundtrack accompanies you through four levels of play. A surprisingly robust achievement and social networking client keeps track of high scores and allows you to compare your progress against that of others around the world. But cute bugs will only entertain for so long on their own — Picnic Panic's swarm changes only in size and speed as the levels progress, and eventual failure seems to be the only possible outcome. A premise that would have held up beautifully in the late 1980s today feels rather quaint. Picnic Panic's mechanics may not be flawed, but it's simplicity makes it easy to pass by in an oversaturated marketplace.