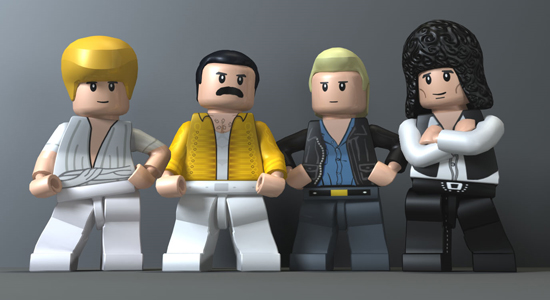 ot satisfied with taking the plastic instrument-based rhythm genre into band exclusivity with The Beatles Rock Band, series developer Harmonix has teamed up with Traveller's Tales to bring another spin on the formula with Lego Rock Band.

For the most part this is Rock Band as you know it. The majority of series staples return such as the tried-and-tested band game play and unrivaled downloadable content. However, Lego Rock Band deserves credit for adding some worthwhile tweaks and additions outside of the cutesy Lego aesthetics.

Story becomes the main mode, incorporating the World Tour campaign for the previous games in the series whilst adding with some interesting new features. First and foremost, you now inhabit your own headquarters dubbed the "Rock Den." It's essentially a glorified menu system that lets you do everything World Tour allowed you to do, but with the ability to customize it with unlockable decorations and see your band and entourage hanging out, it's one of the many neat extensions of the Rock Band experience found in Lego Rock Band.

Rock Power challenges proceed like humorous interactive music videos.As the name implies, story now plays a large role in the campaign. While your band is still essentially on a journey to become the greatest in the world, this is fleshed out through the wacky yet completely dialogue-less cutscenes found in past Lego games. At the heart of this narrative are the new Rock Power Challenges, crescendo events that require the power of rock to solve. Tying in with a particular venue and moment in the story these play identically to a regular gig, though proceed like humorous interactive music videos. You'll find yourself fending off a giant octopus, bringing down a condemned skyscraper, and defending a medieval castle, amongst other things. My favorite one is the haunted mansion challenge to Ray Parker Jr's "Ghostbusters," which features your band busting brick-based specters with many nods and winks to the original music video and movie.

Another addition is the expanded entourage system. In Rock Band 2 you could set a member of staff such as an accountant or publicist who essentially acted as a bonus multiplier for fans or money. However, they were static menu options and only one could be active at any given time. In Lego Rock Band, ten staff — on top of your three road crew members and manager — can be hired, offering accumulative multipliers as well as being part of the structure of the story progression. More interesting though that every one of your entourage as well as your band can now be customized and will appear as you create them in the Rock Den and the real-time cut scenes.

Other tweaks include an option to remove the use of the bass pedal in songs on the drums and a new Super Easy mode similar to Guitar Hero's beginner mode. You also can't fail out of songs for a bad performance any more, simply losing some in-game currency; which can be immediately won back if you accurately hit the following set of notes. These are all welcome additions allowing for more accessibility for newcomers, though even the most hardcore Rock Band players should be thankful that the frustrating fail and restart paradigm has gone.

Red shoes, play blues: older decades aren't underrepresented, thanks to the likes of David Bowie and others.Online modes and features found in previous Rock Band games other than the music store are conspicuously absent from Lego Rock Band, which I suspect is mainly to protect any younger players from interacting with potentially inappropriate strangers. While this could be a breaking point for a small minority, I think for the vast majority won't miss it, given that the co-op Rock Band experience is endemic to being in the same room as your band mates. It's like if members of a real band conducted a performance over Skype — it's just not done.

Regardless of features, modes and presentation, rhythm games live and die by their setlists. While it ultimately comes down to a matter of opinion, in trying to keep with its E10+ rating, Lego Rock Band ironically provides less balance and variety than its predecessors. While you have some classic tracks that have long been requested by fans like "The Final Countdown" and two tracks by Queen, you've also got a few that will probably only appeal to youngsters and commercial radio listeners such as "Real Wild Child" and "Walking on Sunshine." Harder-edge genres like metal and grunge are completely absent, as well as being inaccessible from its version of the download store and any previously purchased DLC you may have. Classic rock is also strangely absent, usually having been a staple in most rock-based rhythm games, though older decades aren't underrepresented, thanks to the likes of David Bowie, Bon Jovi, and Steven Harley & Cockney Rebel.

So if the setlist is to your taste, this is pretty much a must-buy for Rock Band fans. With the injection of universal appeal that is Lego, and some meaningful additions to the series — and rhythm games in general — Lego Rock Band justifies its status as more than just a glorified and re-skinned track pack. Even when you get done with the main game, the forty-five tracks can be exported to your library for use in the other versions of Rock Band (save for Beatles) for a small micro-transaction. I think for most it will be a pretty good stopgap until Rock Band 3.