King's Quest II: Romancing the Throne on Game and Player 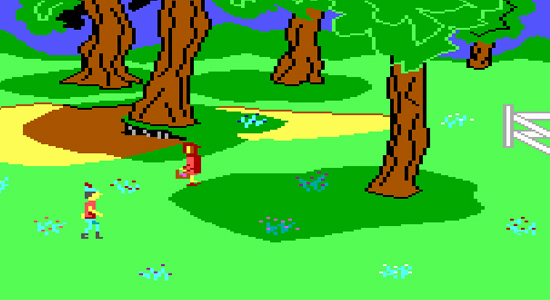 Well worth your nostalgia.

o one over the age of twenty-five should be lured by nostalgia, right? We learn, through a series of experiential whacks, that by definition the state of mind is delusive. The places and times we want to revisit are lost — most of them. Those few within reach so closely match the memory, they warrant the yearning, and on we yearn.

On Christmas Morning 1986, my father included, with the family's new Tandy 1000, a copy of Sierra On-Line's King's Quest II: Romancing the Throne. My last earnest play of the ostensible "3D Adventure Game" had to have been at least fifteen years ago. No matter: in 16-color, 200-by-160-pixel fidelity accompanied by three sine wave channels and a white noise generator, King's Quest II remains, impossibly, every bit as enchanting and transportive as it was to the eight-year-old and his sister.

Depicted in graphics that are not at all crude, Kolyma charms as it once did.

Try to imagine the world sans fire and wheel: this was the PC adventure gaming market to which Ken and Roberta Williams introduced King's Quest: Quest for the Crown in 1984. Genre entries resembled the Williams' first effort, Mystery House — text-burdened, monochromatic. The charge of knight Sir Graham, to earn the crown of Daventry's heirless, dying king — colorfully illustrated with a navigable fantasy landscape and lively sprite animations — made for King's Quest's own royal accession and progeny, to the tune of several hundred thousand sold copies and an anticipated sequel.

King's Quest II bears all the marks of the Williams touch, a medley of popular fairy tales guiding players through an original story. King Graham, bachelor monarch, turns itinerant suitor when his magic mirror divines a young woman imprisoned atop an ivory tower. The nameless land can only be reached through three magic doors at the mountainous edge of the country Kolyma. Settled. Donning his adventurer's cap, Graham sets out. As players solve text-input puzzles, he plumbs oceans, traverses forests, bridges chasms, vaults cliffs — and braves a larcenous dwarf, flesh-eating witch, a count with long canines, maddened enchanter, and a wolf cleverly supplanting dear, old Grandma.

King Graham plumbs oceans, traverses forests, bridges chasms, vaults cliffs.The graphics surprise me. In each one of several dozen discrete game-world panels, they're rudimentary but not at all crude. Authoritative lines, effective figure-ground reversal, and confidently irregular silhouettes of trees and rocks and earthworks lead me to suspect the use of photographs. The palette, too, works well: who knew how veritably Brown #AA5500 could depict soil, bark, carpentry, and sand in shadow? Even in spite of Sierra's loving anachronisms — Grandma's California ranch with mailbox, magic doors compliant to interior building regulations, an antique shop transplanted from rural Oregon — Kolyma charms as it once did.

Want to win? Learn to type: all actions require typed commands, some more demanding of the correct verb and object. Later in the series, a text input dialog would pause the game; not so in the King's Quest II I played, nor the abandonware copy available over the internet. It isn't "drive stake into vampire's heart," but "kill Dracula," and you learn this as the vampire is awakening two feet from Graham. The entire quest can be completed in a few hours, with most success to be had through common sense — although familiarity gave me unhelpful premonitions, and at first I tried to complete objectives out of order. Arcade sequences, consisting mainly of negotiating staircases, aren't easy, requiring an older, stricter prestidigitation.

Arcade sequences aren't easy, requiring an older, stricter prestidigitation.Friends of mine and my sister's owned King's Quest titles over the years, and with one exception, each played on a computer which consolidated Sierra's music and sound effects into uniphonous, droning bleeps. The Tandy 1000 series, like IBM's PC Junior, could perform simple orchestrations long before Creative Labs fused gaming and MIDI with the Ad-Lib. An emulation program allows me to hear King's Quest II's rendition of Greensleeves, the sound of crashing ocean waves, an irrepressible genie's entrance, the wail of ghosts, the warble of a nightingale, and JS Bach's unintended leitmotif for the most famous of the living dead.

Can I chalk up my high regard to a child's lingering impression? The musical shorts could be mistaken, I admit, for any old vestiges from the 8-bit age. And I know that way back in 1995, King's Quest III's decade-old graphics were deemed inscrutable by none other than fellow editor Ed Kirchgessner. But the immersion of other games has faded with time; not so, I've discovered, with King's Quest II; so my enjoyment is either the product of indelible projection, or proof of enduring appeal. To think that the second chapter of an epochal series came from a development team of eleven, the size of a division of a division we might see today: my kudos to Ken, Roberta, Chris, Scott, Sol, Jeff, Dale, Emo, Doug, Mark, and Al.

If there is one thing I love to read, it is about the games that people loved when they were growing up. And I am such a sucker for nostalgia.

I would like to think that our lingering impressions of older games comes from some intuitive understanding that they were of great quality, even if we couldn't explain why at the time.

even if we couldn't explain why at the time.

This is interesting, especially given that one of the other four games my father bought with the Tandy, Starflight, is considered a classic. Maybe Dad just has great taste?

What a game! This entry always struck me as the "odd" King's Quest (I didn't play VII or "VIII"), but I don't know exactly why. I think the colors of Kolyma struck me as alien, somehow, after playing the first KQ on an amber screen.

Among the memories stamped indelibly on my brain from this game include the terrifically foreboding poisoned lake, the pink ocean, the lion at the top of the tower, and the batmobile easter egg. Thanks for bringing it all back, Mike. Articles like this make me want to play computer games again.