Hyperballoid HD on Game and Player 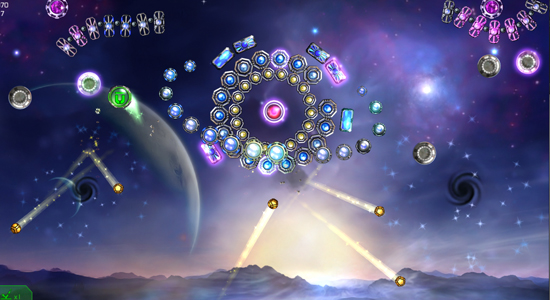 In the high tradition of Breakout.

These are just a few of the many guises the game Breakout has gone under since its inception. Originally created by Atari as an arcade game in the late 1970s, players took control of a Pong-style paddle at the bottom of the screen with the aim of keeping a bouncing ball in the field of play as it destroys all of the blocks on each level. This basic method of play has been replicated and re-released by a myriad of publishers on a myriad of systems ever since.

Now it comes to the PlayStation Network Store courtesy of Alawar Games in the form of Hyperballoid HD. Based heavily on PC title Hyperballoid 2, there are only a few minor additions to the classic Breakout game play here. Harking back to the more action-based variants like Arkanoid, there are a host of power-ups to be found inside certain blocks that can do anything from upgrading your paddle with destructive cannons and extra width, to multiplying the number of balls on the field.

Can't ignore Newton: more physics in play than you might expect.

Seemingly drawing inspiration from Peggle, there are also more physics in play than you might expect, with sections of blocks that rotate and move around, often onto and off the screen itself.

There are one hundred levels in the game, split across the two themed worlds based on history and space. Gameplay doesn't differ across either of these two spheres though level designs are sometimes derived from them, such as the Trojan horse and star-shaped stages. Given the sheer amount of these often complex areas, you can expect at least ten hours of entertainment out of Hyperballoid, although there isn't much incentive for replayability once you've finished. Perhaps some sort of multiplayer or co-operative play would have helped in this department as well as providing a bit more divergence from the well-worn Breakout formula.

Hyperballoid has a clear focus on casual play, as I found the game really easy and forgiving. Your default paddle is huge even without the extension power-up, so it's rare that you'll ever fail to prevent the ball from falling off the bottom of the screen. If you do run out of lives over the course of a few levels, you can immediately jump back into the last stage fully restocked with continues. Combined with your slow-moving ball that rarely seems to change speeds, the game ultimately has a very gentle level of challenge for the majority of the campaign.

A big plus for Hyperballoid is its price tag. Retailing for just £3.19 (approximately $5) on the PlayStation Network Store, this is half the price of other recent indie releases such as Pixel Junk Shooter which sells for £6.29 (approximately $10).

Hyperballoid HD is currently only available for download in the UK and Europe, but Alawar plan on a North American release very soon. If you have an particular affinity for Breakout-style games and have a few spare pounds, Euros or dollars on hand, it might be worth a look.