Sam & Max: Beyond Time and Space on Game and Player 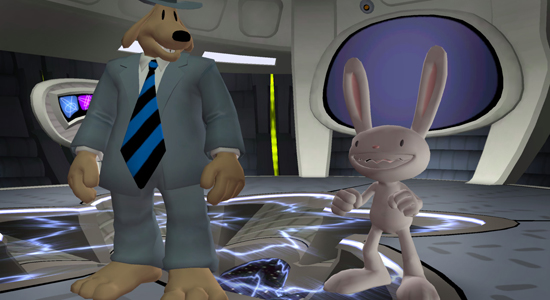 Sam & Max: Beyond Time and Space

am and Max have been attracting a small but dedicated group of followers ever since their first foray into the video game world, 1993's Sam & Max Hit The Road. Since then, the formula hasn't changed much: Sam is the deadpan and slightly homicidal dog in a suit, while Max is the deranged and extremely homicidal bunny sidekick. Together they solve crimes that the normal, non-anthropomorphized authorities just can't handle, all the while driving dangerously in a big black car, pulling out extremely large handguns at inappropriate times, and making quips about anything and everything. The humor runs the gamut from dark to topical, but mostly stays in realm of pop culture references and kooky puns that the franchise has become known for. It's funny, most of the time.

Capers that the duo finds itself wrapped up in are as ridiculous and funny as ever.

Sam & Max: Beyond Time and Space follows a similar structure to the pair's last outing, Sam & Max Save the World. The game is divided into six "episodes," each one a small, self-contained story. Across all six episodes, a larger tale is told. This time around, Sam and Max have to deal with everything from a robot in the midst of an existential robot to Satan himself. Along the way they find themselves at the North Pole, Easter Island, the Bermuda Triangle, outer space, and of course, Hell. The capers that the duo finds itself wrapped up in are as ridiculous and funny as ever, and the solutions to the ever-present puzzles that make up the Sam and Max experience will surely make you laugh. They'll also make you want to put a controller through your television at times, but it wouldn't be an adventure puzzle game without that feeling, would it?

However, it's been almost 17 years since the first iteration in the Sam and Max franchise. In some regards, the formula needs to change. Sam & Max: Beyond Time and Space still retains the characteristic dark and zany humor of the series, but it's marred by a crippling control scheme and engine that make simple tasks like walking across the room practically unbearable. The writing is clever, punchy, and humorous, and the voice acting is spot on, enthusiastic, and energetic, but the game itself feels like it's running at quarter speed. It's hard to appreciate the game's redeeming qualities, like the humor and the characters, when navigating through the world is so extremely cumbersome.

Like so many PC games that are ported to consoles, Beyond Time and Space attempts to recreate the action of moving a cursor with a mouse, but fails miserably. Playing through this game instantly reminded me of StarCraft 64 for the Nintendo 64, and how awful it was attempting to control dozens of tiny little units in a high-pressure RTS environment using the Nintendo 64 controller. Sam & Max games are anything but high pressure; the whole idea of the game is to stroll around and take in everything, because everything is funny. Yet the process of interacting with objects is excruciating. The game does offer a scroll speed toggle to increase the dexterity of your cursor, but even this isn't enough. Even if you do manage to click on an object, you're going to have time to get a sandwich before Sam or Max get to it.

North Pole, Easter Island, the Bermuda Triangle, outer space, and of course, Hell.I'm sympathetic to the argument that the classic point-and-click interface is integral to the authentic experience, and the adventure puzzle game genre as a whole, but playing through Beyond Time and Space doesn't feel retro or nostalgic so much as it feels unintuitive and flawed. It doesn't feel like the designers are committed to upholding a specific aesthetic, style, or pacing with the controls, or even like the controls were intended to be the way they are for any particular reason; it just feels crappy, like they tried something and messed up. It's almost 2010. Today's consoles and controllers, coupled with the human body, are capable of amazing feats of dexterity and accuracy. There's no reason to have gameplay that feels decades old. It's hard for me to imagine that no one at Telltale Games spoke up and said, "Hey guys, this feels awful. I'm really having a hard time playing this game. Can we improve the controls?"

Designing controls around the specifications and limitations of a given platform is an important part of crafting a game. I remember when I picked up Final Fantasy XI for the PC on the day it was released, I found menu navigation to be infuriating; that's because the game was ported over from the PS2, where menus were designed to be navigated with the PlayStation controller, and Sony neglected to change that when it came to the PC version. I soon became jealous of my friends who were playing FFXI on a PS2, and similarly, I imagine that playing through Beyond Time and Space on a PC would be a much more pleasurable experience. There's a lot of fun to be had with Sam & Max games. Humor is something that's often attempted but rarely done well in the realm of video games, and for the most part Sam & Max games get it right. This latest offering is no exception. But if you want my recommendation, buy it on Windows. Don't buy it on a console.

Good review. Shame the controls are so broken on console, especially when it sounds like the post-Sam and Max Telltale games all had controller-friendly options.

One question though, does Sam not run when you double click places as in the PC version of Season Two?

Sam & Max: Beyond Time and Space