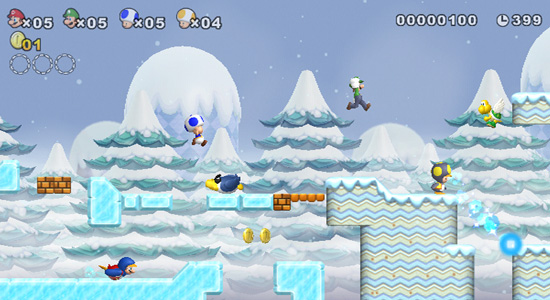 To enjoy this classic, grab a friend (or three).

et's take a ride in our time machines: the year was 1986, and my good grade school buddy Brendan and his brothers had just received an NES. "Look at those graphics," we exclaimed. I don't think any of us even knew what graphics were at the time, but there was one thing we knew for certain: Super Mario Bros. was something special. I absolutely sucked at the game (never making it past world 1-1), but I was happy enough just watching those guys cruise through level after level of gaming bliss. Fast forward to 2009 — New Super Mario Bros. Wii launches for Nintendo's newest platform, and the old classic is fresh all over again.

Like New Super Mario Bros. before it on the DS, this Wii remake is just that — a graphically souped-up rehash of the greatest 2D Mario moments. Of course, there's one huge addition this time around: simultaneous multiplayer. Enough can't be said about how much this cooperation/competition adds to the overall experience. Despite the chaos that ensues as each additional player hops into the fray (the game supports up to four), the game actually becomes easier in other ways as players are able to spot one another and cooperate to reach new heights and challenges. Indeed — while NSMB Wii can be enjoyed solo, it's clear that the experience was meant to be shared with a friend (or three).

In terms of presentation, NSMB Wii is a pure delight. Graphics are crisp and clean (despite the Wii's standard-definition limitations) and the game's soundtrack is a fun reexamination of traditional Mario tunes. All the old favorites are present and accounted for: foreboding melodies for Mario's spelunking excursions; fantastical tones during the undersea levels; this title's score is chock full of traditional series flavor. The game's overworld map is reminiscent of Super Mario Bros. 3 and Super Mario World — while each "world" in the game exists as its own separate hub, levels within those worlds are navigated by venturing from point-to-point on the map. Players will explore haunted houses, castles, icy peaks and fiery infernos, as well as a few locales that are entirely unique to this game.

Here, motion controls manipulate the angle of a cantilevered platform.Some people have expressed concerns about the game's control scheme, but let me reassure you right now: you have nothing to worry about. Cast those nunchucks, Wavebirds and Classic Controller add-ons aside: all you'll be needing to play NSMB Wii is one or more WiiMotes. The WiiMote's ‘1' and ‘2' buttons control jump and dash commands, and the d-pad handles everything else. Cramp-inducing motion controls have been kept to a minimum, and on-screen cues will indicate when you actually need to give your controller a shake. Overall, the game's controls are simple, refined and precise: as with past Mario games, failures will be the result of user error rather than shoddy platforming mechanics.

Mario games have always been challenging, and NSMB Wii is no exception. I've grown slightly more competent at 2D platformers over the years, but I'd imagine that some younger players will quickly become frustrated by NSMB Wii's unforgiving nature. Of course, the game isn't cheap, just hard. Charming visuals and characters will keep players coming back for more despite frequent drubbings at the hands of Koopa Troopas, Goombas, Bullet Bills and Bowser Jr. Somehow, failure is handled more easily than usual — if playing with a friend, you'll have someone to laugh about it with. If you do happen to reach the end of your rope, the game's convenient quick save feature will make it easier than ever to step away for a breather.

Defying logic, New Super Mario Bros. Wii successfully reworks a formula that's more than two decades old, the end result being one of the most fun multiplayer experiences to come along in years. While some may say that Nintendo wasted an opportunity by not including internet multiplayer or a wider assortment of play modes, I'd argue that they're missing the point. NSMB Wii works so well because it's simple and it gracefully capitalizes on what we've known all along: it's fun to play with friends.