Call of Duty: Modern Warfare 2 on Game and Player 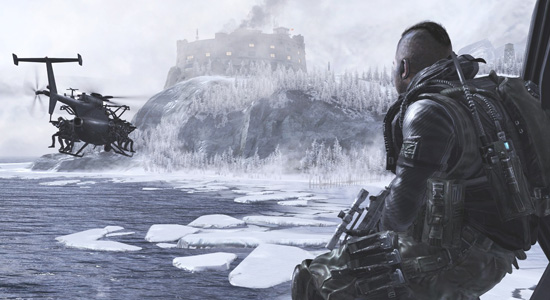 Triumph and tripe in one convenient package.

t's no wonder that the tactical shooter is a rare breed on consoles — step into the average Xbox Live game lobby and you'll quickly get the sense that subtlety has no place there. This isn't to say that a few developers haven't succeeded at spoonfeeding a tactical experience to console players: GRAW, Gears of War and Call of Duty each garnered a unique audience, capitalizing on visceral thrills and giving a true alternative to run-and-gun gameplay. In fact, Call of Duty: Modern Warfare 2, the latest from Infinity Ward, very well may have earned the title of "most anticipated game of all time," guaranteeing the developer its very own wing in the house that Bungie built. Constructed on the surprisingly solid foundation of its 2007 predecessor, Modern Warfare 2 provides what is quite simply the best multiplayer experience on consoles. As for the game's campaign mode: umm, yeah. We'll get to that.

The Call of Duty franchise has always focused on the multiplayer side of things, and Modern Warfare 2 is no different. With so much done right in Infinity Ward's last game, effort could be placed on fine tuning this time around: the graphics are more lush; the levels more intricate; the game's arsenal more diverse; the user interface more informative than ever before. Everything about Modern Warfare 2 aims to make the game more accessible while retaining the depth that's kept fans coming back for the last two years. Modern Warfare's "create a class" features return with a new focus on balance. Gone are potentially game-breaking perks (the power-ups which give your avatar extra abilities on the battlefield) like "juggernaut," and those which have returned for the sequel have been revamped or expanded upon. The game's stable of secondary weapons has also been refined: while pistols remain the jack-of-all-trades backup weapon, sidearms like machine pistols and shotguns can also be equipped in any player's secondary weapon slot — finally, snipers won't feel so naked in short-range encounters. In general, Modern Warfare 2's arsenal feels a bit more worldly and, well, modern. The M-16 has been replaced with the French FAMAS, and an accurate portrayal of the AUG weapon system outfitted in both the carbine and LMG configurations proves that Infinity Ward did their homework as they strove to diversify the game's firearms.

A wide variety of competitive multiplayer modes return in Modern Warfare 2: whether you're hankering for straight up death match or a more tactical objective-based game, consider yourself covered. New to the franchise are a handful of third person game types that I can only imagine exist to placate (and sway) fans of games like SOCOM and Gears of War. As much as a game's camera can affect the nature of its play, expect a drastically different experience (and caliber of player) when entering these lobbies. Matchmaking remains relatively unchanged this time around — while no skill-based matchmaking exists, great strides have been made by Infinity Ward to see that you're able to get into a match quickly. In an odd move, support for Xbox Live party chat has been removed from a number of Modern Warfare 2's more popular gametypes. I'm uncertain whether this was the result of bandwidth constraints or an attempt to limit death cam "cheating." While I respect any move made to enhance overall game quality, I'd hope that party chat wasn't removed as a nod to the "hardcore" — if you're after that competitive an experience, why on Earth are you playing on Xbox Live? As for myself, I play multiplayer to have a good time with friends. As it stands, Infinity Ward has made this a bit more difficult. In short: be prepared to spam mute a lobby full of racists, twelve-year-olds and wannabe hip-hop stars. Consider it the price of admission to the best multiplayer shooter in town.

Cooperative multiplayer makes its series debut — while Infinity Ward cited technical difficulties as their reasoning for not including a cooperative campaign mode, the "Special Ops" mode we have in its stead is a worthy substitute. Featuring a gauntlet of unlockable missions that can be completed solo or with a friend, these arcade challenges could keep tenacious players occupied for months on end. While some missions place you both on the same battlefield, the more ambitious ones feature parallel play experiences — an infantryman gets cover from his assistant in an AC-130, for instance. All told, great fun, and a big step forward for the franchise.

Exciting? Yes, but not every ten seconds.With so much done right in Modern Warfare 2's various multiplayer modes, it's a wonder that the game's single player campaign is so unrewarding. I liken it to a rollercoaster that consists of a single, monstrous hill — the descent is thrilling for the first five seconds or so, but after a while, it becomes a bit of a bore. How many times must players be asked to mindlessly advance through wave after wave of bland, faceless enemies? For a tactical shooter, Modern Warfare 2's campaign requires practically no tactics whatsoever, but instead a mindless drive to press on through these encounters. Even at normal difficulty, the campaign is a chore, requiring frequent replays and rewarding smart play decisions with death. The game's story is of no help whatsoever, bordering on the surreal and absurd. I still find it baffling that in a world full of conflict, complex political relationships and daily acts of heroism, developers seem unable to part with outdated storytelling conventions. What's more offensive? Realistically addressing the conflicts of the day, or recasting them as simple black-and-white stories featuring maniacal villains and damsels in distress? I exaggerate, of course, but today's battles lack grand showdowns and simple relationships. The decentralization of the world's terrorist networks prevent an easy victory, yet somehow, the finales of video games continue to feature a madman with a rocket launcher atop a cathedral's bell tower. Modern Warfare 2's campaign mode should be viewed as a challenge to developers: it represents everything that is backwards and outdated within the gaming medium.

So is Modern Warfare 2 worth your time? Put it this way: if you have an internet connection and at least one friend with whom to play online, you should stop reading right now and run to your nearest retailer. The game's multiplayer component is nearly flawless, and deserves all the praise it's been garnering. The game's campaign, however, is another story, and a cloud that hangs heavily over the rest of the package. Gone are the days when virtual shooting galleries were deemed entertaining, and neither the campaign's narrative nor technical merits do its source material any justice. Infinity Ward needs to realize that they're producing for a fast-evolving medium: while they continue to produce outstanding multiplayer games, their single-player content doesn't just disappoint: it insults.

But I hear they got rid of the non-stop enemy gauntlets from COD4's single-player campaign. That's got to be worth something, no?

From my play-through, most of the problems remain, Alexandr. The CoD games have always relied on a strange combination of scripted events and fixed enemy positions -- as such, the enemies you meticulously clear out of a fortification may simply respawn if you don't push forward. While this somehow worked for me in CoD 2, I've found it to be a real pain in subsequent games. Remember the frustration you felt during that urban rescue mission in CoD4? Well, expect to experience more of the same here.

Since few folks actually purchase the CoD games for their single-player campaigns, this isn't much of a problem. Still, I look forward to the day that Infinity Ward implements a different model to better support their game's "tactical" nature. I never felt this frustration while playing the original Halo, and that game's nearly ten years old.

The finales of video games continue to feature a madman with a rocket launcher atop a cathedral's bell tower.

Immortal, for all the wrong reasons!

The sequel only underscores the dichotomy between features. Whereas COD4's single-player adventure held my interest through the tactical nuke, I have zero desire to play the campaign this time around — meanwhile, multiplayer reveals the most balance and provides the most fun I've had since Halo 2.

The M16 actually was not replaced by the FAMAS, the M16 is still there just more balanced and not available from the start.

Not being able to use party chat isn't a huge problem for me. They allow it in a few playlists and muting is extremely easy so you are only talking to who you want and it allows the game to be played as intended in playlists such as search and destroy.

I am liking some little things with this one such as an attachment being modified on a specific gun to provide the correct sight for the gun (F2000, TAR, L86 etc.)