Way of the Samurai 3 on Game and Player 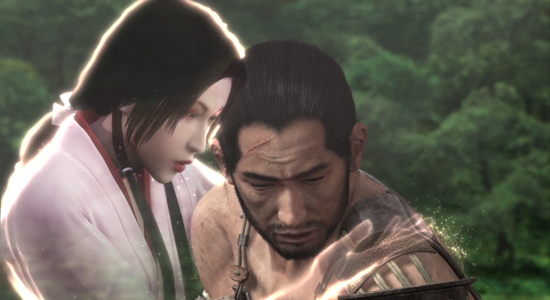 Way of the Samurai 3

Hire some hungry samurai" is what the farmers of a nameless village did in Akira Kurosawa's 1954 film Seven Samurai. Several men who took the offer, men from the class villagers feared and contemned, agreed to face death for something more than a share of the harvest.

The Japanese have poignant ways of illustrating the parlous Sengoku period, even in video games: I remember the checkerboard of fiefdoms across Honshu in Koei's Nobunaga's Ambition; and saw the shared desperation of common, noble, and Bushido, as in Kurosawa's classic, when I played Acquire's Way of the Samurai 3.

Players choose a character whose entrance comes halfway through Japan's feudal era, trudging through the site of a battle that took the life of the samurai's master and consummated a vassal's bid for power. Right from the start, Acquire's trademarked decision-making system engages: the samurai can strain to answer two peasants startled by a living man; or he can draw his sword, run the scavengers off, and truly begin alone.

Colors and depth-of-field effects, with music to match, enrapture.

Way of the Samurai 3 amalgamates the open-ended Western RPG with its cutscene-heavy Japanese counterpart, as well as influences from fighting games and classic text adventures. The apocryphal fief of Amana contains seven locations — a village, a town, two castles, two roads, the battle site, and a guarded gate leading out into the country. In each location are NPCs who — by offering conversations, dialogue cutscenes, jobs, services, or alliances — help the samurai advance along whichever path the player chooses, be it honor, greed, bravery, or apathy.

Although most citizens of Amana are incidental, exchanges with central characters and passerby alike are more varied and more piquant than regnant titles Oblivion and Mass Effect. There is the de facto village leader, the unwilling serf Murechika, who tells the samurai to "get rid of those bloodstained weapons"; and then the man passing through, who grimly notes that corpses on the road "nowadays are a common sight." Acquire's sharp scriptwriting braces a suspension of disbelief often stressed by repetition or inanity.

But jobs, while the most direct means to build wealth, are insipid. Relay a message, find some beloved briefs wrapped in cloth, chase down a burglar and apply some corporal punishment; little else. They contribute nothing to the game's otherwise deep atmospherics while tending to waste a player's time. Further, the game's day-night cycle — with colors and depth-of-field effects that enrapture, music to match — provides poor visibility after dark, complicating jobs that can only be carried out then.

NPCs help the samurai advance along whichever path the player chooses.Another inconvenience is saving progress in Way of the Samurai 3 — only possible by chatting up a demented, old minstrel and occasionally humoring him. The biwa player entertains, yes, but the day passes, one minute for every second, as he rambles. That deaths occur abruptly, even by way of a mini-game, multiplies the frustration from this JRPG convention.

A select few NPCs may be convinced or cajoled into joining the samurai. Their usefulness falls somewhere between Fallout 3's Dogmeat and Fable 2's henchmen; but nowhere near the camaraderie or vitality of Half-Life 2's Alyx Vance. For curiosity only.

Swordplay and blacksmithing should keep players' attention, and act as incentive to replay a game designed to encourage and reward successive adventures. A minimum of required buttons for slashes and gambits accommodates gamers of average skill, and myriad techniques allow experienced duelists to attain mastery of eleven fighting stances. Katanas and spears may be constructed and tempered for the most exquisite lethality.

Playthroughs are short. Before long the samurai will meet his fate and have a score of actions and feats tallied, and then a player may restart the game and return to that battlefield — not only with a new option or two for character customization but, in a kind of reincarnation, all the belongings and abilities of the preceding samurai. Inasmuch as plentiful yen ease the pursuit of new trophies and destinies, aggrandizing or humbling, players who take to the promise of fortune in Way of the Samurai 3 will gladly try again.

Please excuse my somewhat childish outburst but...
you win points for this review.
I really enjoyed the first two games and have been eagerly awaiting number 3 for some time. However very few sites seem to have any interest or information regarding it and so finding that it's out in the US gives me hope that I shall soon be playing it here in England.

As I wrote, the developers' care — regard — for supporting characters is impressive. Too many games' NPCs repeat one-liners; these NPCs seem to have their own thoughts, concerns, and dreams.

Way of the Samurai 3