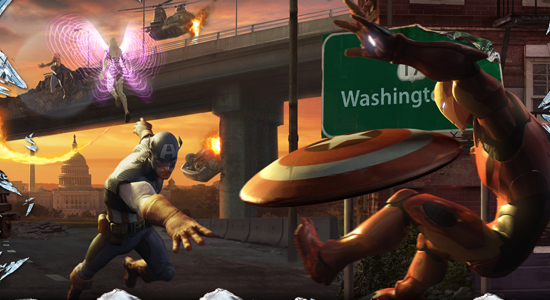 Quite substantial for a beat-'em-up.

n 2006, the original Marvel Ultimate Alliance proved to be a sleeper-hit, bringing together an army of Marvel Comics' stars in a chaotic action RPG for up to four players. Building on the success of its predecessor, this year's Marvel Ultimate Alliance 2 endeavors to be bigger and better, adding even more characters and a devastating new attack system, and adapting a popular story arc from the comics.

At its core, MUA2 is still a team brawler with light RPG elements reminiscent of the latter Gauntlet games. Every playable character has two basic attacks that can be chained together for some basic combos, as well as the ability to pick up and throw objects and enemies in the Havok physics-powered environments. Supplementing these are four hero-specific moves that are gradually unlocked as you level up. Such a large array of attacks keeps this brawl-fest feeling fresh after many hours, and is pretty impressive considering each of the twenty four playable characters have their own unique move sets.

A large array of attacks keeps this brawl-fest feeling fresh after many hours.

While the combat basics are largely unchanged from the first Ultimate Alliance, the game introduces a new team-based ability called the Fusion system. Combining the powers of two separate heroes, players can unleash powerful screen-clearing attacks. This is probably the biggest improvement over MUA since it not only encourages more teamwork between players but also adds a bit more flavor to a game that centers primarily on the repetitive task of beating up hundreds of enemies.

The second part of the Ultimate Alliance formula, the RPG system, makes a return though it plays a smaller part this time around. While your characters still increase in level and improve their abilities over time, there is no longer gear to equip. This is instead replaced by a medal-based equipment system that provides the equivalent bonuses to your whole party. While some people might complain this decreases the depth of the game, it helps streamline the proceedings by lessening the need to keep pausing the game and muddling through menus. In addition to an auto-spend feature for ability points and experience, this essentially opens up the option for the game to be played as a pure brawler if you should wish to.

Developers Vicarious Visions emphasized that the game's story is based on the Civil War arc from the comics, where a government-enforced superhero registration act drives a wedge between the Marvel elite. In truth, only chapters two and three have you taking part in those events, whereas the rest are based on the Secret Wars arc and an entirely original story. These three previously unrelated plots are tied together surprisingly well and serve to familiarize comic newcomers to two key Marvel events; as well providing something new for veterans to enjoy.

Yes, there is a reason for the fracas: three previously unrelated plots are tied together surprisingly well.To accommodate this more serious shift away from the classic fan-service feel of the first game, MUA2 introduces a more realistic, grittier aesthetic. Both styles and stories are great in their own ways so it's really down to the player to decide whether you prefer this approach or the campier, light-hearted tone of the original Ultimate Alliance.

The campaign clocks in a little bit shorter than the first game, but with the choice of anti- and pro-registration story paths it's definitely worth a second playthrough. The difference in tracks don't compare to, say, the good and evil sides in Mass Effect, though it does effect the roster of playable characters and your actions in chapters two and three, so if you want to see everything and try out every hero you'll probably feel compelled to replay the story from the other team. On top of that there are side-quests, a Marvel trivia game, as well as a heap of collectibles to find which all give you bonus EXP and medals. Taking all that content into account, it's safe to say the MUA2 is quite substantial for a beat-'em-up.

It's worth mentioning that most early reviews of the game noted a high prevalence of technical problems, though thankfully a launch-day patch seems to have fixed a lot of the bugs. After over ten hours of play I have only experienced a couple of minor glitches and one game crash that resulted in the lose of five minutes of gameplay. While it's still not perfect, it's no longer a big enough issue to warrant prospective buyers having a change of heart.

In a world where multiplayer games seem to be dominated by brown-looking online shooters, it's refreshing when a good single-screen co-operative title lands on a console other than the Nintendo Wii. While it may not be a revolutionary leap from the first game, if you're in the market for a satisfying comic book romp, preferably with some friends on board, then Marvel Ultimate Alliance 2 might just be for you.

Sounds pretty sweet. I added this one to my game queue through Game Access. Should be a fun one.

I am glad you like it :)
This game was highly fun to work on even if it were only for a week. I am glad to see it out and people really enjoying it.

I didn't care much for the first MUA game, I like the use of the Civil War and Secret Invasion story arcs, even though I haven't read any Secret Invasion.

It's a shame that there isn't more Civil War going on here.

Ugh, what's up with those awful comma splices above. :P