Borderlands on Game and Player 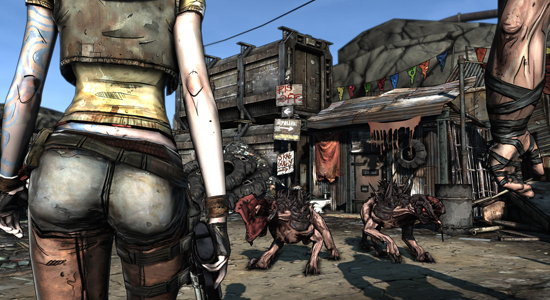 Much more than just a four-player Fallout.

any games that try to create a blend of shooter and RPG usually end up feeling a little bit off in regards to the action. As much as I love Crackdown and Mass Effect, their movement and combat were just unwieldy and unpolished enough that they would often lead to frustration. Thankfully, Borderlands avoids this with tighter controls and oh-so-satisfying gunplay rivaling that of some the best dedicated first person shooters.

Like the gameplay, the RPG side isn't entirely original but is executed in an equally impressive manner. Having been compared to Diablo, the game uses the archetypal character classes, talent trees, quests and, most importantly, piles of material goods to be plundered. Well-balanced experience and loot drop curves expertly fuel the addiction with the next level-up or major item haul never too far away.

The game's story is paper-thin but it's enough to take you on a journey across the Mad Max-inspired world of Pandora. At first I was a little worried that this post-apocalyptic setting would get a little monotonous, but the game pushes the scenario to its limits showcasing some impressive creativity and level design. Expect to find you and your friends exploring underground excavation sites, winding military facilities, eerie crystal caves and even snow-covered tundra.

While the developers have touted that there are a "bazillion" unique guns to be found in the game, that's not exactly true. As people have pointed out since its release, Borderlands uses a procedurally generating system, meaning that there is in fact a shortlist of guns though each have a likelihood of appearing with randomly defined attributes and abilities. At times there seem to be way too many useless ones appearing especially later in the game, but comparing them to your current load out is a cinch thanks to a handy pop-up window above every item dropped. That's if you aren't squabbling with your friends about who gets to keep them.

Speaking of which, the co-operative multiplayer is one of the game's main selling points, though I've happily played most of my first playthrough solo. Hosting a game online means other players come into your version of Pandora, sharing your quest log and world progression. If others have finished certain quests that you haven't they can't take them and claim the rewards again, but they still come away with any experience and loot achieved along the way. Anything you earn and accomplish with others will be carried back into your solo game and vice versa, providing a seamless crossover between the single and multiplayer aspects. That may not sound like much of an achievement at first, but considering that other high profile games such as Fable 2 and Marvel Ultimate Alliance 2 fail to include such a robust system, it's all the more impressive here.

It's a small post-apocalyptic world after all: impressive creativity and level design.Playing with others provides a much more tactical element, especially if you've got a team with a balance of classes. The difficulty and enemy counts ramps up depending on how many players are with you, so it doesn't suddenly became a walk in the park. You do, however, have to contend with dividing up the spoils. Money and experience is automatically split between the players, but weapons, equipment, and ammo aren't. As with any loot-based multiplayer game, it's best to roll with people you know who aren't likely to hog all the item drops without a thought for anyone else.

On top of the bazillion guns, the game is a pretty substantial experience. A single playthrough completing the bare minimum of side quests will clock in at about twenty hours, but that would leave you about quite far from the level cap and with whole areas of the world relatively untouched. With the option to jump into your friends' worlds and four interesting characters classes to play as, you'll probably find yourself spending a lot more time than that on Pandora.

As much as I gush about the game, there are a few things I'd like to see added in future patches or downloadable content. First of all, the ability to customize your character's appearance is probably the biggest thing missing from the game as it is. Adding in the feature would provide another layer of depth to character development and allow multiple players of the same class to differentiate themselves in multiplayer. Also, there isn't any sort of trade mechanic, so if you aren't playing with trustworthy friends you'll have to resort to the risky business of agreeing to both drop your items at the same time. There's also only one vehicle type in the game, a Warthog-type, two-person buggy which is limited to two instances per area. For such a huge, open-world multiplayer game this seems a little lacking, though perhaps I'm just spoiled by the likes of Halo 3 and Crackdown.

None of these nitpicks detract too much from a fantastic experience that can be enjoyed just as much solo as it can be with friends. Taking into consideration its addictiveness and the sheer volume of things to do in its world, Borderlands is easily one of the most substantial games to be released this holiday season.

The game's visual design reminds me of Jeff Laubenstein's illustrations for FASA properties: stylish yet gritty, and straight out of a graphic novel.

I've been wanting to try this game for a while. Your review along with many others have been very positive. It sounds like the game has a pretty decent amount of replay value. Hopefully I'll be able to pick this up soon.

I just acquired an smg last night that shoots two bullets for every one in my clip, it shoots five times faster than any I have found so far and it regenerates its own ammo. It also says "Hallelujah!" in the description.

I love this game.

I love the amount of weapons you can loot. I end up changing guns every few levels.

Later in the game there are soooo many guns around that it gets really hard to pick one over the other.

I think with SMGs I ended up preferring ones with lower power but with burst fire which ultimatley do more damage.