Section 8 on Game and Player 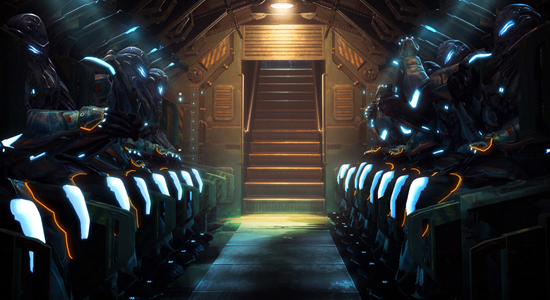 If anything, a lesson in restraint.

ci-fi shooters attract me, so after learning of Section 8's development by TimeGate Studios, I arranged to review the game when SouthPeak Interactive published it this month. If its title invokes the misfits of Gears of War's Delta Squad, Section 8 is misnamed, as immediately amusing as it is sedate — for a genre heralded by Marshall-stack palm-mutes, particularly dignified.

A short campaign follows player character Corde, a soldier quietly climbing in rank as he and his unit travel from planet to planet, serving vitally in the defeat of a frontier insurrection. Fully industrialized, combat demands one or another powered shell, from one-man suits to drivable mecha and tanks.

In the future, coolness remains a
factor: aesthetics shouldn't dismay.

Nothing should surprise a player, at first: one primary weapon, one secondary weapon, one toggle for grenades and a special tool, one heads-up display monitoring munitions counts and integrity of shields and armor. And in spite of visuals implicating lower budgets, Section 8's aesthetics shouldn't dismay. Technology and architecture are striking, the sound and feel of weaponry nicely crafted for heft.

Within minutes basic gameplay is pretty comprehensible. Wide-open environments are meant to be traveled at a 45-MPH sprint that engages after a slick, five-second sequence. Buildings and hangars lack operable doors, instead scalable through use of a jetpack. Enemies pursue aggressively, and shields deflect at long ranges but can be pierced point-blank. However maximized their forward speed may be, Corde and comrades aren't exactly nimble. On-foot evasion is difficult, turning firefights into races of attrition of shields and armor — not unlike "Battle Rifle duels" of Halo 2 and Halo 3 but, again, absent any useful sidestepping, without the same thrill.

Players may choose from several configurations — loadouts — insinuated during the plot but available at large in Section 8's multiplayer and quick-action mode. Weapons include standard fare, like a shotgun and sniper rifle, but special tools extend to repair units and ECM, sure to be used cleverly. As in Counter-Strike and more recently Shadowrun, accomplishments may be cashiered for in-game equipment and installations.

Most outstanding are ten points that may be distributed across a combat suit's various systems for advantages such as tougher armor, mitigated recoil, deadlier ammunition, personal cloaking and detection sensors. Both subtle and sharp differences appear in single-player and the free-form, bot-populated quick-action mode. Inexplicably, I can only surmise how dynamic multiplayer could be. After a dozen attempts in two evenings, I was unable to connect to a single online game with Xbox Live players. What did I do wrong? Has no one picked the title up? The obstacle to playing a large portion of the game baffles but, critically speaking, it can't be exculpated. 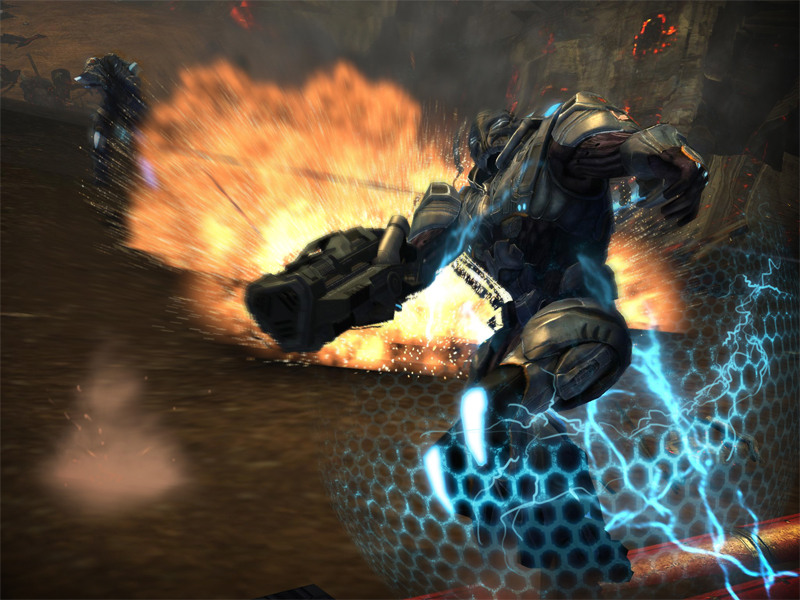 Shields won't repel everything.
You can prioritize something else.So we are left with what redeems Section 8: a lesson in restraint.

The allure of Halo: Combat Evolved, for example, emerged from a terse script for stock characters — taciturn hero, solemn captain, spunky genie, leatherneck sergeant, each part performed to the letter. The series' second game submitted alien clergy reciting sing-song scripture for fashion-conscious apes, while Halo 3 suffered from the possessed genie's leaden couplets ("I am your shield . . . I am your sword"). I cherish the series but do so with some selectivity. Not all space operas were destined.

Section 8 introduces neither a love interest nor any romantic tension — nor a single woman beyond the voice of the dispatch operator — and contains a single claim for vengeance, namely Corde's, for the dishonorable killing of a former commander. No internecine quarrels or complicated pasts, but rather straightfaced respect between soldiers. Orders are delivered, missions carried out; Corde and his squad are commended. Only a single, feral soliloquy of Corde's interjects. Simple, dry, the plot arguably bores — and yet because it, like gameplay, seeks to resolve only what it established in image and fact, almost documentarian, it piques one into wanting to know more. If only TimeGate and SouthPeak would let me.