IL-2 Sturmovik: Birds of Prey on Game and Player 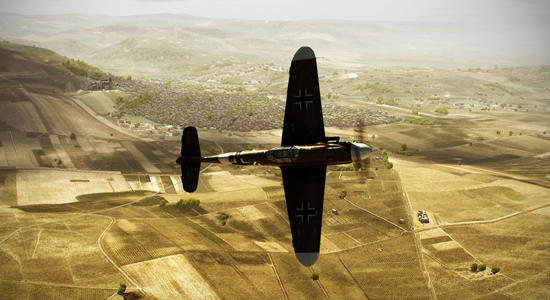 here's a reason why aspiring pilots have to attend flight school. Trim this, flap that: flying a plane is a lot more difficult than Ace Combat and Pilotwings would lead us to believe. For this reason (and countless others), true flight simulations seem to be exclusive to the PC — without a keyboard, managing radio frequencies, trim tabs and checkpoints would become an exercise in frustration. Or would they? Russian publisher 1C Company proved its dedication to PC flight fans when it released IL-2, a genre-defining masterpiece (and one of the most complex and accurate simulation titles ever published). IL-2 Sturmovik: Birds of Prey sought to bring that same level of realism, immersion and challenge to the console marketplace, and for the most part, 1C doesn't disappoint.

Luckily for most of us, IL-2 Sturmovik: Birds of Prey can adapt to the ability level of the player. The "arcade" level of difficulty (where most of us will spend our time) is a worthwhile enough diversion — a large assortment of mission types and encounters await any would be dogfighter looking to mix things up with Luftwaffe fliers. "Realistic" and "simulation" difficulties amp up the challenge considerably, but also the rewards. Playing Birds of Prey on its easiest difficulty might be a fun diversion for an afternoon or even a weekend, but it kind of misses the point: thoroughly explored, this game is as close as you'll ever come to flying over wartime Europe.

Cockpit view brings immersion to
the next level.

Graphically, Birds of Prey is quite a looker. The dozens of aircraft modeled for the game are rendered out in painstaking detail, and the countryside you'll fly over is both beautiful and functional. The in-cockpit view that's available for the game's fighters (sorry heavy bomber fans — no dice) is an extra treat, giving you a real sense of what it was like to dogfight surrounded by a less-than-ideal cockpit. Sadly, audio presentation doesn't quite live up to Birds of Prey's visual splendors: while combat sounds are both immersive and compelling, radio chatter can at times border on nonsensical. Things happen at a blistering pace in the course of a dogfight — the scripted sound bites which 1C recorded often fall behind the action, leading players to wonder why their flight lead is complimenting them for a kill that was made 30 seconds prior. Still, it's easy to overlook such shortcomings, particularly when competition like Ace Combat sports some of the hokiest in-game dialogue ever.

IL-2's damage effects are amazing —
just look at those bullet holes.While it takes a little getting used to, Birds of Prey's control scheme is quite a joy. In arcade mode, the left stick handles pitch and roll while the right takes care of your plane's throttle and rudder. While these basic controls remain constant throughout the more advanced difficulties, their sensitivity changes drastically. At both "realistic" and "simulation" settings, tapping too hard in any direction will send your aircraft into an uncontrollable death spiral. Stalls are all too common, and the average player is going to have a hard enough time staying in the air let alone shooting down their adversaries. That's where the true challenge lies in Birds of Prey — this game is mastered over the course of a few months, not hours.

There are plenty of online modes to choose from in Birds of Prey, but be warned: competition will be stiff indeed. While I had no problems at all finding pilots to spar against, my first few matches found me scoreless and demoralized. Not since Ridge Racer 6 have I so consistently had my butt kicked by the opposition. This isn't to say that this game's online is flawed — quite the contrary. Players succeed because they're skilled, not because they've made use of an exploit or because they're piloting the "best" plane. Birds of Prey is destined to spawn a small yet highly dedicated online community. There's nothing else quite like it on the Xbox 360 or any other console.

IL-2 Sturmovik: Birds of Prey is a game with few faults. Its controls are excellent, its aircraft are well modeled with each possessing a unique feel and its visual presentation is spectacular. It's hard to compare it to other console titles because frankly, there's nothing else like it. Ace Combat is an excellent arcade flight franchise, but as such, it never asked players to adjust their trim or engage flaps in the midst of a dogfight. Birds of Prey isn't afraid to ask a lot from its audience — by assuming a willingness to learn, 1C has provided one of the most compelling flying games I've ever experienced.