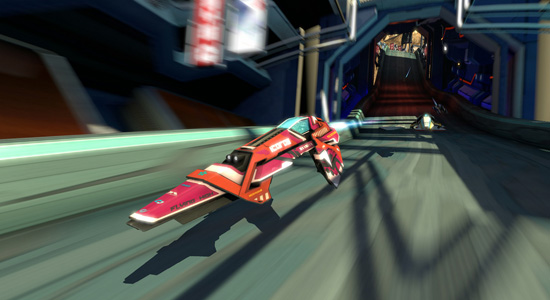 Still the slickest racer on PlayStation.

ow does one define a downloadable product like Wipeout HD: Fury? There's far too much here to call it an add-on pack, yet calling it a sequel would be equally unfair. One thing's for certain: this follow-up to last year's Wipeout HD retains all the original's strengths, standing as one of the most beautiful and challenging racers to be found on any platform. Period.

Basic play mechanics remain relatively unchanged in Fury — careen madly around corkscrewing tracks while trying to beat up and best the times of your opponents. The pace is brutal and challenging, offering novice players little room for error. Sure, there are a few handicaps available such as the "assist" mode (which automatically steers your craft away from the sides of the track) and a novice difficulty setting, but even with these engaged, Fury will seem completely foreign to anyone expecting a run of the mill arcade racer. As I mentioned in last year's review of Wipeout HD: this is one of the only arcade racing games out there which requires you to use your brakes. It will take most gamers a few hours of playtime to master the deft sensitivity of the left and right aerobrakes, but once there, your craft will be glued to the track as if it were traveling on rails.

Fury's most obvious change is the graphical facelift its menus and user interface have received— the stark white backgrounds of last year's game have been replaced with glowing wireframes and an abundant use of Helvetica that can only be described as "90s chic." Supplementing the rave flavor is an aggressive score that serves as a counter to the more mellow grooves of the original Wipeout HD soundtrack. Is this look and sound superior? That's a matter of personal taste, but menu navigation remained straightforward and passerby are bound to be attracted to what's going on onscreen. Speaking of onscreen action, it continues to run in full 1080p at a solid 60fps. In terms of beautiful and fluid motion, no other racing game of this generation comes close.

And now for something completely
different: Detonator mode.Three new gameplay modes await players in Wipeout HD: Fury. Strongest of these is Eliminator — a direct carryover from the PSP versions of Wipeout, players are scored on the damage they do to their opponents rather than their position at the end of the race. Next up is Zone Battle, a peculiar (albeit interesting) race mode in which a vehicle's speed increases based on its position on the track — it's oddly reminiscent of Tron's lightcycle races, and power-ups can quickly turn a race around. Rounding out the list is Detonator, a shooter-on-rails mode in which players must hit targets and survive the quickening pace of their vehicle over time.

Also not to be missed are the requisite new tracks and vehicle types. All eight tracks are once again carryovers from the series' PSP games. While longtime fans would have probably preferred the inclusion of tracks from the PS1 and PS2 titles, the circuits that are included are all solid and masterfully represented. Vehicle additions are perhaps the only thing I can criticize in Fury — while models and handling are great, most are merely upgrades of previous vehicles. As such, the game's traditional balance is slightly unhinged, and a number of older vehicles are basically made obsolete both in the singleplayer campaign and in the online arena. A petty gripe, perhaps, but for a game that's always prided itself on balance, the move seems a bit out of character.

All told, Fury is a bargain that series fans should pick up without any hesitation. $10 isn't much to pay for content that literally doubles the gameplay of the PlayStation 3's best racer. Considering the fact that Wipeout HD was nearly flawless, one can't fault Fury for feeling like "more of the same." While those new to the series will still struggle with the game's controls and mechanics, players willing to invest the time in learning Fury's idiosyncrasies will be treated to one of the most visceral experiences gaming has to offer.