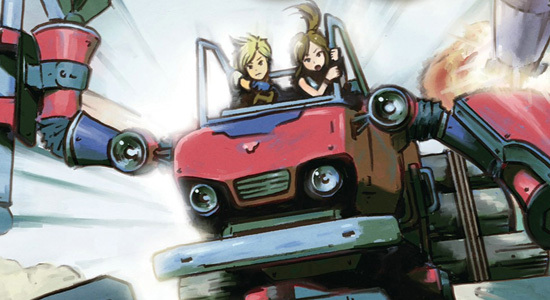 A game looking for its audience.

hat is it about giant robots that seems to capture the imagination? In the eighties, Westerners had the likes of Voltron and Robotech to fuel dreams of becoming a mechwarrior. Meanwhile, slightly older Japanese audiences were watching Mobile Suit Gundam, a series which to this day stands apart for its outstanding (and mature) story. Logically, anime begot video games, and boys and girls the world over were able to come as close as they ever would to piloting those monstrous machines.

Not all fights occur in the arena.

Steambot Chronicles: Battle Tournament, Irem's recent action-adventure title for the PSP, quietly fills a unique niche. While this action/RPG hybrid is sure to draw a fair number of adult players, the game's systems and storyline will hold the greatest appeal for the next generation of mecha fans. From its lush color palette to its simple story and over-the-top English voice cast, everything about Battle Tournament seems designed to appeal to a younger audience. The only indication of this, however, is that "E10+" badge on the face of the game's case. A shame, really — I feel it's unlikely that the game will attract its true audience.

Battle Tournament falls squarely within the steampunk sci-fi archetype— a far cry from the post-apocalyptic worlds and near-future wars which mecha fans are most accustomed to. This unique setting adds to Steambot Chronicles mystique and its kid-friendliness. Colors are vibrant and lush, and cell-shaded, cartoonish graphics hearken back to the look of the PlayStation 2 original from which Battle Tournament draws its inspiration. The gameplay is described as "sandbox-style," a label that's used rather loosely. Sure, players have a great deal of freedom in terms of the order in which they achieve goals and the sorts of jobs they take on to acquire wealth and status, but don't expect any GTA-styled world roaming here — your progression through the game is still rigidly dictated by both narrative and mechanics.

Plenty of customization: check.Playtime is split evenly between basic questing and arena fighting in Battle Tournament. By completing jobs, players will build reputation and unlock a plethora of parts that they can take with them into the game's titular arena battles. Progression is straightforward, perhaps to a fault: complete repetitive jobs; spend earned money to upgrade your mech (ahem… Trotmobile); compete in arena versus battles; and then repeat. For a younger player that's concerned more with collecting parts than a complex narrative, the formula is perfect. I'm afraid that I, however, was left wanting for more.

As with most mech games, your main objective in Battle Tournament is collecting parts to make your mech (Trotmobile) more powerful. While combat can take place in the game's overworld, the bulk of combat challenges will come through one-versus-one arena battles. You can tailor your Trotmobile for speed, power or something in between. Control is rather straightforward, and though there are plenty of parts to choose from, the construction process isn't overly detailed — you'll be picking out arms and legs, not carburetors. Having played my share of Armored Core, I actually found this to be a tad refreshing.

If I had any major complaints with Battle Tournament, it would be that there was far too little diversity in the jobs you can take on between arena bouts. Collect this or deliver that, it was all pretty much the same. Still, the game's core mechanics were sound, and the quests' repetitive nature both improved accessibility and made Battle Tournament easy to pick up and play in short bursts. The game's narrative and voice acting might have lacked a certain sophistication, but the lighthearted nature of encounters makes it easy to recommend this one to younger players.

While it may not take hardcore mecha fans by storm, Battle Tournament ably fills a void in the genre — it stands alone as both an accessible mobile experience and a game which I'd have no qualms about gifting to a grade-schooler. Publishers should learn a lesson from releases like this: packaging decisions aren't always best left till the last minute. With a bit more care, Battle Tournament could have landed in the hands of an adoring audience. As a thirty-something mecha fan, I'm left wanting a bit more.