Marvel vs. Capcom 2 on Game and Player 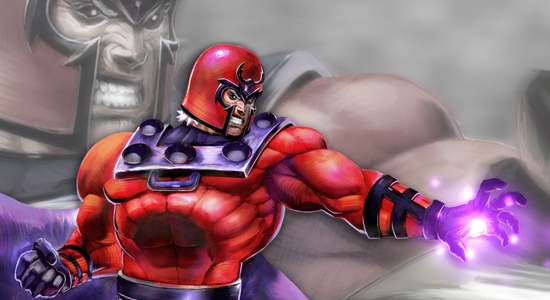 arvel vs. Capcom 2 combined two of my favorite fictional universe in an explosively eccentric 2D fighting game. As a long-term Street Fighter fan, and also a childhood aficionado of Marvel Comics, I was overjoyed to see Capcom smash the two unique worlds together in a wonderful juxtaposition.

When I initially got my hands on Marvel vs. Capcom 2, I was a little disappointed. Mentally, I was still playing Street Fighter II, but before me was a game that failed to fit the mold of the genre I had become so accustomed to — for the first time in years, I was forced to learn something new, from something familiar. And much like the divided roster of characters in the game, players will find themselves enjoying Marvel vs. Capcom 2 in very distinct ways. For those finding themselves in between camps, it's a more problematic proposition.

For occasional bouts, casual fight fans will find an electrically charged experience. The ability to pick and choose from a raft of characters ranging from the iconic to the truly obscure and throw them into the chaotic tag-team action is a genuine thrill, and many will be excited by the prospect of teaming Ryu, Ken and Mega Man with the likes of Spider-Man and Captain America. The controls are stripped down and simplified from more mainstream games within the genre, and the high-tempo, exaggerated action allows for a real blast of adrenaline, sugarcoated in overly bright vivid colors, with all the flashy backgrounds and dazzling super combos one could hope for. It's an assault on the eyelids, but never lets your tear your gaze away for long.

Visually, the game makes less of a splash than Street Fighter II Turbo: HD Remix, but still holds up very well in the transition to high definition. The original (and preferred) 4:3 display is coupled with the option to artificially extend the on-screen image to fit 16:9 monitors, the action occurring within the confines of an invisible a bounding box, as not to unsettle the original gameplay. Three display modes are offered to adjust the look of the characters, but the original sprite work still looks great to this day, especially without the new pixel-smoothing filter.

The true legacy of Marvel vs. Capcom 2 resides in the world of the obsessive few. Despite the game having a deliberately accessible button system, a whole new challenge awaits those willing to delve deeper. Combination moves have been a huge part of successful play in the 2D fighter, but Marvel vs. Capcom 2 consciously elevated the importance of the combo to frankly ludicrous levels. Endless loops, punishing juggles and mind-blowing century combos are the name of the game, and it's a truly electric atmosphere when something big is unleashed.

You lose, again: multiplayer
is not for the faint of heart.There is plenty to pour over, and the chance to learn one of the most viciously competitive 2D fighters of all time in this new release is a fantastic opportunity for the worthy to cut their teeth. Be aware however, that no matter how eager a challenger you may be, the big boys have had a long head start to commit every single button input to muscle memory — the online mode will not be for the faint of heart, or those who have a problem with defeat.

Marvel vs. Capcom 2 is an admirable re-working of a much loved fighter. It's not a perfect emulation — there are strange visual errors every so often, and no matter how good the port may be, nothing is going to make the infamous soundtrack any more bearable. However it delivers a near mirror-image of the Dreamcast version in a nicely polished HD package. Some of the old exploits still remain, the 16:9 screen effect feels artificial and is often a distraction, the pixel smoothing filter is a waste of time, and its eventually steep learning curve and the unavoidable skill gap between new players and entrenched veterans is likely to be insurmountable. Yet for all this — unless somehow entirely unmoved by the heady mix of the unusual crossover, the flashy visuals, the lightning pace and near infinite potential for perfection — it represents one of the best fighting games available in this, or any, generation.