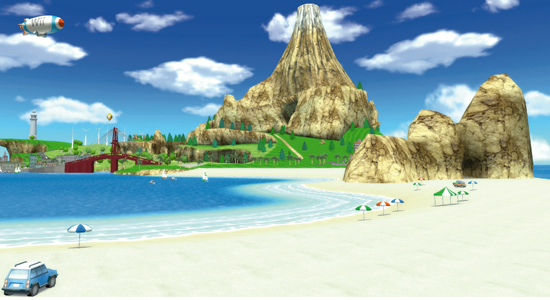 undling Wii Sports with every Wii was a stroke of genius by Nintendo. Not only did it provide buyers with a substantial game included with the price of the console, but it also showcased some of the platform's key features such as the motion controls and the Mii avatar system.

Three years later, the long awaited follow-up Wii Sports Resort is finally with us, pioneering the new Wii MotionPlus technology but carrying a full retail price. Can this new collection of summer-themed mini-games and the promise of enhanced one-to-one motion controls justify such a price tag?

Each sport comes in
two or three variants of play.

Resort comes with twelve types of sports, by means of ten brand new and two returning favorites. While this may not sound like a lot to fans of more recent Wii-based sports compilations like Mario & Sonic at the Olympic Games, each comes in two or three variants of play. For example, Table Tennis has a standard one-versus-one match, but also the furious Return Match mode where you have string together as many return shots as possible.

On the whole though, Resort wisely sacrifices quantity for quality putting most rival games to shame in terms of activities you'd actually want to play over and over again. The much-hyped Sword Play, Frisbee, Basketball and Archery typify that Wii Sports philosophy of being easy to pick up and play but housing a surprising amount of depth.

Backed up with the added sensitivity of MotionPlus and surprisingly realistic physics, the best games of the bunch just feel right: the replication of drawing back an arrow and releasing it, the slight vibration as your paddle makes contact with the ball, the subtle flick of your wrist determining whether or not your shot makes the basket. Resort really does capture the essence of many of the sports that it mimics, providing some incredibly visceral game play that's never before been experienced with such fidelity. If that's not a reason to get your hands on this game, I don't know what is.

The best games of the bunch
just feel right.Unfortunately, not all sports within are that incredible. A few such as Canoeing and Power Cruising end up not being all that fun due to real physical exersion being required. However, the only truly bad game type is Cycling, which fails to replicate the activity it's based on and isn't satisfying to play, basically amounting to little more than waggling the remote and nunchuk up and down repeatedly.

Aside from the disappointment of Cycling, the only other concern with the game is that at least one additional remote with a MotionPlus unit is required to play absolutely every mode. Granted, if you've got a Wii you probably own at least one other controller, but purchasing more of the newly released add-ons will set you back $20 apiece. In theory they'll be worth the investment for use in the future, as support for the peripheral has been promised with many upcoming games including Red Steel 2 and the next Legend of Zelda. Additionally, the vast majority of sports in Resort can be played in a turn-taking fashion, so you can still have a great multiplayer experience passing around one remote, MotionPlus and nunchuk from player to player.

For many people the original Wii Sports alone was justification enough for purchasing a Wii. Given the sheer amount of improvements over its predecessor in both content and quality, not to mention offering perhaps the most intuitive gaming experience yet, Wii Sports Resort is absolutely worth its comparatively small price tag. So gather your friends and family around the TV once again; the Wii's stranglehold on family-friendly gaming looks to continue for quite some time.