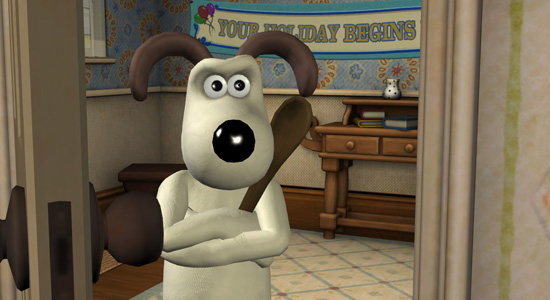 oint-and-click adventure is a genre which pretty much fell off the PC radar towards the end of the 90s. Despite the past successes of developers like Sierra Entertainment and LucasArts, players were quickly being swept away by flashier 3D experiences — some might say that the industry lost its innocence when King's Quest gave way to Doom. Whatever one's take, point-and-click gaming has had a bit of a resurgence as of late thanks to episodic release formats, in particular the work of developer Telltale Games. Their latest endeavor, Wallace & Gromit's Grand Adventures, expertly straddles the line between nostalgic adventuring and modern-day fun.

Someone had too much fun.

For those unfamiliar with this distinctly British franchise, Wallace is a charming (yet witless) inventor and Gromit is his brilliant (and patient) canine pal. Their adventures have spanned numerous short films and a 2005 theatrical release. These claymation productions, all helmed by director Nick Park, possess a visual styling and attention to detail that's hard to overlook. Viewers of all ages will find something to enjoy in the Park films, and much the same can be said for Telltale's Grand Adventures.

This is Wallace & Gromit, all right.From the moment one fires up Fright of the Bumblebees, the first of Telltale Game's four episodic releases, the experience is distinctly Wallace & Gromit. From soundtrack to visuals, it would be easy to mistake these games for one of Nick Park's productions — character models appear to be sculpted from clay, their movements and expressions spot on. From a production standpoint, my only criticism is that Wallace isn't voiced by Peter Sallis. Ben Whitehead, who lent his talents to past Park projects, does an outstanding job voicing the role, but longtime fans will definitely notice the change. Otherwise, nothing seems out of place. Garden gnomes are present and accounted for, the cupboards are stocked full of cheese and crackers — this is Wallace & Gromit, all right.

In terms of gameplay, Grand Adventures is a classic point-and-click adventure with a modern twist. Traditional object gathering and puzzle solving are complemented by full 3-D movement courtesy of keyboard controls. Navigating the game's environments is simple enough, though occasionally things are made a bit more difficult by awkward camera angles. Still, this is by no means a deal breaker — overall, Telltale exercised a great deal of common sense in positioning the camera, even when they chose to emphasize the "cinematic" over the "functional."

Once again: too much fun.As for the puzzles themselves, these could sort of be a mixed bag. As with any adventure game, what seemed perfectly sensible to a developer could prove a flummoxing conundrum to the average player. Particularly for those with little exposure to the point-and-click genre, it may take a bit of acclimation to start thinking in the same manner as the staff at Telltale. Still, once you remember to leave no icon un-clicked, things begin to move along at a healthy clip. All told, Fright of the Bumblebees clocks in at around four hours. Not much, perhaps, but at $10 an episode, Grand Adventures seems fairly priced.

Telltale has already delivered the first two episodes of Grand Adventures. Fright of the Bumblebees highlights a scheme to pay for a bit of property damage (don't ask) by producing copious amounts of honey. The Last Resort tells the tale of a rained-out holiday, a makeshift basement getaway and some dissatisfied customers. Like everything that's ever borne the Wallace & Gromit moniker, both are good clean fun that even the most hardened heart will appreciate. Revolutionary games? Perhaps not, but great entertainment and a testament to the episodic release model. Kudos to Telltale Games for bringing new life to an outstanding franchise (and an almost forgotten genre).