Terminator Salvation on Game and Player 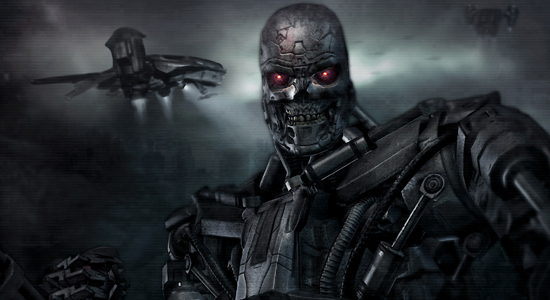 Short, repetitive and pedestrian in nearly every aspect.

ave you ever played a game or seen a movie that wasn't technically bad but then wasn't particularly good, either? Do you remember walking away from it and months down the line struggling to remember anything about it? Terminator Salvation is one such game.

Set before the events of the summer blockbuster of the same name, players assume the role of John Connor battling the machines of Skynet in the post-apocalyptic future. That is pretty much the extent of the entire paper-thin story, with nothing really being achieved by the end of the game other than introducing a couple of secondary characters who appear in the film. While there are a few lines of dialogue that hark back to Connor's experiences in the previous movies, fans that skip the game can rest assured that they won't be missing any significant story or character development that carries over to the new flick.

Not completely repetitious:
vehicle levels help to break up
the on-foot sections.

Along with its story, Salvation's presentation is also pretty spotty. The first thing you notice is the main character looks like a generic marine, with John Connor actor Christian Bale having apparently refused to sign over his likeness rights for the game. However, the characters of Barnes and Blair appear as they do in the movie and are voiced by their respective actors, which is a weird inconsistency between game and film.

The graphics overall are not great, with generally low polygon counts and some hideously low-resolution textures noticeable at times. Even on the technically superior PlayStation 3 this looks more like an up-scanned, last-generation game. The general aesthetic of this post-apocalyptic future will be more familiar to people who have played something like Fallout 3, rather than Terminator fans. With its ruined Los Angeles filled with earthy browns and stony grays, this is sadly a far cry from the stylish, dark, blue-hued battle zones seen in the first three Terminator films. While this is obviously a consequence of being based on the latest film, this is one of many examples where a little bit of fan service could have gone a long way.

As lackluster as most of the Terminator Salvation is, the basic gameplay is pretty solid. It borrows heavily from Epic's Gears of War series utilizing not only a similar cover system but also several vehicle-based turret sections. While this does nothing to it carve out a niche for itself, it apes these games well enough that it handles like a competent clone. The aforementioned vehicle levels help to break up the on-foot sections, but the repetitive nature of game quickly sets in. Within the first hour or so players will have fought nearly all of the five different enemy types in the game multiple times.

Not only that, but each enemy has one set weak point or specific weapon that is best to take them down, meaning there is pretty much no variety to be had from encounter to encounter. For example, the crab-like T-7-T machines need to be flanked and attacked from behind, and the flying Aerostat drones are most susceptible to shotgun blasts. The game isn't difficult, either, with every set piece seemingly having a vantage point to always give the player the edge over the machines, though this is sometimes a blessing given that your unintelligent AI partners don't really prove that helpful.

Overall graphics: not great.Salvation's most glaring flaw though is its longevity. I completed the whole game on the medium difficulty setting in under five hours, and if you bring a friend along for co-op it can be beaten even faster still. With no other multiplayer modes and only a couple of trophies on offer for completing the campaign again on the hard difficulty setting, this severely cripples Salvation's value for money. On the other hand, trophy hunters could see this briefness as a bonus, given that every single one can be earned in one playthrough on hard mode.

Ultimately, Terminator Salvation will be remembered (if remembered at all) for feeling more like a downloadable game rather than a full retail title. It's short, repetitive and pedestrian in nearly every aspect. Even the most die-hard Terminator fans will find little of interest here, missing much of the personality of the movies, providing little to no character or plot development. Other than the metallic endoskeletons of the T-600s, nothing here manages to shine.