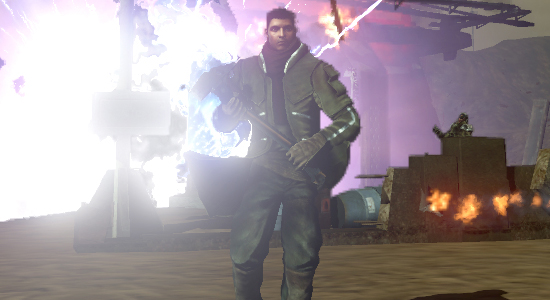 ed Faction: Guerrilla has been described as a "summer blockbuster" of video games. In that it's big, fun, though not particularly clever, I'd say that's a pretty good analogy.

Finding themselves in the shoes of miner Alec Mason, players are quickly enlisted into the Red Faction, a rebel group attempting to liberate Mars from the oppressive Earth Defense Force (EDF). From there, it's an adventure of exploration, expansion and, most importantly, destruction.

At the heart of Guerrilla is the Geomod (or Geographic Modification) 2.0 engine. While the first two Red Faction games used a previous version of the destruction engine, they were restricted by the current generation of hardware. In fact, without resorting to cheat codes for an abundance of explosive ammo, most gamers never got a chance to fully test the limits of the Geomod.

It's hard to describe just
how satisfying the destruction is.

Thankfully, in Guerrilla ammo is plentiful and since nearly everything on Mars is owned by the EDF, you have free rein to smash, explode and crash your way through the highly destructible buildings. Any man-made structure on the terrain can be taken apart, and whether you choose to do this with your trusty sledgehammer, tactically placed explosives, or with a speeding vehicle, it's up to you. It's hard to describe just how satisfying the destruction is, you really have to see it in motion to believe it, but personally it had me hooked from the first time I smashed clean through a three-story building, sending girders and rubble splintering away, leaving a comedic mech-shaped hole behind me.

On top of the greatly improved Geomod, Guerrilla mixes things up even further for the series by pulling the camera back into a third-perspective for the first time, whilst also doing away with a linear story mode in favor of an open-world. Progress is made both by destroying critical EDF structures and completing specific missions for the Red Faction, with the former lowering the EDF's power and the latter raising the rebellion's morale. When you max out these progression bars in one region, it enables the Red Faction to expand into a new territory, where the cycle repeats again. Though straightforward, the game is paced pretty well, never requiring you to stay in one zone for too long. Plus, you are constantly accruing salvage, the game's currency, which can be traded for new weapons and upgrades for your character.

On top of the hefty single-player campaign, the game also ships with an impressive multiplayer package. Online play can utilize up to sixteen-player games and features the standard deathmatch and objective-based game types but with Geomod-flavored twists. For instance, Damage Control plays like a Territories-type mode where both teams battle to control three zones on the map by destroying and placing nodes within. One mode that couldn't be achieved without the Geomod is Siege, where each team takes in turns defending huge structures while the other attempts to demolish them. The developers also took many of the lessons learned from some of the most popular online shooters, combining the matchmaking system of the Halo series and the XP-based leveling mechanic from the recent Call of Duty games to help create an effortless and addictive online experience.

Too little, too late: allied NPCs
show up just outside the nick of time.If that wasn't enough for you, a second pass-the-controller style multiplayer mode is provided for offline players. As its name suggests, Wrecking Crew is focused on players taking turns competing to see how much damage they can inflict on a building site with the time and weapons provided. While not as engaging or diverse as the online, it's good, simple fun that pretty much anyone regardless of Red Faction experience can enjoy in short bursts. On the whole, the multiplayer is almost up there with the likes of Halo and COD in terms of quality and substance, and if you enjoyed Guerrilla's campaign there's a good chance you're going to put a fair few hours into this side of the game as well.

Unfortunately, Guerrilla is not all fun, all the time. Later in the campaign, it will be pretty standard for the game to spawn in an insane amount of EDF troops, often just a few feet from you. Compounding these matters further is the inability to party up with allied NPCs outside of set missions. When you're in a particularly heated firefight, eventually some fellow rebels will turn up to reinforce you, but it would have made sense for you to be able take them along to begin with. I died quite a few times on the default settings because of such issues, though thankfully the game's difficulty can be changed at any time, and won't effect your achievement or trophy progress.

Red Faction: Guerrilla has been described by some as Grand Theft Auto: Mars, but in truth is closer to the Mercenaries or Saint's Row games. It chooses to focus more on visceral, explosive fun rather than story, character or a particularly realistic world. It's definitely not one for the video games as art debate, but if you're looking for another great sandbox romp, the Red Faction is now recruiting.