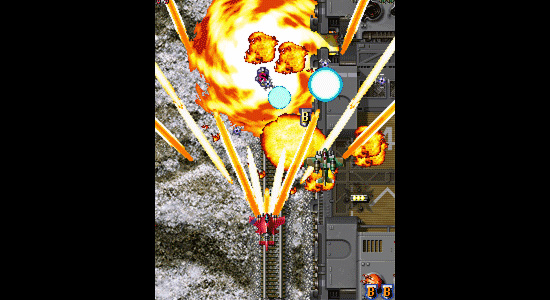 o review Raiden Fighters Aces based solely on its content would sort of be like reviewing the 1997 re-release of Star Wars and describing Mark Hamill's performance as "wooden" — the three games which make up this greatest hits collection already proved themselves in the world's arcades throughout the mid-nineties. With that out of the way, it's perfectly justifiable to place Raiden Fighters Aces' packaging under the microscope. Japanese developer Gulti did well to the bulk of these titles as-is, but by including a few modern conveniences to this classic package, they could have shifted it from niche product to must-have.

For those not in the know, the Raiden games are a series of shoot-'em-ups (shmups) that began with a 1990 arcade release. Players pilot a futuristic fighter plane as they fly against massive waves of ground and air-based enemies. Most levels are relatively short and culminate in a battle with a massive boss. Developer/publisher Seibu Kaihatsu created or licensed no fewer than eight games in the series over the past twenty years — while some might criticize the series' lack of diversity, these games stand out for their stellar controls and outstanding cooperative mechanics. Raiden Fighters Aces repackages three of the series' most notable titles: Raiden Fighters, Raiden Fighters 2 and Raiden Fighters Jet.

The three Fighters games, while bringing little innovation to the shmup genre, bring plenty of new material to the Raiden franchise — each game lets players choose from between a dozen or more aircraft. More than just skin modifications, each new plane responds or behaves uniquely, beckoning experimentation as players strive for the highest score possible. These are arcade games, after all. Here, braggarts show their stuff by rising to the top of leader boards rather than teabagging vanquished foes. Collaboration is also possible thanks to well-integrated cooperative play.

But therein lies one of my biggest complaints with this re-release. While local cooperative play is possible (and an absolute blast) on a single Xbox 360, Live functionality only goes so far as online leader board support. As much as I want to play Raiden Fighters with friends that span the globe, I can't. In an age where 3D games can be enjoyed by players separated by oceans, why shouldn't it be feasible to tack on online options to games that are fifteen years old?

Another head-scratcher is publisher Valcon's decision to distribute Raiden Fighters Aces as a traditional retail release rather than a download on the Xbox Live Marketplace. While its $20 asking price is more than reasonable (and a downright bargain for hardcore fans), one can't help but think more copies could have been moved if it had been treated like other recent arcade re-releases — a product ripe for exploitation via digital distribution. Right now, the only folks likely to find this game are diehard shmup fans or frugal gamers looking for a bargain.

Of course, I can't let any of this detract from a simple fact: these three games mark a high point for a genre that's fallen to the wayside. Online multiplayer or no, the Raiden Fighters games highlight the amazing 2D work that a handful of dedicated developers continued to do throughout the nineties. Younger gamers will remember games like Call of Duty 4 as the great "shooters" of their time. Those of my generation who grew up alongside the Sega Genesis and SNES will recognize these games as their own sort of holy grail. Flaws aside, its great to finally have three of the best arcade shooters ever published made available for home play. Shmup fans: take note.