Prototype on Game and Player 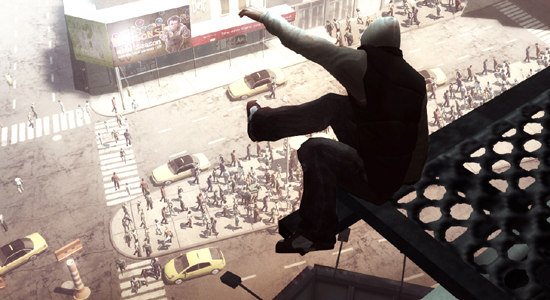 An amazing tale is undermined by inattention to normalcy.

rototype deals much in the currency of mayhem but hedges on the prime for a steep loss. Depicting Manhattan ravaged by a mega-virus and haunted by an incidental hero, Radical Entertainment has magnified horror and human feats to a monumental scale without anywhere to put it all, rendering the game implausible and less fun to play through inattention to the single most important element in amazing tales: normalcy.

That viruses are biologically indefinite receives early recognition, as protagonist Alex Mercer awakens from under a coroner's knife. Mercer dresses in street style, with hoodie, jacket and jeans; yet he is a scientist, or recalls that he used to be, once he is reunited with his sister, Dana, and begins to repair a shattered memory. How did he find his sister? By using powers that have appeared spontaneously, allowing with the crimson-umber flick of viscera to extrude and extend limbs, run at 25 miles per hour, leap upward indefinitely then glide down, and shape-shift upon consuming a living human being. Mercer absorbs a hostile black-ops soldier, the first of many, and learns of a conspiracy that he challenged five years ago — and will try to bring down again.

Players advance along the storyline through missions, begun at checkpoints and either driven by new information or instigated by other characters; but may choose to participate in shorter, simpler, timed side-missions scattered across the island. Checkpoints are numerous, though hardwired. The save function appears redundant, insofar as incomplete missions may need to be replayed in their entirety.

Engagements are as gory
as they are intense.Every activity earns a player experience for purchasing and upgrading Mercer's special abilities, so those who are roving and resourceful will accumulate a lot of points to spend. Where some developers have prolonged a short modification track stingily, Radical's abundant rewards enable quick and steady improvements — and access to Prototype's sterling features.

Alex Mercer traverses Manhattan as we might imagine a bird negotiates a forest: balletic and undaunted, somehow. As noted everywhere, there is a little of Spiderman and a little of Mirror's Edge. Skyscrapers become escarpments, rooftops become waypoints, the ground becomes circumstantial and distances are reduced to matters of time and trajectory. Accompanying controller rumble adds even more excitement to an activity that simply feels good.

Combat is heightened by the same exponent. Mercer can puncture steel, so mere flesh and blood runs freely. Engagements are as gory as they are intense. Prototype's elective targeting system is finicky and battles occasionally push and pull Mercer to the point of helplessness, though as every ability has been designed to countervail an enemy tactic, players are obliged to keep Mercer's power commensurate to whatever comes next — missions may be aborted if some meta-human investment is necessary. And because Mercer is dwarfed by the forces arrayed against him, he must eventually bound out of sight and disguise himself, or if his charade has been exposed, assume a new face.

Players embracing these mechanics will be encouraged to explore, whereupon they will soon exceed the boundaries of the environment, the ongoing disaster, and Prototype's premise itself. Although most landmarks can be visited — one can in fact stand atop the Empire State Building — this place merely resembles New York City. The original Gotham is, in the game, cleaner than Cincinnati, an oversight without defense after titles over the last five years have ably portrayed weathering, age and grime.

The city bustles — at first glance. Pedestrians walk along sidewalks and fairways exclusively, remaining on the ground in an urban landscape that reaches hundreds of feet into the air. Hiding from the enemy or stalking for a new disguise could have been a devilish challenge, real games of cat-and-mouse; but for the relegation of people in unerring lines. No open windows, no activity whatsoever, in high-rises? No solitary walkers? No hoodlums, drunks or backstreet deals — when Mercer must abscond, he enters disenchantingly vacant places. Sometimes ducking under awning does the trick, as passerby are only momentarily startled. And even then, Mercer doesn't brush past, or shoulder. He roughly shoves — shouldn't a man on the run care more for subtlety?

Unrealistic mass behavior causes
irreparable damage to the
game's sense of purpose.Moving up the scale, sites of explosive vehicle battles and neighborhoods overtaken by plague abut streets that remain totally undisturbed — even after tanks have been rolling through the streets for days, entire city blocks turned to smoldering abattoirs, traffic and crowds carry on lazily a few hundred meters away. Radical tries to build tension through mobs of citizens fleeing from viral abominations or soldiers sent to kill pathogens and witnesses. But panic is consummative, not static. Instead of appearing to slide into worsening chaos, Prototype's New York streets look like a movie set full of extras performing take after take of Bedlam Scene, perpetually running in circles. A narrative relying on atmosphere veers into unintentional comedy, and the damage inflicted on the game's sense of purpose is irreparable.

Are these fair judgments? After all, most games express history or realism figuratively. Well, proper sandbox titles Grand Theft Auto and Oblivion succeed because the player has been offered only enough stimulation to perceive, and therefore judge, the title as fanciful. People behave in funny ways and we accept it. For Prototype, in spite of good functional and visual design, the effort at precision is insufficient and fatal. Radical, in its construction, may well have stumbled into the uncanny valley, inviting psychological appreciation that immediately rejects the world as false. The silver lining of Prototype: an unfolding catastrophe could be simulated, someday, since it presently cannot.