Ghostbusters: The Video Game on Game and Player 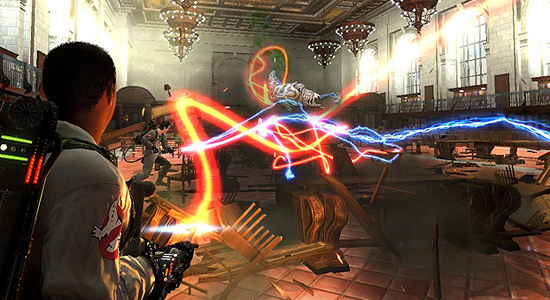 If only all movie games were this good.

cto 1 blasts through the streets of Midtown Manhattan, sirens wailing and lights flashing; familiar theme music thumps out in stereo; voice actors sound uncannily like Bill Murray, Dan Aykroyd, Harold Ramis and Ernie Hudson (because they are); the one-liners fly with the rapidity of machine gun fire. While it might be easy to mistake what you're seeing for the oft dreamed about Ghostbusters 3 (Aykroyd said as much himself during an early production interview), what you're watching isn't a movie at all. Ghostbusters: The Video Game stands out as a wake-up call to an industry. This is movie-based gaming done right, and then some.

Ghostbusters had some mighty big shoes to fill, and it does so ably — despite game play which at times can be downright average, the writing chops of Ramis and Akroyd coupled with an ensemble cast and stellar production values never cease to impress. The game takes place in 1991, and you play the role of an unnamed fifth Ghostbuster — unnamed for obvious reasons, for Peter Venkman (Bill Murray) "never likes to get too attached." This formula works beautifully, allowing the original talent to strut their stuff unhindered by ancillary characters that serve only to facilitate play. It's a strategy that works well, as it's so out in the open from the get-go (your character's name badge reads "Rookie") that it never gets in the way. Taking place a couple years after the events of the second film, you and the other Ghostbusters try to make sense of an apparent resurgence in "Gozer activity" — it seems as though some ghosts just don't want to die. The eight hours of gameplay that ensues is full of familiar faces and some of the wittiest banter the franchise has ever produced.

At its basest level, Ghostbusters is a third-person shooter. The camera hovers over "the rookie's" shoulders as he and his partners use their proton packs to blast and subdue and sometimes trap their undead adversaries. A legitimate complaint is that all too often, Ghostbusters behaves as a standard shoot-em'-up. Still, for every ghost that merely vaporizes as they're hit by one of your proton packs four upgradeable fire modes, there are plenty of larger adversaries who must be subdued and trapped in traditional Ghostbusters fashion. The tug of war that makes up such encounters never gets old, and leads to some interesting mechanics during some of the game's boss battles.

Ghostbusters offers a number of varied multiplayer experiences. These cooperative modes let you choose your favorite Ghostbuster and take on various extermination jobs. The co-op "campaign" pieces together a few of these mini-games into a larger chunk — while not quite the same as a true cooperative play through of the main game, I could see how this would be a blast for some friends online. There were a few matchmaking problems (particularly for the one hosting the game) at Ghostbuster's outset, but I'd imagine these will be corrected with a future patch.

So, is Ghostbusters pure genius from start to finish? Most certainly not, but I can almost guarantee you'll have a smile on your face the whole way through. This title has always been more about reliving childhood memories than providing groundbreaking gameplay — that developer Terminal Reality did such a competent job crafting Ghostbusters is the icing on the cake. Sporting one of the best scripts to ever grace a console game, one can only hope that Ghostbusters' success will mark a new era for publishers — one where writing is valued as much, if not more so than flashy physics engines and polygon counts. Fans of all ages: get out there and bust some ghosts!