Damnation on Game and Player 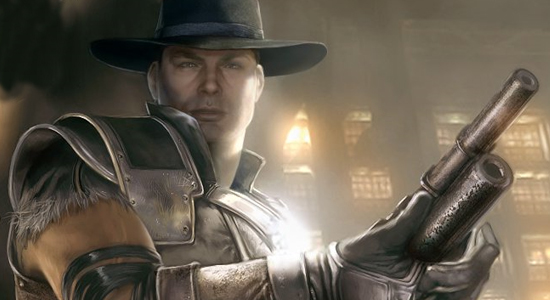 f irreverent, a succinct definition of steampunk doctors a photographic portrait of Abraham Lincoln to show a gatling gun replacing the president's arm. Even in spite of rarity owing to its aesthetic delicacy, cyberpunk is recognized and validated in science fiction. Steampunk, where Queen Victoria meets Henry Ford, remains a tentative variant — with sustainable gameplay, publisher Codemasters' Damnation would have been a welcome rarity. The industry, unfortunately, has so-so action-shooters in surfeit, and this title joins the pile.

Going places: the game's mechanics
and adequacy lie in platforming.

Damnation's plot at first observes tenets of the genre, issuing through an alternative time line. When, during the Civil War, science lunges toward mass production, the fortunes and standing of one William Dean Prescott surpass those of the Union and Confederacy. The entrepreneur turns plutocrat, transforms Prescott Standard Industries (PSI) into a military organization and — infusing an army of impassive supermen with a kiwifruit-juice-colored liquid called Serum — proceeds to conquer the states and territories. A classically Western heroic ensemble — soldier, scientist, belle, brave, Mexican — embraces titanic odds to confront and defeat Prescott.

Presumed a shooter, Damnation isn't, much: its mechanics and singular adequacy lie in platforming. While not on the mastodonic scale of Prince of Persia, nor cohesively steampunk, Damnation's continental landscapes upheave and drive deeply into the earth. Sweeping pans survey an obligated path, slowing conspicuously at interchanges and transition points, offering players graceful and practical guidance. Sequences are short and uncomplicated, difficult to discern only when they stray from established rules governing scalable objects that include the railing and molding of walls, poles and hoist ropes, roofs and zip-lines.

Breakneck vehicle rides through cave tunnels, up mountains and astride deserts reveal environments as even larger and more scandent. Aside from an inconveniently low camera vantage, another imposition of awfully modern equipment, and a few obscure twists that only can be negotiated the second or third go-round, these passages are easily Damnation's most thrilling.

Combat interjects to remind a player of all that is mechanically and stylistically wrong with the game. Weapons number six or seven or so. They behave perfunctorily, distinguished simply by range, reticule size and forms that are faintly steampunk. Worse, not only does the third-person perspective withhold vicarious sensations, like controller-rumble for kick, weapons also share the same tinny, abrasive noise. Gunfights could have been shootouts — made carefully impressive or lovingly campy with the sounds of fired shots and ricocheting bullets. Who would know James West without his newfangled accessories and their whirrs, bangs and whizzes? Like cyberpunk, steampunk succeeds by transporting audiences through a synthesis of ordinary and otherworldly. As Damnation offers very little of that blend, the theme begins to collapse.

Enemies include a variety of PSI soldiers and citizens driven to madness by Serum poisoning, but none of them is intentionally memorable. Soldiers wear suits and yell something, from behind steel masks, which one can almost make out as "Get this off of me!" Serum-sick are half-naked and mindless, charging the player character; the stick-figured "fevered" in their awkward gait and the "scavengers" on all fours. The latter clash with the milieu, while soldiers are but a loose fit. Bullet-strikes do not cause targets to so much as flinch, nor is marksmanship rewarded: a few hits to the temple, a few hits to the elbow, whatever; they slump over. To bizarrely comical effect, all enemies burst into pieces when caught near anachronistic exploding barrels; gratuitous on one hand and amusing, given the cartoonish dismemberment, on the other. None of them acknowledge one another or interact, let alone cooperate. Some do not even notice a player's approach.

Just another shootout:
steampunk could have at least
made combat enjoyable.Allies labor under the same, dumb artificial intelligence, their programmed responses to a player's reaching a checkpoint transparent. Players will find their characters alone, as NPCs hang back (or run in circles) until one point has been crossed before rushing (or are actually teleported) into view — and then suddenly push ahead through the next platforming sequence.

The characters themselves correspondingly disappoint as they traipse along a multiply dislocated narrative. Damnation's voice actors are unenthusiastic performers if not altogether miscast. The soldier and the scientist carry on, respectively terse and stoic, conveying more about the plainness of the roles than dramatic investment. The brave and the belle, each one's actress shrewish and neither apt, preclude sympathy. Only the bumptious, irascible Mexican — indebted, perhaps to an echo of The Good, the Bad and the Ugly's Tuco — provokes interest with his tiny share of screen time. The game's spiritlessness can even be heard in PSI propaganda broadcasts; whereas Wallace Breen's rebuke of Half-Life 2's trans-human junta disclosed the frangible bargain cut by a traitor, Prescott's overture, with its stolid invariability, drones. A final series of insults comes from loading screens that, indeed, interrupt cutscenes — mid-sentence, no less.

Prospect Damnation long enough and most of what constitutes the appropriate genres might be extracted and pieced together, but hodge-podge doesn't make a movement, and besides, competent assembly is designers' work.